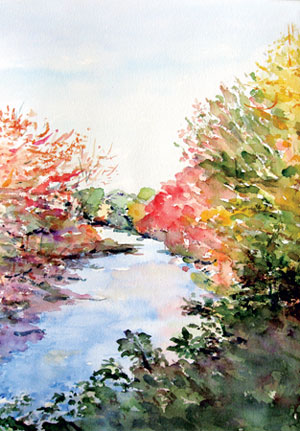 For more than 75 years, the Wellesley Society of Artists (WSA) has been welcoming newcomers into its fold to encourage artistic vision and to offer local venues in which to exhibit their work. Today, membership is strong at around 70 to 75 professional and emerging artists who work in a variety of media.

Phyllis Paster of Wellesley said she was inspired to seek membership in 2004 after viewing one of the Society’s exhibits at the Wellesley Free Library. To be admitted as an Artist Member, she had to submit three works for review by a rotating jury of current members, a process that takes place three times a year. Each work must be two-dimensional and framed; no photography or sculpture is permitted.

Paster was accepted, but was careful to point out that the jury process is not designed to intimidate or discourage novice artists. All are welcome. Those who are not ready to exhibit their work can join as Associate Members, she said, and have full access to WSA social gatherings, workshops, and lectures. Topics range from hiring models, to artist demonstrations, to sales representatives from various art suppliers displaying their wares.

Paster said she particularly enjoyed trying the acrylic paint samples provided by a representative from GOLDEN Artist Colors, Inc. Paster dutifully experimented at home with what she found in her goodie bag, but in the end could not be persuaded to switch from her beloved watercolors.

She carries photos of some of her favorite work in small albums called “click books.” So named, Paster explained, because something about the process “clicks” for the artist during the making of a piece—a technique or style that they’ll be reminded of when sharing the image with another. “It’s like a record of our growth and development as an artist.”

And it helps to have feedback and be pushed to take risks, says current WSA president Yale Nicolls. “I wouldn’t be painting if I wasn’t in a group; there are so many excuses,” she said, as everyone’s schedule today seems so full. Knowing there’s a show on the horizon, however, is often motivation enough for Nicolls to carve out time for her art. 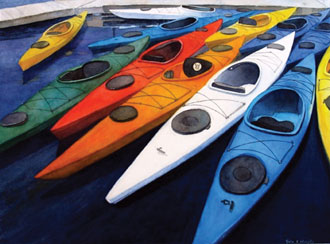 The Early Years
It was the vibrant spirit of Elizabeth H. T. Huntington that first brought artists from the community together in the midst of the Great Depression. She painted right up until her death in 1963, some 5,000 oils, pastels, and watercolors in all. Her work can still be purchased at auction today.

Born in South Braintree in 1878, Elizabeth Hamilton Thayer was related to the painter Abbot Thayer and, on her mother’s side, to Alexander Hamilton. She attended Massachusetts College of Art in Boston and studied under Ernest Lee Major. She contracted polio during her engagement to Raymond Huntington, but he remained faithful and the couple married and settled in Wellesley. They were known to rise before dawn to drive to the White Mountains in New Hampshire where she would paint from a special desk he had built into the car. They would return before sunset, however, because they could not afford an overnight stay.

Being in a wheelchair, her accessibility to the Boston art scene was limited, so she started inviting other local artists to meet in her spacious home studio for lectures, musicales, and the showing of work. By 1933, they group officially became the Wellesley Society of Artists, with John Aiken of New York as its first president, a position he held through 1941.

Among their earliest members were noted stained glass designer Earl Sanborn and Agnes Abbot, who worked in both watercolor and oils. Abbot had started part-time at Wellesley College, assisting in laboratory classes at its Farnsworth Art School. Built at the bequest of Isaac Danforth Farnsworth in 1889, the Farnsworth Art School provided spaces for the exhibition of the College’s growing art collection, as well as classroom space. Abbot was promoted to professor and, later, to department chair. She had her first solo exhibit there in 1927 and went on to have 13 more exhibitions of her work, the last being a career retrospective in 1974. She died in 1992. 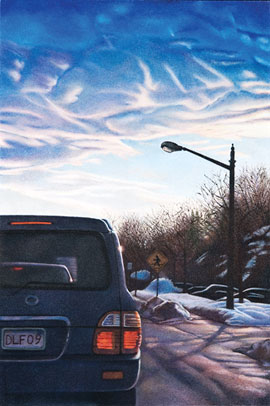 By 1960, Harold Lindergreen of Needham was at the helm and the new Wellesley Free Library had become the Society’s home for meetings and exhibits. A watercolorist and creator of silk screens in Oriental motifs, Lindergreen’s critiques, among other artist demonstrations, were held at Wellesley Junior High School and were a popular draw. Helen Sherman organized a board of directors during that time and the Society’s visibility continued to grow. Five local banks offered wall space for WSA members to have solo shows, as did Babson College for shows on a larger scale.

Noted artist Margaret Fitzwilliam, a Wellesley resident since 1951, was instrumental in keeping the Society running for many years. Her paintings of New England’s landscapes and architecture have been exhibited at the DeCordova Museum, the Boston Arts Festival, the Cleveland Museum of Art, the Federal Reserve Bank, the Boston Guild of Artists, and have been purchased by numerous private and public collections. Now WSA president emeritus, Fitzwilliam still regularly submits her work for juried shows.

Paula DeMarco of Wellesley is another of the Society’s past-presidents (2002-2006) who has remained active. She describes herself as a “mixed media” artist and has delved into the very modern medium of cable television. She is the host of Art Beat, a half-hour program on WCAC, Wellesley’s cable access station.

The Society’s fall show will open at the Wellelsey Community Center on October 4. Those interested in membership should contact Nan Rumpf at 781.237.6318 or stytelarts@aol.com.

The 75th anniversary year of the Wellesley Society of Artists culminated in the Spring Exhibit 2009 in Henderson Hall at the Wellesley Community Center. Iconic images of the Wellesley College campus, the Boston Marathon, and an easily identifiable portion of Route 16 were all on display, making for a colorful collage of daily life in Wellesley. So, too, was Sue Lingeman’s oil on panel, Here Today, Gone Tomorrow that depicts the “McMansion” phenomenon by casting the shadow of the older, smaller home within the frame of the newer, much larger one that has taken its place.

The exhibition space within Henderson Hall—made possible in part by a generous gift from long-time WSA member Helen Sherman—not only allows for work to be on display year-round, but also to host munificent openings like the one in May. Co-sponsored by the Wellesley Garden Club, the event featured Doris Gardner on the piano, refreshments, and an exquisite array of floral arrangements titled “Mini Art in Bloom.”

Joan Clipstone and Roz Augustin of the Garden Club studied the exhibit before designing the arrangements to complement the showcased work. The vibrant purple roses and fragrant lilacs in one arrangement made the colors in the art behind it “just pop,” said Yale Nicolls, current WSA president. Nicolls also remarked that a “wonderfully creative and vibrant synergy” exists between these two Wellesley-based groups.

The juror for the art show was Marla Greenfield, herself an award winning watercolorist and a former president of the New England Watercolor Society. When Greenfield went through the first time, Nicolls said she left “sticky notes” on more than half of the 40 works on display, considering them all worthy of award. Alas, she could only select eight in the end: