Making a Difference: The Gifford School 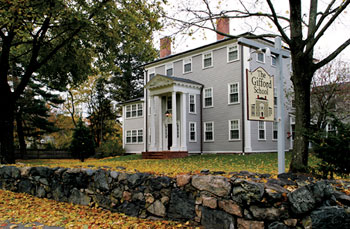 The gifford school’s main building may be one of the most recognizable in Weston. Greeting people as they enter town on the Boston Post Road from Route 128, the elegant grey Federalist, with its impressive columns and evident history, catches the eyes of all who pass. Yet few may understand, as they race from one destination to another, exactly what is being accomplished inside.

We All Make A Difference! announces a large banner hanging inside the school. Boldly designed and decorated with colorful handprints, it is clearly the students’ labor of love. And for these same children the message is significant. “One of the common denominators of kids who come here is low self-esteem,” explains Gifford’s Executive Director Michael Bassichis. “Our game plan is to have kids feel good about themselves.”

The Gifford School is a private, non-profit coeducational day school for children with special needs. Comprising a lower, middle, and high school, Gifford has 100 students from 65 different communities. Bassichis says there is no one particular profile of a Gifford student, but he describes the children as having moderate to severe special needs, encompassing a range of issues such as learning disabilities, Asperger Syndrome, social-emotional difficulties, and bipolar disorder. Despite their differences, one experience all kids at Gifford do share is they were unable to succeed in their local public schools.

“Every so often we have a population of student that requires a more intensive intervention for behavioral and social challenges,” says Beth Brown, Department Head for Elementary Special Education in Wellesley. “What Gifford provides is that very intensive, direct, explicit, all-day-long interventional program.” 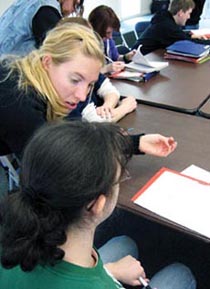 In Massachusetts last year, 17 percent of all K-12 students (a total of 166,037) received special education services. Of these, 4,627 students were placed out-of-district in a special-education-approved private day program such as Gifford’s.

Being a therapeutic school, Gifford provides a broad spectrum of trained staff members, from learning specialists to speech pathologists to psychologists, to ensure that each child is able to succeed both academically and emotionally. Classes are very small, with a three-to-one student to teacher ratio, and children are grouped by academic and emotional readiness as opposed to classic grade. At Gifford, every moment is considered a teachable one.

For parents like Jane (who prefers not to use her last name for privacy), this philosophy has made all the difference for her 14-year-old son Jacob. Once Jacob entered middle school in Needham, the size of the school and the large number of students became overwhelming. “[Needham] tried, they really did try,” Jane says. “It was just not the place for him at that time in his life. For a child with Asperger’s, adolescence is a difficult time anyway. He clearly needed to be in a therapeutic environment, because he can’t learn if he’s in tough shape emotionally.”

Jacob’s first year at Gifford was difficult according to Jane, as he adjusted to his new environment and the school got to know him. But through hard work, plenty of tough spots, and a real effort on the part of the staff to include Jacob in problem solving, the experience is now “magnificent!”

“He has this enormous sense of belonging and sense of community,” Jane says. “He absolutely feels like it’s his place and he feels that he’s accepted, he’s listened to, he’s free to verbalize his thoughts.”

It’s such feelings of acceptance and belonging that are critical for a child’s success in any school. Bassichis believes Gifford’s diverse population, ironically, enables it to be especially close-knit. 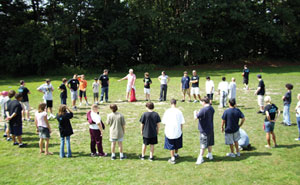 “I believe that if you have an eclectic group of kids and an eclectic group of staff, you have a better opportunity for a sense of community than one in which everyone is the same,” he explains. “A quiet kid can add more to a loud and impulsive one. Kids with Asperger’s can be on a basketball team with ones who are different. Each kid knows that every other kid is dealing with some kind of issue. The kids help each other out.”

The school was founded in Cambridge in 1964 by Margaret Gifford, a teacher and special educator. In 1971, it moved to its current 26-acre campus in Weston. The main building at 177 Boston Post Road, one of the oldest in the county, is listed on the National Historic Register. It recently underwent a complete renovation with what Bassichis says was “100 percent architectural detail. Everything was taken off and put back as it should have been.” No small undertaking, Gifford looked to its Weston neighbors for help and was not disappointed; one wrote a check for $30,000.

Such generosity exemplifies what Bassichis believes is a strong relationship with the town. Gifford sends out a newsletter to all residents, offers job opportunities to young adults, and has an annual yard sale open to the public. Long range planning for the school includes developing a volunteer program for retirees and night-time use of the classrooms for adult education courses.

Such openness with the greater community is something Bassichis has strived for during his tenure as director, saying he never wants to be secretive or withholding. Years ago, a long line of trees hid the school from the street, shrouding it in mystery. “One day, I said, ‘Enough! Let’s open up the campus and let people see in!’” Bassichis explains. “It’s a beautiful campus, and there’s no reason why people shouldn’t be proud to have a school like this in town.”

Part of letting people see in may be to acknowledge that life is not always easy at a school such as Gifford. Supporting a population of children with special needs can be challenging and not always successful. “Because it’s a whole mix of different problems there, it’s a tricky dance the staff has to do to deal with everyone’s different situations,” says Jane.

Dr. Margaret Manion, a Weston resident and long-time pediatrician, is on Gifford’s Board of Directors. She knows first hand from her practice how finding the right place for a child can be a real struggle. “I’m not an expert in any way in education or special education, but I hear daily the plight of parents and their children who may not be fitting in very well in their public school. Finding a school like Gifford can be a real salvation to people.”

For Jane and her son Jacob, this has been the case. “Gifford has certainly increased his self-esteem,” says Jane. “It has enabled him to do some school work! It has given him a peer group. He’s never had a peer group. He doesn’t fit in well in most places. It was his first experience standing around and laughing with a few kids.”

“Goodness of fit is really what makes a difference,” says Wellesley’s Beth Brown. “We always try to keep a child in the least restrictive setting, which is the public school. But in some circumstances, we have to see what other resources we can offer.”