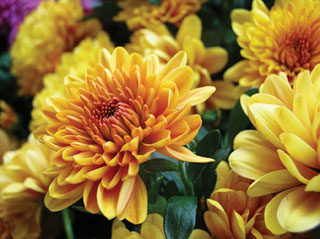 When the summer annuals start to look bedraggled and perennials lose their punch, perk up your containers and borders with the venerable chrysanthemum or “mums,” as they are endearingly called. Originating in China, mums have been in cultivation there for over three thousand years. The early mum, Chrysanthemum indicum, no longer found in the wild, was a yellow, daisy-like flower that was extensively hybridized by the Chinese. Then around the time of the collapse of the Roman Empire (406 AD), Zen Buddhist monks introduced mums to Japan, where in time it was designated the national flower and imperial emblem. Commonly known as the “rising sun,” the emblem is in fact an open 16-petaled chrysanthemum.

Trade between Europe and the Far East brought the chrysanthemum to Holland, France, and England. By the mid-19th century it was a popular florist flower in Europe and had made its way to the US, where it was considered a garden plant of minor importance. Adventurous gardeners and horticulturists everywhere continued to breed these hot house types with hardier cousins producing suitable cultivars useful for today’s gardens.

Mums are about the easiest plants to grow, requiring full sun and a moist but well-drained soil with an inch or two of mulch to help retain moisture. As the root system is quite shallow, mums need only a dose or two of fertilizer during the growing season; too much will encourage taller, lankier growth. Ammonium sulphate or a good general-purpose organic fertilizer will do. To achieve a bushy, floriferous plant, be sure to pinch back in late spring through early summer. When the plant is about six to eight inches tall, pinch or cut back by about half. A second pinching can be done if they are really growing at a great rate, but stop pinching by early August as the forming flower buds will be cut off, and all you will see is a nice green mound without bloom. Propagation is easy; divisions can be done in spring or fall and cuttings taken spring or summer.

The chrysanthemum genus has over 100 recorded species and has undergone reclassification, to the ire of nurserymen, horticulturists, and gardeners, so if you are looking it up by its botanical name you may notice that there are synonyms listed, which can be confusing. There are so many cultivars and choices that it’s best just to pick out the colors and flower forms that appeal. Mums range in height from one to three inches.

The most common fall-flowering mum is Chrysanthemum x morifolium (syn. Dendranthema x grandiflorum), which comes in just about every color except blue. The hybrid red chrysanthemum, C. x rubellum, is less well known but two cultivars are easy to source locally: ‘Clara Curtis’ has rosy pink daisy-like flowers and another, ‘Mary Stoker,’ is a lovely pale yellow blushed pink. The Montauk or Nippon Daisy, C. nipponicum (syn. Nipponanthemum nipponicum) has superb dark green foliage nicely offsetting the white flowers, and becomes a great bushy mound three to five feet tall. The little known C. pacificum (syn. Ajania pacifica), called Silver and Gold, is grown mainly for its ornamental foliage which consists of a pale green leaf edged with a silver band. It looks best and is most useful either as ground cover or planted in pots. In October, perky, button-like yellow flowers appear lending the fall garden a nice zing of color.

It has been said that mums are “the last smile of the departing year” so put a smile in your garden.

Ruth Furman is a Massachusetts Certified Horticulturist (MCH). She trained in horticulture in England and spent many happy years working and gardening there. To reach Ms. Furman, email her at: Ruth@wellesleywestonmagazine.com.