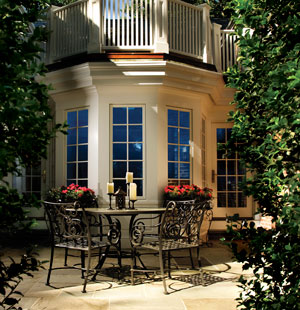 If you have ever driven through the intersection of Routes 9 and 16 in Wellesley, you’ve probably noticed the 65-foot clock tower, circa 1928, rising above the din of modern-day traffic. Next time you travel that way, take a moment to notice the surrounding Elm Park.

In fact, if you have a few minutes to spare, get out and walk around. You won’t be disappointed.

Elm Park, on the National Register of Historic Places, is co-maintained by the town’s Department of Public Works and the Hills Garden Club of Wellesley. “We help uphold Elm Park’s beauty by sending teams of our members there twice a month to weed and garden,” says Lucy Lynch, a club member. In fact, the Hills Garden Club’s maintenance of the park is the organization’s longest-running project. Their careful, loving preservation of the grounds surrounding the clock tower date back to 1955.

The funds for these activities come from a breathtaking garden tour of properties throughout Wellesley, the most recent of which was held last June. The tour, which is exhaustively planned and flawlessly executed by the Hills Garden Club, is known for being chock-full of exciting displays of cutting-edge landscaping, innovative mixes of plantings, fresh arrangements, and vivid colors. And what better properties to tour than the homes of the garden clubbers themselves?

Last year’s event was co-chaired by Lynch and Stephanie Chlan, a fellow member, and introduced five Wellesley residential gardens to the public. Unsurprisingly, the community responded enthusiastically to the chance to view top-class garden design up close. “Over 600 tickets were sold, which allows us to contribute to substantial beautification efforts at Elm Park such as wrought-iron gates, brick walkways, and benches,” Lynch says. “We’ll do even more with the proceeds from last year’s tour.” 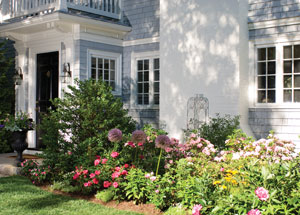 How Does Your Garden Grow?
Connie Main, an 18-year Wellesley resident and a member of the club’s board of directors, was one of the five to display her private grounds to the public. The combination of her property’s many flower beds, along with hardscapes like patios and terraces, gave visitors a thrilling one-two punch of woodland gardens and bursting blooms. In short: horticultural heaven.

Rosie Taylor Finn, a designer who oversaw the project at the Cliff Estates home, planned the gardens in three phases, which kicked off in fall 2007 with an inspection of empty beds. “Our goal was to create a focal point in each area of each garden space in layers, contrasting colors, overall form, and texture,” Finn explains. And what colors there were. From double-knockout roses and yellow lilies to multicolored verbena, andromeda, and azaleas, nothing was overlooked.

“Rosie and I had a fabulous collaboration,” Main recalls. “We were in beds together for months, getting our hands dirty, transplanting, doing everything that needed to be done.” Main says her husband didn’t realize their Gilson Road property had so many empty beds until he saw the final product. “We’re going to try to maintain what Rosie created every year,” Main says. “Since the tour, we’ve put in 500 different varieties of tulips, and we hope to improve and expand.”
When the hot and steamy tour day dawned last June, Main was outside sweeping the driveway as people began arriving. The two antique front door planters on the stoop, filled with pink and white verbena, red and black begonias, and purple-flowering royal trumpet vine promised great things to come. 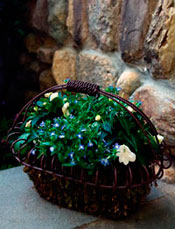 Highlights included a patio-garden water feature, a rock garden that boasted a rare solanum (a genus of annual and perennial plants) from the highlands of Ecuador, and a fern-and flower-bedecked lower patio. “I loved working with Connie—we’re a great match,” Finn confirms. Climbing hydrangea and passion flower vines, window boxes planted with Boston ferns and moss, and a cascading weeping fuzzy willow were also on view.
Similarly, sights to see on Lucy Lynch’s property included clematis, Japanese painted fern, a looming redwood tree, lady’s mantle, deutzia, beautiful peonies, and perennial geraniums. “It was really an embarrassment of riches,” she says “A valuable aspect of our club is that projects like these draw everyone together.”
During the planning and implementation phase, when teams of members got down to work on their respective assignment, there was a happy exchange of information, according to Lynch. “We really have all levels of expertise in the Hills Garden Club—some people have sophisticated knowledge, with other members learning from the more experienced ones. You really get to know people when you’re on the ground digging dirt together!” she says. “Without a doubt, it made us a stronger club this past year.”

Spring to It
All of the properties on the Garden Tour were virtually two years in the planning. In fact, as any gardener worth his or her trowel knows, planning ahead is essential. Experts say the spring season is prime time to renew, reinvigorate, and, perhaps most importantly, review.

“Homeowners should decide how they want to use their yard space, because all decisions will flow from that,” says Heather Lashbrook Jones, managing partner and landscape designer at A Blade of Grass in Wayland. “If it’s a backyard, are there children or pets to be taken into consideration? Is a big lawn desired, or will a pool be installed in the future? And of course, is space needed for entertaining, including outdoor tables and seating?”

Jones says her firm also tends to look at a client’s yard from the inside out. “We’ll consider the view from indoors looking out, and we’ll make note of what colors are in the house, because what people surround themselves with colorwise and stylewise inside can often be extended into the garden.”

That’s exactly what Taylor did at Connie Main’s home. “She trusted me to find just the right way to add little touches,” Taylor says. “So for example, I added two small stone bunnies to the wildflower garden so they can be seen from the sitting room, and I put a large frog sculpture owned by Connie in a border passageway garden so it can be seen from the patio sitting area.”

Experts say there’s one task in particular that homeowners should undertake in the fall, to make springtime garden planning much easier. “What many people tend to neglect is pruning,” says Zoe Forbes, owner of Fleuri Garden Design in Wellesley. “It’s amazing how much neater things look after pruning out the dead stuff ahead of time.”

Forbes points out that after our harsh winters, it takes a while in this northern climate for plants and flowers to spring back to life. While you wait for your roses to bloom, Forbes suggests easy, snazzy ways to update your garden, patio, and outdoor living areas.

“Containers are an instant way to add life outdoors, although they can be used at any time of year,” she says. “The best way to spruce up with annuals is in containers, and the first ones to come up are always pansies. Then, the selection hugely expands as the season goes on.”

Forbes says she tends to use containers of tulips or hyacinth, and she also depends on evergreen shrubs like boxwood or euonymus for color that might be lacking in the hit-or-miss days of March and April. “Dahlias are a favorite springtime flower too, because it’s a cutting-garden flower that you can bring indoors to enjoy, they keep regenerating and blooming all season, and, in fact, bloom all the way to fall,” adds Jones.

Meanwhile, Forbes points out that containers are also great for experimenting and maintaining color, because they can be changed as much and as many times as a homeowner likes. “In fact, containers can be used to highlight and emphasize an architectural detail of your house, such as stone,” Forbes says. “Even the architecture itself can be drawn out—use contemporary containers if you have a contemporary house, and even if you don’t, use something contemporary to change the look of your home.”

Another way to add instant color and bloom to your late spring or early summer gardens is to fill the spaces in your beds with May-blooming shrubs, perennials, and annuals. A few shrub choices recommended by Kerry Lewis of Kerry Lewis Landscape Architects are Pieris (Andromeda), Deutzia, Daphne, and Azalea. Some of Lewis’ favorite early blooming perennials are: Phlox subulata, Primula (Primrose), Geranium (Cranesbill), and Iris cristata (Crested Iris). According to Lewis, pansies are the “only reliably hardy annual for our area before the last frost which is, on average, around May 20th.”

From the way the garden tour was received last year, the future looks bright for the Hills Garden Club of Wellesley. “This is the third such event I’ve participated in, and one thing I noticed this time is that a lot of men attended,” Lynch says, “and I also noticed many people taking notes.”

So it seems that aside from their longstanding commitment to Elm Park, these true Wellesley garden aficionados have also made a tangible and lasting influence on friends and neighbors by adding beauty to Wellesley, the place they are happy to call home.