An Expanded Definition of Family 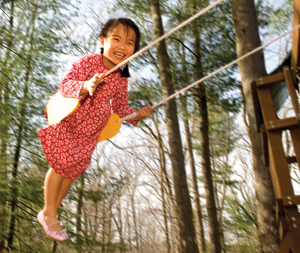 For nearly two weeks, Ann Marie and Dan Gross’ lives had been a whirlwind. In September, 2003, they left their young son Jake behind with his grandparents, boarded a plane for an 18-hour ride to China, met with government officials, flew to an agricultural region of the country, and, soon after touchdown, were handed their adopted daughter, Lilianna. Dan explains how immediately the reality came into sharp focus: “They gave her to us and we took her to our hotel room. We heard the door click behind us and we thought, ‘our lives are never going to be the same.’ ”

As more families adopt children internationally, many local residents have played out similar momentous scenarios in different hotel rooms all over the world. In fact, Americans adopt more international children than all other countries combined. Our two communities are no different. Although accurate town figures are difficult to come by, it is correct to say that there are hundreds of inter-country adoptive families in Wellesley and Weston. “Adoption is fundamentally changing our understanding of families,” says Adam Pertman, Executive Director of the Evan B. Donaldson Adoption Institute, author of Adoption Nation (Basic Books, 2000), and a leading expert on adoption issues. “It’s on par with the other big demographic changes in this country.”

Long gone are the days of unwed mothers suddenly disappearing for awhile to stay with relatives, and gone is the silence and evasion when family members ignored fundamental questions from adopted children about their histories. “People would adopt a Korean child and be told by social workers, ‘raise this child as you would any American child,’ and then everything was supposed to turn out all right,” says Pertman. Over time, this culture of denial has proved unworkable and has given way to a universal acknowledgment of the value of affirming one’s personal history, unique heritage, and culture. “People want a connection to their past,” says Ann Marie Gross about Lilianna. “We want her to be connected to her culture.”

At its heart, international adoption is a strange concoction of exceptionally stringent and burdensome bureaucracy flavored with a whole lot of faith and expectation resulting in a singular, seminal outcome: a child and a family coming together. Families typically endure months of “home study,” (an opportunity for the adoption agency to observe the adopting family), reams of paperwork, false starts, deadlines, and lots of waiting. 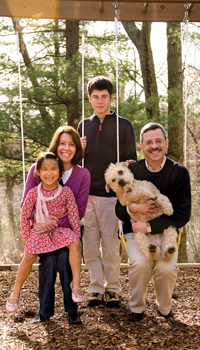 “We had to bring five years of notarized tax returns with us to China,” recalls Wellesley resident Ann Groccia about her trip to pick up her daughter, Ling. Others remember waits of up to two or more years before a placement came through. “But it’s like labor, you don’t remember the frustration of waiting, and you want to do it again,” says Groccia, who went on to adopt a son from Korea.

But, after the child is home, then what? “Adoption is a process, not an event,” says Pertman. The challenges and joys of raising internationally-adopted children in towns like Wellesley and Weston are often the same as in any other town. For instance, identity issues play an important role in the healthy development of any adopted child. How does a child reconcile the fact that they don’t look like their parents or, perhaps, their siblings?

“Identity issues are important for these kids and I was always amazed at the emphasis people would put on ‘who you look like.’ It’s just not important,” says Weston resident Janet Bain, whose son Matthew is from Colombia. Julie Morse, who was born in Ecuador and raised in Wellesley, explains it this way, “Internationally-adopted kids deal with an identity crisis, where they act like the people in their hometowns but don’t look like them. And when they travel back to their birth countries, they finally look like the local people but don’t act like them.”

Because many internationally-adopted children are children of color, it is not unusual for them or their parents to face uncomfortable misconceptions and/or overt prejudice. Janet Bain had a teacher tell her at an elementary school conference that “all children aren’t cut out for college” when talking about her son’s progress. “I thought, if this were a biological child, she never would have said that to me. I was very angry about that and still am angry about it.” And Julie Morse’s mother, Viola, recalls her daughter coming home reporting that she was followed around at a local store while none of her contemporaries experienced the same shabby treatment. “When people see someone who looks different, people make assumptions,” says Morse, “and with these assumptions, people often assign other assumptions.” Her frustration stems from the preconceived stereotypes people can attach to adopted kids. “Sometimes parents won’t tell people they are having trouble with their kid because they worry people will think ‘oh it’s because you are not a natural parent,’ ” she says. She goes on to observe that every kind of person faces challenges and it is not fair to blame the fact of their adoption on everyday setbacks.

It is not only identity identification that can trouble adoptive children, issues of abandonment and grief can haunt these children as well. Viola Morse remembers their first trip to visit her son and daughter’s birth country of Ecuador. The children were worried about being left behind. “Initially, they wanted to make sure that they were from Wellesley and that they were going back with us and that was that,” recalls Morse.

The campaign to assimilate children into the fabric of a community is a challenge that many adoptive families welcome. When Viola Morse’s children were at Hunnewell Elementary School, she was well aware that they would be a distinct minority. But as she said about their pioneering role in breaking international barriers: “If not us, then who?” Janet Bain observes, “Most people don’t have the opportunity to start experiencing diversity at home. It’s a great lesson.”

But having an inclusive mindset within a family unit often isn’t enough to spare these children insensitive comments from the outside world. Parents often endure such thoughtless questions as “how much did she cost?” or “where are his real parents?” Being on the receiving end of so much inappropriate language prompted Viola Morse to come up with curricula for all of the Wellesley Public Schools to tackle sensitivity issues as well as highlight the pitfalls of some seemingly innocuous homework assignments. “Just think of it – create a family tree. Which family are you going to put up on that tree?” says Adam Pertman. “Or, write a paragraph talking about your first days. Well, for the kid that was tied up in a Russian orphanage, is that really what you were really looking for? It drives kids crazy.” Morse’s school-wide consciousness raising curricula were very well received. “We have to give teachers a broader perspective on what these kids are coming in with, what is part of their history, what is part of the package,” she observes. 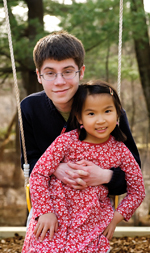 One thing is for certain: adoption redefines the definition of family. “International adoption means a new multicultural family,” says Bonnie Delongchamps. It can instantly transform a family’s worldview and perspective. “Having an internationally-adopted son makes you think more globally,” says Janet Bain. With the literal embrace of a new child, a psychic embrace of that child’s culture and heritage soon follows. “The challenge for communities like [Wellesley and Weston] is to find ways to connect adopted persons with their roots,” says Adam Pertman. “It is important to connect them with other people who look like them, with role models they can emulate and associate with.”

Many internationally-adopted children attend language classes or cultural clubs that teach about their country of origin. But because international adoptions are often closed adoptions (meaning that there is no information about birth mothers or fathers), immersion in a country’s history and culture may be as close as some children ever get to finding their roots. “Because there is no information, the way [children] define themselves comes from the history and the culture of the country they were born into,” says Delongchamps. “It needs to be incorporated in a child’s everyday life.” For example, Lilianna Gross takes Chinese language classes. Both the Groccia’s daughter, Ling, and Lilianna Gross have ties to Chinese students at Wellesley College who give the girls positive role models and general hang-out time together. The Morse family has returned to Ecuador multiple times. “It is and was a very meaningful experience for the children [who are now full grown],” says Morse. “It was an affirmation of them as people. Now there is a place in the world where they are not the minority.”

Adam Pertman reminds those who are not adopted how fundamental the need can be for answers about one’s past. “Everybody wants to know who they are and where they come from and that includes adopted people,” he says.

The sheer numbers of internationally-adopted kids in towns like Wellesley and Weston present these communities with living, breathing examples of the elastic nature of families. “Take Lilianna Gross, for example,” says Adam Pertman who is acquainted with the family. “What about the kids who go to school with her? Those classmates will have new ideas about what families look like. But it’s not only her classmates: her teachers, doctors, friends, and neighbors are all impacted.” 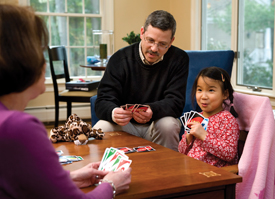 Many parents of adopted children were told by well-meaning friends and relatives about the so-called risks of adoption, but adoptive parents seem to know better than anyone that there are no guarantees. “People who give birth to children often think it will be predictable, whereas we know that it’s not—both adoption and biological avenues involve risk and uncertainty,” says Dan Gross.

Many children seem to burst forth developmentally after arriving home. “They are literally like roses growing in time lapse photography,” says Bonnie Delongchamps. Anne Groccia agrees. Her daughter, who had limited mobility at nine months when she first came home, was rolling over and sitting up within two weeks.

But it isn’t only the children who seem to blossom; families literally grow in an instant. “Matthew brings so much laughter and warmth to our house,” says Janet Bain of her son. Societal constructs of bloodlines and biology don’t ensnare most adoptive parents, either. “As far as I am concerned, they are my kids,” says Viola Morse. “I never think – could I love any biological kids more? There is no difference.”

A profound sense of destiny permeates many of these new families as well. Ann Groccia says, “This is what was meant to be. This is how we are a family. I wouldn’t change it for anything in the world.”