Face to Face with Wellesley and Weston’s Police Chiefs

An interview with Terrence Cunningham and Steven Shaw 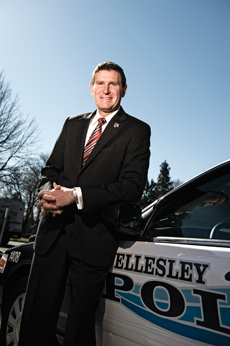 Both were born and grew up in their respective hometowns. Cunningham is the grandson of the man who founded the Wellesley Special Police in 1946, and Shaw is the son of Weston’s former police chief who served from 1958 to 1986. Both men played on their high school football teams (just missing facing each other on the field by two years), and received their degrees from the same undergraduate and graduate schools.

Together, they have a combined total of more than a half-century of service with their departments: both started their careers as volunteers while they were still students and worked their way through the ranks, becoming chiefs within four years of each other.

Recently, they sat down together with WellesleyWeston Magazine to talk about the challenges and rewards of community policing in these two towns that share so much.

WellesleyWeston: As chiefs of your lifelong hometowns, you bring similar backgrounds and strengths to your positions. Comparing the towns of your childhoods to the towns you protect today, what are the most notable changes you see?

Steven Shaw: It’s kind of sad. My grandfather, my father, and I all grew up in Weston, we’re proud of that. But it’s become so expensive that when my dad died, I couldn’t afford to buy their house and stay in town. I think we’re missing out on a lot, having lost that diversity.

Terry Cunningham: Boy Steve, you really hit the nail on the head. What’s happened in Wellesley is very similar. It’s been a huge change. When I was born here, literally 98 percent of the department’s 65 officers lived in town; I went back and checked the records. Now we have 43 officers, and only three of us can afford to live here.

WW: What challenges does that present to you and your departments?

TC: When officers were your next-door neighbors, or you’d see them on the baseball field with their kids, you got to know them by name, feel comfortable with them, and trust them. But we lose that when the guys and girls don’t live here anymore. When I became chief, there was a lot of tension between the youth and police, because they just didn’t know who these guys were. We’ve worked very hard to try to turn that around, to reconnect with the town. 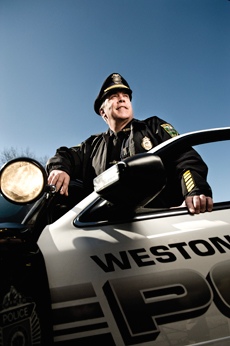 SS: We have, too. Every summer, I send a guy on a bike up and down the main streets. He goes into the banks, talks to the store managers, gets to know the shoppers, and walks through the kids’ section of the library. People want to see cops’ faces. They want to wave and get a smile of recognition back.

TC: Community policing is at the heart of what we do; isn’t it, Steve? It used to be that the only time people would see the police was at a distance driving by, or writing them a ticket. So I started park‘n’lock in the square — the officers get out, walk everywhere, just talk to people. They carry their Wellesley Police baseball cards and temporary tattoos and give them out to kids. We have a great open house during Wellesley’s Wonderful Weekend; the really popular Citizens’ Police Academy; the annual Officer Stewart Savage Memorial Road Race; and a Youth Academy in the summer. The cops love all of this, they’re proud to talk about what they do.

WW: As Chief, how do you define your department? What are your priorities, and what do you see as your town’s needs?

TC: When I interview people for a new position I say that it’s great to do all the enforcement that’s part of the job, but what’s absolutely most important is that our job is community-centered service.

SS: I do the same thing. I walk into the exam room and tell the applicants, “If all you want to do is catch bad guys, the door is right over there. We’re a service-oriented department. And no service is too small.”

TC: Sure, we do the murder or robbery investigations. But when a scared woman calls because her husband’s on a business trip and there’s a bat in the house, we go and take care of that bat with just as much courtesy and dedication and professionalism and respect as the big jobs that make the headlines.

SS: I used to be our department’s bat man. Really.

TC: If somebody calls and needs any kind of help, we’ll send someone. For the majority of people in town, this may be the only call they ever make to police, so we want to make it as positive as possible.

SS: I agree completely, Terry. Missing that opportunity is missing out. I will take any occasion to put my guys in a situation where it’s in a good light, rather than only meeting someone in a negative way.

WW: What’s the most demanding issue for your department?

TC: I attend the meetings of the Major City Chiefs, and the number one issue for everyone is traffic. Crashes, enforcement, speeding, stop signs, road rage, and congestion, all of it.

SS: That’s what I like best when chiefs meet — you hear the same thing from everybody, and say, thank God I’m not crazy.

TC: It’s by far, by far our leading issue; I think people would be stunned to hear that we do over 1,000 crashes a year, from simple fender-benders to serious accident reconstruction. That’s a lot of time. It takes days to put crashes back together. 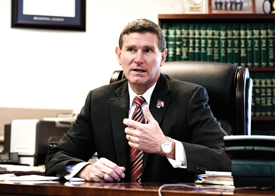 SS: It’s overwhelmingly the worst problem in Weston, too. One of the things that makes our town desirable is that it’s near all the major routes, but that means that everyone converges on us. In our small town, we have in excess of 200,000 cars per day. With Route 9 and Route 16, I bet Wellesley has ten times that number.

WW: Since your populations are so similar, you must both face the same kinds of problems with teenagers. How are you dealing with them?

TC: I constantly worry about our kids. Most are great people and will go on to be wonderful adults, but all it takes is one instance of poor judgment for their futures to unravel.

SS: Our Community Service Officer works hard with the kids. She’ll bring some pizzas, sit in the high school cafeteria at lunchtime, and grab people to just come over and talk.

TC: Having that comfortable, familiar presence in the high school is definitely important. We go there, in plainclothes, and teach the health component about drugs and alcohol. That way, we get to meet every student, and have free-flowing conversations, in small groups. They get to know us, and we get to know them.

SS: Our officers go to the schools starting in early grade school and talk to kids when they still think we’re kind of cool. Unfortunately, too often the next time we see some of them is in high school, for the wrong reasons. So we’re trying to close that gap. Since problems are starting earlier now, even in middle school, it’s more important than ever to keep that communication going.

WW: To focus in on one aspect of teen problems, how are the police involved with suicide prevention and awareness?

SS: We set up a really diverse community group called the Weston Community Health Coalition, to address concerns like binge-drinking and suicide.

TC: Suicide. It breaks my heart. We’re up to seven teen suicides in the last few years, second highest in the state. We’re working hard with schools and the faith community and town boards and parents just to get some traction.

SS: This doesn’t get the press, but suicide is a community-wide issue, not just with kids. We see it in the elderly, too. It’s probably one of the worst calls for a cop to go on. You go to a suicide, walk in, and think — how could something have gotten so bad, and no one around them saw it?

TC: When we respond, we then have to sit there and wait until the M.E. arrives. You just look at the body and think, couldn’t their community have helped? 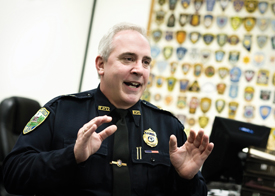 Wellesley is trying hard. At our budget meeting, the selectmen even specifically asked me if I needed more money to address suicide. Wellesley’s a rare town in that respect too, where leaders actually ask if you want more money. They really do care.

WW: What do you anticipate might be the impact of the economic crisis on crime in Wellesley and Weston?

TC: Already, bank robberies are going through the roof, an epidemic. Also, property crimes and housebreaks had gone down, but we’re starting to see them rise again.

SS: Break-ins always used to pick up around Christmastime, when people needed money. There’s always been an economic tie-in. And now that people are losing their jobs and don’t see any way out, it’s going to get a lot worse.

TC: Sadly, I’m sure that we’ll see an increase in domestic violence. People don’t believe it when I tell them how much of an issue domestic violence is in Wellesley. And it’s only going to get worse, with the stresses of the economic crisis.

SS: And crimes of impulse, crimes of opportunity.

WW: What advice would you give to your residents — what can we do to be safer, and to help the police?

TC: I know that Steve will jump in here because he sees the exact same thing that I do. These are great communities, very safe, but you simply have to lock your doors. Someone broke into my next door neighbor’s house a few months ago. I was so embarrassed — my next door neighbor! And when you catch the thief you ask him, why did you pick that house? He’ll just say that the other ones were locked.

SS: People feel safe, that’s great. But be smart, too. And watch out for each other. That’s the message I’d really like everyone to hear. In this hectic, hard world, we need to try to connect. Get to know your neighbors. Pick up their newspapers if they’re away. Check in on the elderly widow next door. Just be aware. If you hear a noise or see a car driving slowly or spot people who don’t look like they belong — call us. Too often we’ll follow up on a break-in and neighbors will say — “oh, I saw a strange truck, but I didn’t want to bother anyone.” It’s never a bother, that’s what we’re here for. We can’t be everywhere. There are way more residents than police. Be our eyes and ears. Don’t ever, ever, ever be afraid to call.

WW: What is your philosophy as Chief?

TC: Well, we’ve come full circle, back to what we talked about at the start. I want us to return to the special kind of relationship that police and residents have historically had in Wellesley — one of friendship and mutual trust. We have terrific officers, talented and dedicated and caring, and I’m proud to work with them. If the residents could just get to know them, they’d be proud, too. Wellesley is my hometown, and it’s a great town. We’re all here to try to make it safer, and make the quality of life here even better. We don’t just police the community, it’s our community, too.

SS: I’m a lucky man. Over the last nine years we’ve brought in 13 new officers, so we pretty much have a completely different department. They’ve given it fresh energy and new life. They’re such good guys. This is where I’m putting my focus and my heart. When I die, nobody’s going to hang signs saying “Steve Shaw passed by here.” But if one person says, “Hey, he did a pretty good job with that police department,” well, that’s all I’m looking for.