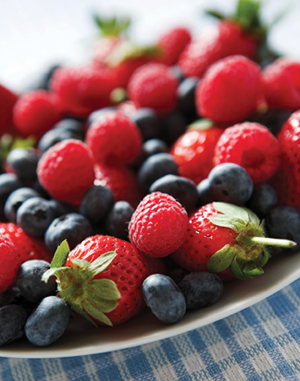 June can be an iffy month with lingering cold and rain, but the weather does turn and the signs of summer unfold: roses bloom, the swimming pool beckons, and, best of all, strawberries grow and ripen. These heralds of summer satisfy the senses: the glistening red fruit catches the eye, sweet juicy flavor saturates the taste buds, and the gentle fragrance makes them irresistible.

These first fruits of summer are a hybrid of two indigenous species: Fragaria virginiana, the meadow strawberry, which is found in open woodlands along the east coast; and F. chiloensis, the beach or sand strawberry, which hails from our west coast and South America. The result was F. x ananassa from which all our cultivated strawberries descend. One of the first cultivars produced in America in 1834 was the ‘Hovey’ by a nurseryman from nearby Cambridge named William Hovey. The nation’s first strawberry festival was held in Belmont in 1858.

Soft fruits like strawberries and other edible berrying plants (or any fruits for that matter) have similar growing needs, appreciating a sunny location protected from severe winter winds and a well-drained soil rich with organic matter. If you only have a small garden or limited available space, despair not, because containers will do nicely too.

If you do want to plant them in the ground, clear the site of weeds, particularly the perennial types, because once the runners on strawberries get entangled they are a devil to sort out. And avoid areas where potatoes, tomatoes, or eggplants and any member of the Rosaceae family were grown as they carry a soil-borne disease called verticillium wilt to which strawberries are particularly susceptible. Procure only strawberry varieties that are disease resistant and certified as virus-free stock and, although spring planting is preferred, it’s not too late now to put some in as they take about a year’s growth before producing fruit. Space plants eighteen inches apart with three feet between rows and make sure the roots are well spread out in the planting hole, as cramming them into a tight space inhibits good fruit production. Top-dress well with good organic matter and finish with straw mulch. A dose of potassium sulfate in early spring gives flavor a boost. Plants are productive for about three to five years and runners can be rooted annually to create new plants. Fruits start out green, then turn white, maturing to red; before picking, they should be mostly red with a firm, plump feel. Unlike many other fruits they will not ripen after picking.

Next on the berry “must have” list are blueberries, which not only provide fruit but are wonderful ornamental bushes. Even if you don’t like them, plant a bush just for the wildlife to enjoy. The native high bush blueberry, Vaccinium corymbosum, is a common plant of our woodlands with an upright habit rising to about six feet. Its cousin, Vaccinium angustifolium, produces smaller, intensely flavored fruit and can be found in scrubby areas in parts of Maine. Known as the low bush blueberry, it grows one to two feet high and spreads via underground stems, so its mat-like formation makes a good ground cover. There are also half high cultivar hybridized types that are suitable for containers. The high bush blueberry has been extensively bred so there are many cultivars available with a range of flavor and fruit production. All blueberries self pollinate so one bush will produce fruits; however, fruit production does increase if two different cultivars are planted. High bush blueberries should be planted approximately five feet apart and the crowns, the base of the plant where the roots and stems meet, should be no more than one-half inch below the soil. Be sure to mulch generously to about four inches. Berries start ripening in July and by planting a few different cultivars, picking will last right through to September.

Brambles conjure up thoughts of thorns and barrier plantings as they lack the ornamental attributes of other berry plants, but they do, in fact, produce the most exquisite fruits. The most commonly grown bramble is the red raspberry, Rubus idaeus. The stems, or canes, to these plants are biennial, meaning that in their second year they die back. Its roots, however, are perennial. Thus, the many cultivars are either summer bearers, fruiting on the prior season’s canes, or autumn bearers, fruiting on the current season’s canes. Traditionally raspberries are planted eighteen to twenty-four inches apart with rows about five feet apart. Mulch well and keep the soil moist during a dry season. With the right selection of cultivars your raspberry picking can last until October. This is the summer to try your trowel on growing fruits – it’s as easy as pie!