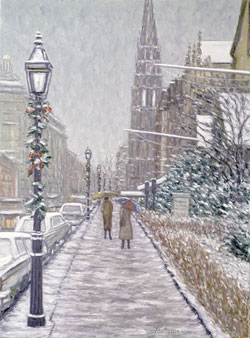 Some artists dabble in a variety of media before finding their calling; others are drawn to a wide range of subject composition. Neither was the case with Wellesley artist E. Joseph Fontaine (1929-2004) whose name is synonymous with local landmarks like Newbury Street, Boston Common, the Public Garden, the famous Make Way For Ducklings sculpture, and his most noted subjects, Boston’s beloved Swan Boats. He preferred painting these scenes, always in oil, because, as he told The Providence Journal shortly before his death, “I have to paint the kinds of pictures I enjoy looking at myself.” As it happened, many others have enjoyed looking at these kinds of pictures as well. Although Fontaine’s paintings have their roots in the works of the 19th century Impressionist painters, each piece is hallmarked by a soothing sense of joy and energy that is a timeless reflection of our tradition-rich New England culture.

In the early 1960s Fontaine, an energetic father of five, moved to Wellesley not as an artist, but as a successful young tax attorney. Encouraged by his supportive wife Rose, he managed to find time for his art after hours and on weekends before making a full-time commitment to painting once the children were older. Fontaine’s son, Wellesley resident Tom Fontaine, says that before his father was known for his painting, he was recognized as both an avid art collector and a highly skilled authenticator. According to Tom, “He had an unbelievable eye and could spot a fake just by looking at the brush strokes.” One of Joe Fontaine’s early friends and mentors was Morton C. Bradley, a neighbor when both lived in Arlington, Massachusetts. Bradley, who died in 2004, also happened to be a highly esteemed art authority, once working as the head conservator at the Fogg Art Museum in Cambridge. He also did restoration work for many museums including The Boston Museum of Fine Arts as well as for galleries and private collectors. According to Tom Fontaine, it was Bradley who continually encouraged Joe to devote more time to his art. In the late 1970s, Joe Fontaine took his friend’s advice. He left his legal practice, and in the words of his daughter and former Wellesley resident Cathy Cantwell, “He was able to make a career out of his true love—painting.” 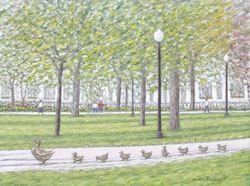 Raised in Chicopee Falls, Fontaine showed artistic promise from a young age when he meticulously embellished his parents’ basement walls with a colorful, impressionistic mural of Snow White and the Seven Dwarfs. Although Fontaine was only ten years old at the time, his daughter Carolyn, (as quoted in Fontaine’s obituary in The Boston Globe) said that the depictions were “absolutely better than the originals. It was like a magical kingdom.” An exceptional student, Fontaine was at the top of his class at Tufts University where he studied Art History and English; he later received a law degree from Harvard Law School. Eventually adding classes at the Fogg Art Museum, he focused on mastering traditional artistic styles and expressing his work through painterly techniques. He was also an avid traveler and was especially drawn to Italy where he was stationed as a naval communications officer after college. Having a great love for the European Masters, he later returned to Italy to paint Venetian canals and other Italian landscapes and to study, placing special emphasis on the plein-air painters. 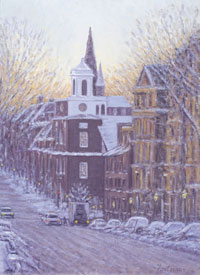 Stylistically, Fontaine began each of his paintings with a method he referred to as “boxing in.” Whether in his own garden or on the Boston Common wearing his trademark straw hat, he would sketch the outline for his paintings. Tom Fontaine speaks fondly of his father’s artistic work habits and his acute ability to focus on his art. Tom remembers that whether Joe was painting at his Wellesley studio or in South Kingston, Rhode Island, he had an unbelievable ability to concentrate. After briefly greeting visitors, he would immediately return to his work, and with opera or classical music providing the inspirational background, Fontaine “would literally march back and forth from the canvas, applying a few brush strokes and then stepping back to look at the effect.” This “painting and marching” became such a cultivated habit that areas of carpet in Fontaine’s studios were literally worn from the pacing.

A visit to any Long’s Jewelers in the Boston area will instantly remind both visitors and locals of Fontaine’s strong presence in Boston. Long’s continues to highlight Fontaine’s images on a wide variety of giftware including note cards, paperweights, jewelry boxes, and mirrors. Long’s also features signed and numbered prints as well as canvas reproductions—all of which are strategically displayed alongside other familiar Boston gifts like the Gurgling Cod Pitchers and Red Sox Mirrors. According to Jo Anne Chandler of Long’s in Natick, “ E. Joseph Fontaine has quite a following. People come from all over looking for additional pieces to complete a collection or maybe a bridal gift, or to mail a little piece of Boston to a friend or relative.” Two of the most sought after depictions are The Boston Ducklings and The Boatride which highlight the Swan Boats in the Boston Garden. 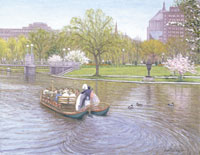 Fontaine was a prolific painter, producing over 500 paintings during a span of about 24 years. During the 1980s and 1990s he exhibited in shows in Boston and the surrounding New England area; the Crane Gallery and the Lily Pad Gallery as well as The Copley Society of Boston all highlighted Fontaine’s work. He was also a frequent first-prize winner at The Brockton Art Museum and was listed in Who’s Who in American Art as well as Art in America.

Although renowned for his landscape depictions, Fontaine’s most widely viewed image is likely “Boston from the Charles.” Cathy Cantwell relates how honored her family felt when The Boston Athletic Association chose her father to design the lithograph that became the 100th Anniversary Marathon poster and was subsequently printed on an entire line of marathon souvenirs. “It was quite a challenge for him, but he rose to the occasion and spent days perfecting the 100 runners that encircled the laurel wreath. He wanted to include what he thought were the most memorable and recognizable scenes in Boston and worked tirelessly to achieve that.” Although the original image is part of a private collection, Cantwell remembers “it was quite a spectacle on marathon day seeing all the T-shirts with my father’s painting embossed on the front.” 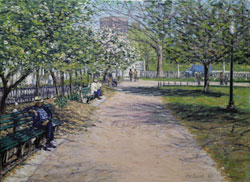 Prolific painter, astute businessman, successful lawyer. E. Joseph Fontaine had much to be proud of in his life. However, it was his role as a husband, father, and grandfather that seems to have been the driving force in his work. Cathy says that when her father was asked what made his art so serene and uplifting, his answer was always the same: “An artist’s work reflects his soul and there is a part of my soul that would have been parched and barren were it not filled with the love and pride for my family. They are in every brush stroke of every painting I have ever created.” Tom Fontaine adds that he felt his father wanted his art to be a positive force that created lifelong pleasure for others. E. Joseph Fontaine’s memory is held dear not only by his immediate family but also by the family of collectors who still admire his work. In Cathy’s words, “It is a great legacy. We are very lucky.”