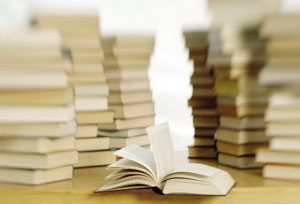 What keeps Wellesley and Weston residents up at night? Looming overrides? Overdue college applications? Bleak economic forecasts? The neighbor’s cat? Maybe. But in towns like ours, it might just be a really good book.

It comes as no surprise that Wellesley and Weston are communities filled with people who value reading. “Our library has one of the highest circulation rates for a town of this size. This is a town that values education and literacy,” says Weston Public Library Director Susan Brennan. Elise MacLennan, Assistant Director for Library Services for the Wellesley Free Library observes that “Wellesley readers are interested, curious, and informed.” In both towns, library circulation has increased over the past fiscal year and both Dragon Books of Weston and the Wellesley Booksmith are on target to surpass sales from the prior year. It is this kind of data that supports the notion that we live in towns filled with book lovers: we buy books, talk books, collect books, and, in the end, actually read books.

So what kinds of titles have found their way onto readers’ bedside tables this year? In a snapshot survey of both town libraries and bookstores, as well as talking to residents, the answer is: all kinds. “Happily, there is no ‘typical’ Wellesley reader, as our library customers range in age from zero to 99,” says MacLennan. Having the luxury of catering to an intellectual and engaged readership means that librarians and booksellers can push beyond the boundaries of best sellers into the realm of worthy but under-publicized titles.

“Strong authors are always in demand, but for booksellers the tricky part is choosing the breakout, quirky authors. All it takes is a few devoted booksellers and we can amaze publishers with the power of our persuasion,” says Wellesley Booksmith’s adult book buyer, Lorna Ruby. “Hand sell” is an industry term for a bookseller’s personalized recommendation. Some of the “hand sells” that Wellesley Booksmith (and indeed other independent bookstores) have been championing this year have been debut novels that have become best sellers chiefly through these merchants’ resolve that commendable titles don’t get delegated to the remainder shelf. The Lace Reader (Harper Collins, 2006) by Brunonia Barry is one such example. Buoyed by its local setting (Salem, Massachusetts), this title has become a runaway best seller almost totally through word of mouth. Originally self published, the book was eventually picked up by William Morrow in a two million dollar deal. The Guernsey Literary and Potato Peel Society (The Dial Press, 2008) by first-time authors Mary Ann Shaffer and Annie Barrows is another example of a book that gets pressed feverishly from hand to hand and shows up at the top of local and national bestseller lists.

But the title that has indisputably grabbed the gold crown is the publishing phenomenon, The Story of Edgar Sawtelle (Harper Collins, 2008), David Wroblewski’s debut novel. In September of this year it was the most requested title at both the Wellesley Free Library and the Weston Public Library, and among the top five best sellers at the Wellesley Booksmith and Weston’s Dragon Books. It also made the “Top Ten” best sellers list at The New York Times and The Boston Globe. It is the story of a mute boy and his relationship with his dogs and his extended dog-raising family. The review in the Times raved, “this is a great, big, mesmerizing read, audaciously envisioned as classic Americana.”

But it is not only personal recommendations from friends and booksellers that inform buying choices for book lovers. Further information comes from other outlets. “One thing I can say about our customers is that they are National Public Radio listeners. We try to stay ahead of what is covered on the shows,” says Ruby. Elise MacLennan agrees: “Many people in Wellesley learn about what is newly published through television, public radio, newspapers, and magazines.”

And in a year where politics dominates nearly every news cycle, local readers have been heading to libraries and bookstores to stay on top of it all. “There will be many political books perused [in 2008], what with the election and all, both new books and older ones,” says Patience Sandrof of Weston’s Dragon Books.

Other categories that are of interest are “going green,” spirituality, retirement, and the Second World War. By year’s end, Thomas L. Friedman’s new book, Hot, Flat, and Crowded: Why We Need a Green Revolution – And How It Can Renew America (Farrar, Straus and Giroux, 2008) is expected to draw a strong following. Other non-fiction titles include those that tackle the uncertain economy including a new one by Liar’s Poker author Michael Lewis titled Panic: The Story of Modern Financial Insanity (W.W. Norton, 2008) and travel titles by Paul Theroux and NPR correspondent Eric Weiner. In the fiction line-up, all eyes are on the new Dennis Lehane book, The Given Day (Harper Collins, 2008), which is set in Boston, and on Wally Lamb’s The Hour I First Believed (Harper Collins, 2008).

Every year, publishers try to forecast which books will catch fire and be on the minds of millions of readers. Equally challenging is how to get good books into the hands of readers in the first place. Lorna Ruby says, “we wait for that next title when we say, ‘oh my gosh, people are going to love it,’” but at the same time, she says, readers know “that good books are good books.” Though no one can predict when the next big title will appear, readers in Wellesley and Weston (and those who like to keep eyes and ears open for it) will have plenty to read in the meantime.