One Hen: Many Opportunities 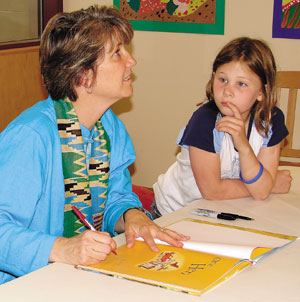 While winding her way through a maze, tackling questions about a story, locating pictorial matches, and fishing—all from her computer in Weston—ten-year-old Caitlin Reardon is actually learning about finance and participating directly in microlending to impoverished entrepreneurs around the world. Sound too good to be true? It’s not.

The Web site Onehen.org is a collaborative learning accompaniment to the recently-published children’s book One Hen—How One Small Loan Made a Big Difference (Kids Can Press, 2008), written by Wellesley author Katie Smith Milway. The partner organization that extends the real life loans, based on kids’ recommendations, is Opportunity International, one of the largest non-profit microfinance organizations in the world.
“The goal of this partnership is to cultivate compassion in kids,” explains Milway. “We accomplish this by engaging kids in fun web-based games and activities through which they can make a difference in the world.”

Here is how it works: Kids play games on the ever-expanding Web site, during which time they earn virtual “beads.” Having earned enough beads, players can then donate them to various real-life entrepreneurs who are requesting loans though Opportunity International. Once these virtual personas collect enough beads, Opportunity International grants their real-life counterparts a loan. Players can check the One Hen Web site regularly to view progress of the loan fulfillment.

Lately, Caitlin has been using her beads to support Manuel, a fisherman in Mozambique. As the Web site explains, Manuel lives with his wife and three sons and every morning at dawn he takes his net down to the ocean to catch fish for his family’s dinner. “The work is difficult and not always successful,” Manuel shares, “but when I get enough beads, I’ll be able to trade them in for a boat. A boat would allow me to travel to deeper waters, where the fish are more plentiful. After feeding my family, I can sell the extra fish.” Other entrepreneurs include Jennifer, the seamstress who is looking to purchase a sewing machine and dreams of building a larger-scale business that can employ others in her village, and Dorothy, who runs a pre-school and would like to build a multi-grade school.

“I think it’s pretty cool that by playing a computer game, I can actually help someone in Africa have a better life,” explains Caitlin.

During the first three months since its launch, about 100 loans have been triggered through OneHen.org, equating to about $11,400—not bad for a Web site that has been promoted primarily through word of mouth. “Although these $50 to $100 working-capital loans would not make a large difference in most American businesses, in developing countries, they can be life changing,” explains Wellesley resident Scott Jelinek, who has spent several summers working with Opportunity International in Asia and Africa. 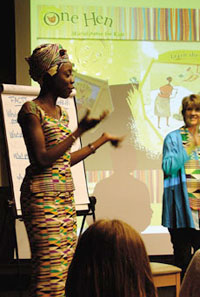 Based on a Ghanaian Entrepreneur’s Experience
The inspiration for the One Hen Web site and book is the life story of Dr. Kwabena Darko, a boy from Ghana who received a tiny loan to purchase a single hen; eventually he grew his business into a thriving poultry farm and a livelihood for many. Milway recalls:

“I based the book loosely on the story of Kwabena Darko, who rose from being a young boy who had lost his father and had to help his mother sell vegetables and fruits to make ends meet to become the largest poultry farmer in Ghana. I heard him speak at a microfinance conference in 2004 hosted by Opportunity International. His success hinged on a small donation from a missionary of a book about poultry science and some day-old chicks, and then, later, a real loan from a bank, despite the fact that he did not have any collateral.”

How Microfinance Helps
Small loans such as the one Darko received are often hailed as key to helping men and women lift themselves out of chronic poverty. “Given the weak economies and income gaps in the developing world, helping the poor find employment is nearly impossible,” explains Jelinek. “But microloans help poor people help themselves—they aren’t a handout, they are a hand up. They allow poor entrepreneurs to create or expand their own businesses, businesses that are viable in their local economies.”

By providing financial services to the poor, and training them in basic business practices, microloans help men and women entrepreneurs develop a steady income, which often allows them to provide nutritious meals and education for their children—effectively changing the course of generations. Darko’s story shows how one small loan can make a difference in a family, a community, and even a country.

The Grameen Bank, which today provides credit to over 7 million women in Bangladesh, is often credited with creating modern microfinance. Grameen and its founder, Professor Muhummad Yunus, won the 2006 Nobel Peace Prize for their efforts “to create economic and social development from below.” Opportunity International’s strategy of lending though indigenous partner organizations and trust groups—self-selected groups of 15 to 40 community members who jointly access and co-guarantee each other’s loans—is loosely modeled after Grameen. Today, Opportunity International serves over one million clients annually and has a goal of serving over 100 million people by 2015.

Why involve kids?
“Microfinance is the best window for kids into poverty alleviation because it changes people’s lives in increments that any child who has run a lemonade stand can comprehend,” explains Milway.

Kids who have mowed lawns, shoveled snow, or babysat for hire understand intuitively how a small business can generate cash. What young entrepreneurs learn through Milway’s story, however, is that a real business entails paying back your costs; in Kojo’s case [the name of Milway’s main character, her “Darko”], the loan for one hen; in the case of the lemonade stand entrepreneur, buying some replacement containers of lemonade. They also learn that what seems like small change can make a dramatic difference in the lives of children in other countries.

Beyond Games
Twenty-five Wellesley schoolchildren served as the focus group for the Web site’s games, which are developed by Cambridge-based Sapient Interactive on a pro bono basis. In addition to gaming, site visitors can listen to the One Hen story, enjoy its clever illustrations, and watch a video in which Darko tells his tale firsthand. 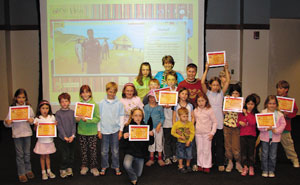 A new focus of the site is to provide resources for teachers, librarians, and parents to help demystify microfinance for children. “We are responding to the tremendous increase and awareness in microfinance in the past few years,” explains Don Ingle, Vice President of Marketing at Opportunity International. “Teachers want to teach the subject and children are excited to learn about what they can do to help poor children around the world.”

Milway has visited several first grade classes in Wellesley to read from her book and introduce the One Hen Web site as a supplement to students’ classroom studies of Ghana. Children enjoy making connections between her story and their studies, and are eager to tackle the One Hen web-based quizzes. Milway has heard from fourth grade teachers at John F. Kennedy Elementary School in Canton who are developing a full-year interdisciplinary curriculum based on One Hen and two other values-building books, Beatrice’s Goat (Simon & Schuster, July, 2004), and Three Cups of Tea: One Man’s Mission to Promote Peace…One School at a Time (Viking Penguin, March, 2006).

Wellesley’s Rotary Club is working with Milway to provide Wellesley elementary schools with copies of One Hen, and to offer mini-courses that will encourage local youth to start their own businesses. The Rotary Club hopes to provide similar resources for several Boston-based elementary school programs served by City Year, Jumpstart, and Boston Public Schools.

One Hen is Milway’s second book for children, complementing several other books and articles she has written on sustainable development. Perhaps, ultimately, there will be another story written, one of how the Wellesley-born One Hen/Opportunity International partnership introduced a whole generation of children to microfinance and gave them a vehicle to change another person’s life, or even the lives of an entire generation, for the better.