Wellesley ABC
A Better Chance For All of Us 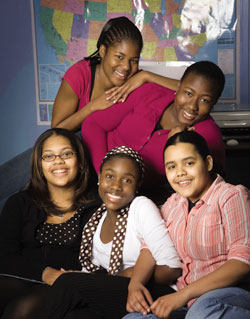 In the wake of the 2008 political campaigns and the lofty rhetoric on the crucial impact that education can have on America’s future generations, the citizens of Wellesley and the scholars of the A Better Chance (ABC) program can stand proud for having contributed to this important facet of the American dream for more than three decades.

The ABC program was created in the 1960s as an answer to President John F. Kennedy’s call for students of color to have access to America’s top schools. The Charles E. Merrill Foundation provided a grant to 23 independent schools to fulfill this mandate, which at the time was called the Independent School Talent Search Program (ISTSP). In 1964, the first 50 scholars, all young men, were accepted to college preparatory schools with the condition that they complete an eight-week preparatory course at Dartmouth College. It was also during that summer that the program was renamed ABC.

One of the earliest supporters of the ABC program was Wellesley resident Jim Barr. “Jim was part of the first ABC course at Dartmouth College,” says Mariann Youniss, one of the co-presidents of Wellesley ABC. “It was his enthusiasm and support that brought the program to Wellesley in 1972. The Wellesley ABC program owes an outstanding debt to the hard work that Jim has done across the last 36 years.”

Barr approached the Wellesley School Committee to determine if there was interest in participating. The Wellesley School Committee listened to ABC’s proposal, adopted it, and worked with Wellesley College to find a house for the program. The Wellesley College administration was very supportive and offered a house located on the campus to serve as a home for the first group of ABC students. The house, damaged by a fire, had to be completely renovated, but the Wellesley community rose to the challenge. Hard-working local volunteers banded together to rebuild the house, and by the fall of 1972, Wellesley High School welcomed its first female ABC scholars. Wellesley became a girls’ program because of its affiliation with Wellesley College and because a boys’ program had just begun in Andover.

Today, the program continues to be strong, accepting two new scholars every year for three years. Since the house can only accommodate six teens, the fourth year is skipped.

“It is an amazing program that is made possible by the talent and maturity of our scholars and the army of Wellesley volunteers that work to ensure the program’s success,” says Youniss. “One hundred percent of our scholars continue to college with graduation rates in excess of 97 percent. We watch our youth become doctors, executives, social workers and teachers. In addition, almost all of them build a professional focus on giving back to their communities in some way.”

In addition to the scholars’ hard work and the community’s support, the program’s success can also be attributed to a rigorous daily routine. 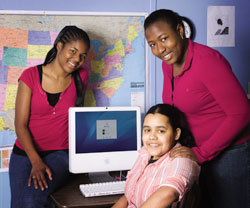 “The girls get up between 5:45 and 6:00 am in order to catch the bus at 6:40. All of our girls must be at school by first period, whether they have a first period class or not. School ends at 2:30 pm, and the majority of our scholars stay after school for sports practice, theater, dance or extra help. They then get home around 5:30, at which point they have free time until 6:00, when they help set the table for family dinner. Afterwards, from 7:00 to 9:30 there is mandatory study hall. Most of them continue to work after 9:30, but for those who finish up, it is free time again. Quiet time starts at 10:00 pm, when loud music, TV, and the like are prohibited. We ask the freshmen and sophomores to be in bed by 11:00. The juniors and seniors have an extra half hour. Of course, if they continue to have work to do, they can stay up.”

Wendy West, a senior at the Wellesley ABC program, says, “The academic demands at Wellesley High School are high. To be part of the program, we have to maintain honor roll which means we have to get all A’s and B’s. But nobody will let you fail at ABC. They are here to support you. When I started as a freshman, I was overwhelmed by the work. I had gone to a charter school in Springfield, but I was surprised by the academic demands of Wellesley. However, the ABC program has tutors from Wellesley College and the community that come every weeknight to study hall. There are separate tutors for math and English and we are all assigned an academic advisor as well. There is a lot of support.”

The support provided by the Wellesley ABC program stretches beyond the academic. They live with a house mother, Mbaira Maorongarti, who is married with two young children.

“Mbaira provides the youth with a family network,” Youniss says. “At the dinner table, the girls are able to share their day’s experiences. She has also created a dinner rotation policy for the weekends, allowing the girls to cook together. During the week, a cook makes dinner so that everyone can focus on school.”

One weekend per month, the girls spend time with their host families. Each girl is matched with a host family that lives in Wellesley. They attend all the events that the family does, providing them a true “Wellesley” experience—from soccer games to ski vacations.

“My host sister, Lilly, is like a true sister to me,” says West. “We are in the same class, which is wonderful and have a lot of similar interests. We are even applying to some of the same colleges. And my host mother, Martha, truly treats me like a daughter. I am lucky to have two mothers.”

On other weekends, there is a list of drivers that are available to take the girls to events, the mall, movies, or whatever they wish to do, allowing them the same flexibility that other youth in town have.

Jill Creevy, the other co-president of Wellesley ABC, started out as a driver for the program years ago. “The girls enrich our lives and the Wellesley school system with their diverse backgrounds,” she says. “I am thankful that my children are exposed to these girls and their views on life, as I know many other host parents are. It is amazing to watch these girls come into the program and transform across the four years. I was an academic advisor to one girl, who is now finishing up her senior year at Boston College (BC). She came to ABC from a homeless shelter in New York City, where she was commuting over one hour a day to school to finish up junior high. Luckily, a teacher at the school took an interest in her and helped her apply to the ABC program. When she first started in Wellesley, she requested a lot of academic help, but has moved forward to achieve a full scholarship to BC, and we just learned that she has been provided a full scholarship to BC’s graduate program for education. Her goal is to re-enter the New York City school system and help other youth like herself.”

Of course, the four years are not always easy. The adaptation process to life in Wellesley can be overwhelming at first.

“On the first day of school, I always pick the freshman girls up for ice cream,” says Creevy. “I ask them if there were any other minorities in their class and let them know it is okay to discuss the differences between Wellesley and their previous schools.”

“It was really hard at first,” says West. “Everyone is scared to be in high school and so they are more cliquish. So you feel more alone, because you don’t know anyone and you are trying to figure out the school and the town. But it gets better. When I joined the track team, I made a lot of friends. Like I said before, nobody lets you fail at the ABC program.”

Indeed, they don’t. The success of this non-profit program is truly a town effort. In addition to the numerous volunteers, the entire budget of $140,000 for the program also comes from the Wellesley community. Half of it is raised at an annual fundraiser and the other half comes for an annual appeal to the town.

As Creevy puts it, “I don’t mean to sound corny, but this program shows that it truly does takes a village to educate and raise youth.”