Local residents volunteer time and talent to provide for those in need.

As the holidays fast approach, many of us find that life shifts into high gear. There are family gatherings to plan, cookies and pies to be baked, presents to be bought, lists to be crossed off. But this is also a time of year that can be especially hard for those who can’t easily afford those seasonal extras, for whom there is not enough left over to make a big holiday meal. More than ever, this is a time when finding ways to provide for others will be the critical ingredient of the season. 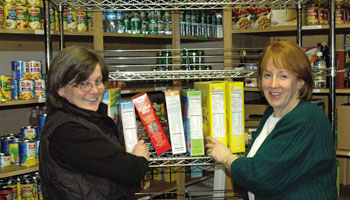 “Starting at Thanksgiving, people start to think about food and about people who don’t have food,” says Gail Lockberg, Director of the Wellesley Food Pantry. “People are more aware of that aspect of giving.”

Hunger and food insecurity – or not knowing where the next meal will come from – are significant problems across the region. According to the U.S. Bureau of Labor Statistics, the price of food and beverages at home increased 5.2 percent in the past 12 months, the greatest increase in ten years. Combine this with high gas prices, job loss, and increases in the cost of medical care and prescription drugs, and putting food on the table can become a very real struggle.

“We’re seeing a lot of people with jobs and homes, but their incomes are not stretching because they’re balancing higher fuel costs and food costs, and they just can’t make it,” says Stacy Wong, Public Relations Manager of The Greater Boston Food Bank. Wong says that for some families, needing help is just one event away. “If a spouse loses a job, or there’s an illness, that’s all it takes to put that family under stress, and they need food assistance for the first time.”

The Wellesley Food Pantry (a program of the Wellesley Friendly Aid Association) is one local organization working hard to provide supplemental food once a week to residents in need. Located in the basement of the Wellesley Hills Congregational Church, the pantry is organized and operated by local volunteers. Resembling a small convenience market, the pantry is neatly stocked with non-perishables, all donated or purchased with donated funds. Volunteers like Lockberg love what they feel is the neighborly atmosphere of the pantry: “It’s really a community,” she says. “Everybody knows when someone’s been sick or had a baby. All the food comes from Wellesley, so it’s the community helping the community.” 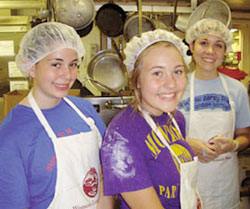 The Wellesley Food Pantry has seen a significant increase in families seeking assistance in the past three years. While the number of clients had long held steady at around 80, in recent years the number has gone up to 150. For those already under financial pressure, the holiday season can be a terrible strain. “You don’t realize how expensive it can be to have a holiday dinner,” Lockberg says. “If people are already struggling to make ends meet, that can break the budget. And that’s hard to imagine in Wellesley.”

While individual families are being squeezed by the economy, the same holds true for those organizations providing assistance. At the same time that the Wellesley Food Pantry is helping more people, individual donations are down. Also recently decreased are donations to the pantry’s food collection bin located in Roche Bros. supermarket. Lockberg hopes that as people become increasingly familiar with the supermarket’s new location, they will remember to find the bin.

Unfortunately, the strains that the Wellesley Food Pantry is experiencing are common across the state. According to a study conducted by The Greater Boston Food Bank earlier this year, almost all (96 percent) of the surveyed agencies saw demand for food rise in the past year. More than half (52 percent) have run out of food in order to meet demand in the past year. And close to two thirds (58.3 percent) faced a decrease in food donations.

Bristol Lodge is a Waltham soup kitchen that receives food, funds, and volunteers from many local groups, including Weston’s First Parish Church, Wellesley’s Village Congregational Church, and the Unitarian Universalist Society of Wellesley Hills. Dick Rogers, Director of Bristol Lodge, says in the past year they have experienced a 20 to 25 percent rise in the number of meals they serve. Rogers calls this increase “drastic” and says in the past decade, he has never seen anything like it. “I’ve gone through a lot of stuff. This is probably the worst I’ve ever seen it,” he says. “We’re seeing more people and a lot more new faces. We’re reaching a wider audience right now. More people are depending on us so that they can save that $5 for something else.”

Sally Bachman, a Wellesley resident, has volunteered for the past ten years at The Women’s Lunch Place in Boston, a daytime community for poor and homeless women and their children. She has seen, year after year, what a grueling season this can be. “The holidays are a particularly difficult time for women who are poor and homeless,” she says. “Not only are many of them alone, but for the ones who do have family connections or children, the holidays put their losses under a magnifying glass. Their losses feel more acute during the holidays.”

Bachman says The Women’s Lunch Place tries to make their lunchroom as warm and home-like as possible, with volunteers and guests integrating and engaged together. This creates a family-like atmosphere that Bachman believes is critical at this time of the year. “We do all sorts of holiday celebrations, and these really help the families cope with all the sadness that can accompany the holidays,” she says.

Volunteering has had an important impact not just on Bachman herself, but also on her entire family, which has become involved over time. “At The Women’s Lunch Place, it’s possible to connect on many different levels, so you can make it age appropriate,” she explains. “You get out of it what you put into it. The feeling that you’re really helping someone is palpable.” 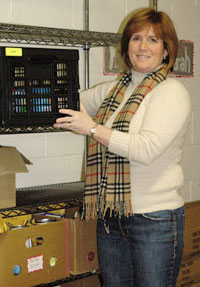 While the work of Bachman, Lockberg, Rogers, and others like them is clearly the gold standard, they each emphasize that a huge commitment is not necessary to make a real difference. “There are as many ways to get involved as there are people out there. It’s possible to do infrequent, as-time-permits volunteering. Or you can be a regular and come once a week,” Bachman explains. “Even doing little things helps the guests but also helps the volunteers. So whatever amount someone chooses to do is the right amount.”

“There are millions of ways to help,” agrees Lockberg. “In your neighborhood, if you have a block party or a progressive dinner or a caroling party, have everyone bring something.” She says that there are times when people who are baking a big batch of holiday cookies or putting together their favorite pecan pie will double the recipe and bring the extras in to the pantry. These fresh, home-made items are always a big hit. “At the holiday times, this is the sort of thing that really brightens the day of the clients,” Lockberg says. “Those small things really make a difference.”

Rogers says you don’t have to belong to a church group to help at the Bristol Lodge, and that people should feel free to contact him directly. “I see that all of those involved in trying to donate and help others feel a great sense of accomplishment. And the people who receive the help are so grateful,” he says. What’s more, he makes very clear that a donation of time or money doesn’t have to be large to be significant. “If someone gave me a dollar today, that would be the greatest gift ever. If someone gave me a thousand dollars tomorrow, that would be the best too. It’s not the amount, it’s the giving that’s important to me.”

Lockberg agrees. For her, the Wellesley Food Pantry is particularly special because when you’re there, you are helping people in your own town. “It’s like a neighbor taking food to a neighbor,” she says. “We’ve all done fundraisers, big dances, and that’s all important. But the feeling of doing something personal for someone really makes a difference. It’s the best feeling in the world.”