Maestro Out of the Heartland

If this story sounds like the opening chapters of John Steinbeck’s The Grapes of Wrath, it’s because it bears more than a passing resemblance to the epic of loss and hope experienced by millions in our grandparents’ and great-grandparents’ generations. It begins in 1941 in the back seat of an old Ford coupe, slowly wending its way out of rural Nebraska. Behind the wheel sits an itinerant musician and store clerk named Lyle Hobart, his wife, Belle, by his side. Sandwiched into the back seat between every stick of the family’s earthly possessions not tied to the roof, a little five-year-old boy gazes out at endless fields and an occasional grain elevator.

Somewhere off in the distance is a faraway place called California and the dream of defense work in the dawning days of the Second World War. The store clerk and his wife are headed for something better—a place where Max, the little boy in the back seat, can grow and thrive.

Max Hobart. If the name is a familiar one, it is in part because of what happens next in this amazing narrative, which is part fable, part personal triumph, and in every way a confirmation of the American dream.

Fate came knocking
Chapter Two begins with the prospect of a free guitar. The Hobarts did make it to California, where little Max’s dad found good work in an aircraft factory. The family settled into a place called Bell Gardens, part of Compton, outside of Los Angeles. 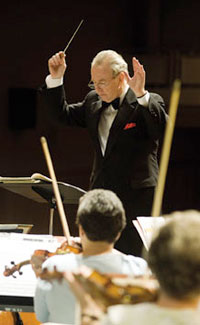 And there, one day, fate came knocking, dressed as a salesman selling music lessons in the neighborhood. One of Max’s friends signed on and got a free guitar in the offing, a deal little Max found more than compelling.

But when Max’s turn came, the guitars were all gone; all that was left was a violin. Max protested, but to no avail. His mom signed him up for lessons anyway.

And that’s where fate took over. A violin would come into Hobart’s life on a permanent basis, although later on he taught himself guitar, inspired by a musician in Harry Belafonte’s group. Eventually, he even studied privately with John Williams.

“I cried, and refused to practice the violin, but my mom insisted,” says Hobart, now the revered leader of both the Wellesley Symphony and Boston Civic Symphony orchestras, the former, a jewel in the crown of Wellesley’s musical world since 1948, the latter, Greater Boston’s second oldest symphony orchestra, in residence at Regis College in Weston since 1993.

“Like most kids, I didn’t want to practice. A year later, when we moved to Burbank, I had to give back my violin, and I cried again, but I was promised another if I agreed to take my lessons seriously,” Hobart says. He graduated rapidly from one teacher to another before landing in the Burbank Youth Orchestra at the age of 11.

To put things in perspective, Burbank is the next town over from Hollywood, so it’s not that surprising that the perky kid with the French horn a few seats over from where Max sat in the violin section was named Debbie Reynolds. She still keeps in touch.

A famous group
“There were recitals and programs and I got involved in this kind of famous group in Beverly Hills led by a fellow named David Blum. His next door neighbor was the comedian George Burns and he’d come over to hear us rehearse,” Hobart recalls.

Only a few years separated the little boy in the back seat of the dust-covered Ford from the polished violinist playing in a premier youth orchestra. Listening to him speak in his Wellesley home, his matter-of-fact tone is striking. Yet Max Hobart is the kind of person whose life has been touched by grace in more ways than one.

He’s survived two bouts of cancer, begun a loving second marriage to the violinist Pattison Story, and become a devoted parent (having earlier raised three lovely girls) to his son Alexander (also a violinist), who at nine is the light of his life.

But we’re getting ahead of our story and the time so long ago when Max’s mother Belle happened by his bedroom door one day and saw him conducting an imaginary orchestra before a mirror.

Forgotten passages
Life began to go quickly in Hobart’s college years. He went to the University of Southern California, but the allure of Hollywood studio work was overwhelming. “I was in the union and was getting paid,” he says. 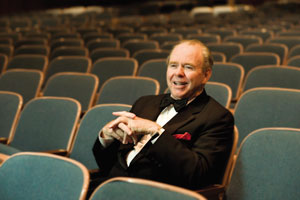 A first marriage to his high school sweetheart and the birth of a child, the first of his three daughters, followed, while “I tried to balance school and the baby and making a living,” Hobart says.

Then the phone rang one day: “Someone called from the union hall and said there were auditions being held for the New Orleans Symphony. Three months later, we left for Louisiana.”

Not much more than a decade after leaving Nebraska, Max Hobart had broken into the top ranks of American musical life.

Subsequently, in a career spanning over three decades, Hobart went from New Orleans to the National Symphony in Washington, DC to Cleveland (under George Szell) and on to the Boston Symphony Orchestra (under Eric Leinsdorf and Seiji Ozawa).

In between, he toured all over the world, including a visit to every country in South America and Europe, as well as China, Japan, and the Soviet Union. “I learned to play a lot of national anthems, which was great, but the per diem for food in those days was only two dollars,” Hobart recalls of his days touring with the Cleveland Orchestra.

But something was missing—that childhood impulse encouraged by his mother still lingered like a marginal note on a score. Casually observed and passed over, it never quite went away.

Great conductors
As he advanced from the last chair in the second violins to the third chair in the first violins and then to assistant concertmaster for the Boston Symphony and concertmaster of the Boston Pops, he played under some of the greatest conductors of the later 20th century. And to his pleasure, he realized he could study their technique and style, up close. 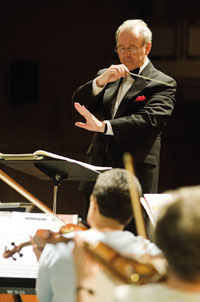 At the same time, his teaching at Boston University led to the opportunity to prepare Tanglewood student orchestras for the maestros who came from around the world to Lenox every summer.

“Among them, Leonard Bernstein was very supportive,” says Hobart.

Then fate came calling again. “We were at Tanglewood one day in 1987, and word came that John Williams was sick. ‘Will you conduct?’ management asked.

The evening went off flawlessly, nevertheless, and Hobart began the second phase of his improbable, yet illustrious career. It has included long stints in chamber groups and numerous guest-conducting appearances with the Boston Pops as well as orchestras in such far-flung places as Nova Scotia and Haiti.

Then, once again, fate stepped out of the wings. Hobart began to experience nagging pain in his left arm, which eventually was diagnosed as a nerve injury, a kind of ‘tennis elbow’ if you will. He left the BSO after 27 years.

A small universe
His growing interest in conducting, along with teaching, effectively became a second career. Eventually, he settled down with the Boston Civic Symphony, where he has had an association since 1979, and then the Wellesley Symphony Orchestra, beginning in 1993.

“Max is great,” says Gabrielle Wolohojian, an appellate judge, second violinist, and president of the Boston Civic Symphony, which will hold its ever-popular “Family Holiday Pops” at Regis College on December 20th. (The Boston Civic Symphony also performs at Jordan Hall in Boston.) “He mixes discipline with encouragement to achieve a musical caliber that we as individuals could never achieve on our own. We’re a training orchestra that’s had players go on to the BSO and many other professional orchestras,” she adds.

“Max works with people who have been around music all their lives,” says Mickey Goldin, who has devoted endless hours to photographing both orchestras. “He brings players to a higher level of achievement, mostly because he demands the hard work required to get there. He gets the very best that he can, and the players and audiences really appreciate that.”

There’s some time and distance between the road out of Nebraska in those long ago days when all he had to go on were his parents’ hopes for a better life for their son and his mom’s later insistence that he practice his violin. But the journey goes on, and to the infinite pleasure of classical music devotees from Wellesley, Weston and beyond, Max Hobart, a maestro out of the heartland, has never been in better form.

Find out more: Visit the Boston Civic Symphony at csob.org and the Wellesley Symphony Orchestra at wellesleysymphony.org.