The third in a series of articles in which we explore the people, history, and traditions that create Weston’s unique character

Many in weston remember Charles “Nelson” McNutt, Weston’s colorful centenarian, who died in 2004 at age 105. The last of four generations of farmers, Nelson was born and died within a stone’s throw of the “Four Corners,” where Glen Road intersects with Oak Street and Cliff Road. 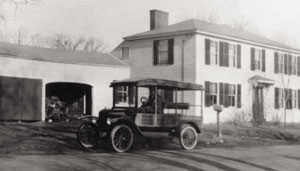 When Nelson McNutt was growing up in the early 20th century, the pastoral acres around the Four Corners were owned either by farmers or by “gentlemen farmers” who did not have to rely on agriculture for a living. The latter were generally successful Boston merchants and manufacturers drawn to Weston because of its picturesque rural atmosphere, healthful air, convenience, and low taxes. Within a half-mile of this intersection were country estates of hundreds of acres belonging to Charles Jones, Charles Dean, Garret Schenck, and Edward Peirce.

The contrast in lifestyles was characteristic of Weston at the turn of the last century. Nelson McNutt’s great-grandfather, farmer Daniel Wyman, had purchased land on three of the Four Corners in 1850. His son, George Otis Wyman, had two children: George Nelson and Mary Elizabeth, both of whom inherited the farm and shared the farmhouse still standing at 317 Glen Road. Mary Elizabeth married Charles McNutt, a teamster for the Jennings farm next door. The couple had five children: Ella, Charles “Nelson,” Edith, Florence, and Evelyn. Her brother never married. He was a quiet man who kept to himself. In appearance, he was “like all the farmers,” according to nephew Nelson, always dressed in work clothes with muddy knees from kneeling down and weeding the fields. 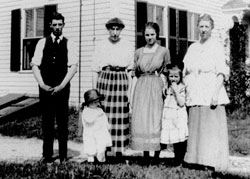 When Nelson was growing up, the sons and grandsons of farmers were still eking out a living from small family farms. Because the land had been handed down from earlier generations, farmers could manage by growing their own food and earning just enough to pay property taxes and buy a few necessities. If more cash was needed, some of the land could be sold to neighboring estate owners, who often had their eye on particular parcels. Nelson’s uncle George had a few apple trees, raised beans, potatoes, and other crops for family use, and kept a few cows. His cash crop was strawberries, picked by neighborhood children and delivered to customers who bought from him year after year.

The adjacent farm of over 100 acres was owned by the Jennings family beginning with its purchase by Levi Jennings in 1826. Levi’s grandson Edward decided to go into the dairy business. Because milk had to be delivered fresh, local farmers had an advantage. In buying out his siblings and building up Glen Farm, Edward took out mortgages and loans; and as a result, he struggled most of his life with debt. He started out in 1880 with 12 cows and owned 112 by 1903, at the height of his operation. He used about 75 acres to grow “green fodder” or cattle corn, which was cut up by machine into small pieces and stored in two large silos. To take care of the cows and fields and also handle milk processing and delivery, Edward Jennings employed about 20 men. His trucks delivered primarily in Newton and Wellesley. 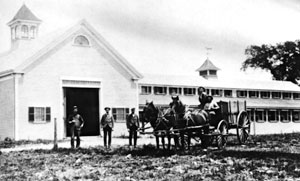 In August 1900, a large fire destroyed one of the Jennings barns. Its replacement was equipped with apparatus to fill a larger number of bottles simultaneously, as well as a separator, refrigerator, and other appliances of modern dairying. Three years later, the modern barn was also completely destroyed by fire, and some months later, Jennings sold most of his stock. He continued dairy farming on a small scale and later built up a chicken and egg business.

Edward’s older brother, Willard Jennings, inherited part of the family farm and used the land to raise vegetables and fancy raspberries for the Boston market. “Market gardening,” the sale of perishable fruits and vegetables, was the second agricultural specialty where Weston farmers could best compete. But Willard also saw another opportunity in the increasing popularity of Weston as a place where city dwellers could go to escape the summer heat. Farmers could earn extra money opening their homes to guests. About 1875, Willard built a stylish Mansard house and began taking in summer boarders. 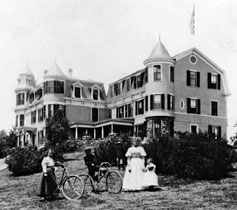 By the early 1900s, his Glen House had grown to a 40-room hotel. Five small guest cottages were added, probably in the 1910s. The success was due partly to convenient rail transportation from the Wellesley Farms station. About 1902, the Boston and Albany Railroad printed a brochure called “Summer Homes,” listing vacation spots along the B & A route. The goal was to promote ridership by encouraging regular getaways from the city to country destinations like Glen House and Glen Farm, both listed under the heading “Wellesley Farms.” The brochure describes Glen Farms as “probably one of the most beautiful country spots in Massachusetts,” with naturally cool, healthful air.

Willard maintained beautiful flowerbeds and his wife did the cooking. Families returned year after year with their chauffeurs and personal maids. Children could play on the farm while the men took the train into Boston to work. Glen House operated into the 1920s. In February 1931, a serious fire did $10,000 in damage to the house, after which the large hotel wing was removed along with the third floor of the original house. The remodeled residence remains at 245 Glen Road. Nearby are several of the small guest cottages, converted to year-round use.

About the time that Edward Jennings was downsizing his dairy, another Glen Road resident was developing one of the town’s largest and most sophisticated dairy operations. Charles H. Jones was the most serious of Weston’s gentlemen farmers. Jones was one of a generation of self-made men who made fortunes in manufacturing in the post-Civil War years. He had begun work in the shoe industry in his mid-teens and started his own manufacturing business at age 26. His company, Commonwealth Shoe and Leather, developed the Bostonian shoe, a brand name still associated with quality and comfort. In 1901, he began purchasing poor, largely abandoned farms along upper Glen Road near Wellesley Street. His Filmore Farm eventually included 270 acres, the fourth largest in Weston. 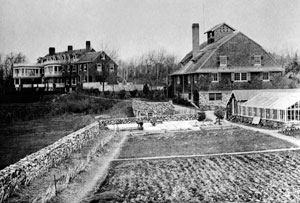 In 1903, Jones built his first dairy barn, a monumental five-story structure. Cows were milked here and the milk kept cool in a soapstone sink using ice from an icehouse. About ten years later, Jones built a second large barn known as the “testing barn,” located on the south side of Woodchester Drive near the corner of Ledgewood Road. His purebred Guernsey cows were stabled here so that their daily milk output could be weighed and recorded. Local residents recall that the testing barn had shiny stainless-steel pipes and pasteurizing and bottling equipment, all kept scrupulously scrubbed and scoured. Jones was a member and one-time president of a Guernsey cattle breeders association. His bulls were world-champion animals that sold for as much as $2,000. Jones held occasional cattle auctions under a tent across from the testing barn.

After Jones died in 1933, a resident manager operated the dairy farm. Later, the two dairy barns were rented to outside operators including Wellesley Farms Dairy, which pasteurized and bottled milk produced on the estate or brought in by truck. In 1945, the mansion was sold to a couple who removed a reported 13 rooms on the second floor to make the house easier to manage. The Jones estate land was developed beginning in the early 1950s by the Nutting brothers from Newton. The first of the Nutting houses, a one-story ranch typical of the early 1950s, was built at the intersection of Ledgewood and Shady Hill Roads. More than a dozen buildings still remain from the Charles Jones estate, including the main house and carriage house at 458 Glen Road, as well as staff cottages, and one of the last remaining ice houses in Weston. 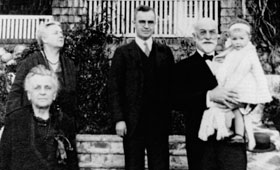 Another Boston manufacturer and gentleman farmer lived just north of Glen Road on what is now Byron Road. Charles Dean began his career as a salesman and rose to the presidency of the Hollingsworth & Whitney paper manufacturing company. His 117-acre Oak Ridge estate, also developed at the turn of the century, included a Colonial Revival mansion, large barn, combined caretaker house and secondary barn, and coach house complete with mahogany stalls marked by engraved brass name plates for the driving horses. Tucked away in the woods was a Japanese garden. The estate produced most of its own food. Cows supplied fresh milk, and in winter butter was shipped by train to the Deans in Florida.

Byron Road is named for the second owners, Walter and Helen Byron. After the Second World War, Thomas Diab subdivided the remaining estate land. Buyers purchased lots for $2,000 to $2,500 and built small one-story ranches. Stone posts still stand at the front and rear entrances into the Dean estate, while century-old rhododendrons mark the site of Dean’s mansion. The caretaker’s house and barn, coach house, and a 1917 fieldstone garage, all converted to residences, remain at 14, 60, and 50 Byron Road respectively. 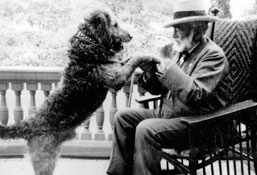 Two other large estates were located near the Four Corners. In 1898, Garret Schenck, founder and president of Great Northern Paper Company, bought 124 acres adjacent to the Dean property. His three-story stucco neoclassical mansion, since demolished, was located on what is now Bittersweet Lane. The Edward R. Peirce estate occupied the land at the southwest corner of Glen Road and Oak Street /Cliff Road. This estate, which straddled the Weston-Wellesley town line, was one of the largest in the area, encompassing almost 325 acres in the two towns. The Tudor mansion known as Henderson House at 99 Westcliff Road replaced an earlier mansion destroyed by fire in 1925. Now carefully preserved by Northeastern University, it was the last of the grand estate houses and remains a symbol of the estate era in Weston.

Although estate owners and farmers lived side by side, there was a clear dichotomy between the well-educated, well-to-do estate owners and the locals, who did not have the same money or education. Inevitably there were clashes between the realities of farm life and the idyllic rural atmosphere that estate owners were seeking. Fred Campbell, who still lives on Glen Road, is the grandson of Charles Dean’s estate manager. He tells the story of how his father was driving Charles Dean home from the train station and they saw neighboring farmer Edward Jennings walking along the road in his overalls. Dean had his chauffeur stop to pick up Jennings, who had been spreading manure on his fields. When Dean commented on the smell, Jennings replied, “Well, Mr. Dean, people who like the country have to like the country smells.”