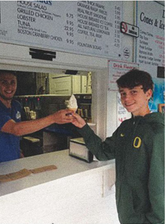 When he was three years-old, Michael Rosenbloom had a severe anaphylactic reaction to milk. His babysitter had accidentally given him a sippy cup with cow, not soy, milk. Fortunately, Michael’s parents were nearby and quickly administered one of the many Epipens stored around their home to their son’s outer thigh and called 911. By the time the ambulance arrived, Michael’s breathing had vastly improved. Even so, he was taken to the hospital by ambulance to make sure he was okay.

People with serious food allergies like Michael often live on the precipice of disaster. … But in Lexington, many parents of children with life-threatening food allergies have found hope and relief with a novel approach.

Learn more in the Digital Edition of the Spring 2019 Issue of WellesleyWeston Magazine.