Laurie Gorelick, the principal designer of Laurie Gorelick Interiors, a full-service interior design studio for residential and commercial spaces, is thrilled to announce her participation in the upcoming Junior League of Boston’s 2017 Designer Show House, which will be open from Saturday, October 7th through Sunday, November 5th. Ms. Gorelick joins 20 other designers donating their time and materials to demonstrate their talents while still maintaining the property’s original character.

The Show House is a charitable event in which designers redecorate individual rooms in historic properties to benefit community programs. Laurie will be doing the home’s study, which she will be transforming into a modern interpretation of a gender-neutral workspace with a color palette that is far from neutral. With high-gloss green wainscoting and two-tone graphic wallpaper, Laurie seeks to create a space that departs classical interpretations and establishes a colorful, rhythmic and global backdrop.

The Junior League of Boston’s 2017 Designer Show House will take place at the 1853 William Flagg Homer House in Belmont MA, just steps away from picturesque downtown Belmont. The house is currently owned and preserved by the Belmont Woman’s Club, and was previously owned by William Flagg Homer and his wife Adeline Wellington, uncle and aunt of American landscape painter, Winslow Homer.

All proceeds from the 2017 Designer Show House will go exclusively to fund the Junior League of Boston’s charitable mission. The Junior League of Boston, Inc. is an organization of women committed to promoting voluntarism, developing the potential of women, and improving communities through effective action and leadership of trained volunteers. Its purpose is exclusively educational and charitable. For more information, please visit www.JLBoston.org. 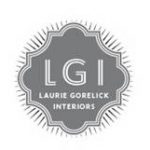 Laurie Gorelick Interiors is an award-winning, full-service interior design studio providing design services to a client base ranging across the country. Established in 2000, Ms. Gorelick has amassed more than 15 years of experience and is an accredited professional in Leadership in Environmental and Energy Design. Her work has been featured in a number of publications, including The Boston Globe, The Boston Herald, and Yankee Magazine.