If you’re like me, you may have a lingering memory of the 1950s and days when the galleries at Boston’s Museum of Fine Arts saw only an occasional visitor. Yet the MFA, as it is 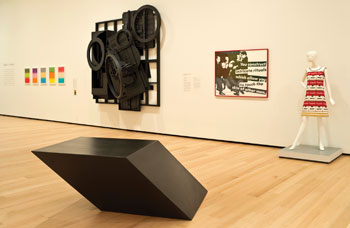 widely known, is a treasure house of classicism and impressionism, with additional holdings of Asian and Middle Eastern art and artifacts.

But if the MFA was a well known, if little-visited destination, the Institute of Contemporary Art, which dates from the late 1930s, was almost furtive in its presence on the local museum scene. Boston was slow to adjust to the phenomenon of modern art, which made life tough for the ICA. Bouncing around the Back Bay for the better part of 50 years, it is only in the last decade that the museum has settled comfortably in its sleek, new waterfront location near Fort Point Channel.

Back at the MFA, momentum began to build with the arrival of Malcolm Rogers in the mid-1990s. Now, the museum has completed a transformation this year with its new Art of The Americas and Linde Family wings. But the MFA, its role of “mother ship” in the Greater Boston art community noted, is only one among an ever-growing roster of museums in the region, many of which have achieved an iconic reputation on their own.

Within Wellesley, for instance, the Davis Museum and Cultural Center at Wellesley College has achieved world-class status with an eclectic collection ranging from the Dutch Masters to French Impressionism and American modern art.

Dabney Hailey, until recently curator of painting, sculpture, and photography at the Davis and now director of academic programs at the Rose Art Museum in Waltham, speaks with admiration of the Davis’s collection: “It has tremendous breadth,” she says, “and has something for everyone. Its great strength lies in its works on paper and the breadth of its holdings across history.”

In her new position at Brandeis University’s Rose Museum, Hailey’s challenge is to connect what has been called New England’s most important collection of modern art with the university’s student body. But the Rose, like the Davis and the art museums at Harvard University, is also a public institution. Should you be interested, a quick turn down River Road Extension from Weston into Waltham will bring you to the Rose’s front door in five minutes flat. 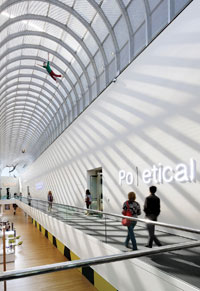 What you will find there almost defies description, especially because as recently as two years ago Brandeis had plans to liquidate much of the Rose’s collection as a means to make up for the university’s budgetary shortfalls. After a period of considerable contention, the Rose emerged intact and enhanced, with its formidable collection on display in newly refurbished galleries.

On a recent visit, assistant curator Roy Dawes showed me the museum’s storage vault, where works by modern greats like Roy Lichtenstein, Ellsworth Kelly (whose wood sculptures are now on display at the MFA), and Robert Rauschenberg hung in the dark, hidden from eager eyes.

Now, against brilliantly lit white walls, these greats of the modern era have been merged with the works of Juan Gris, Jasper Johns, and Kiki Smith – and scores of other greats from the modern movement – in a reborn Rose. But the museum holds more than the art of the 20th century, for like the DeCordova Museum in Lincoln, some of its holdings represent the work of contemporary artists.

It’s a drive of no more than a half hour from Weston to the DeCordova 35-acre campus and sculpture park, which is a lovely place to picnic and let your kids romp with the dog. For further diversion, take pictures of your family backstopped by the collection of monumental art scattered about the grounds.

For decades the DeCordova championed the best of New England’s modernists, but now it actively promotes the pleasures of its outdoor exhibition area, which has taken a unique turn with the addition of winter snowshoe tours for museum visitors.

With flowering trees and shrubs embellishing its outdoor sculpture collection in the coming spring, however, the DeCordova will reorient itself with its 2012 Biennial Exhibition. Featuring the works of 23 artists from around the region, the DeCordova will be returning to its roots.

“We’re focused on accessibility,” says museum spokesperson Susie Stockwell. “We want our art to be great and even challenging, but to speak to everyone who comes to us, 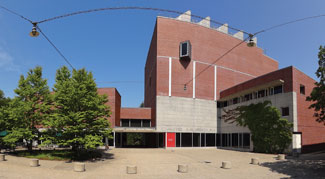 including children as well as adults.” At the same time, she adds, “our focus is very much on today.”

In that regard, the DeCordova, like the MFA and ICA, reflects a trend that is very much on the mind of the region’s curator’s, collectors, and even homeowners with an eye to redecorating.

“Within the last ten years I have seen a tremendous demand for contemporary art,” says Renata Rosenfield, proprietor of Renjeau Gallery, just west of the Wellesley border on Route 9 in Natick. “There is a move toward abstract art,” she adds, “instead of the landscapes and still life paintings which made up so much of the market in years past.”

Judy Labins of Shafer O’Neil Interior Design in Wellesley confirms this notion. “Contemporary art has a certain energy that happens when it is introduced into settings with traditional or transitional home furnishings. Opposites tend to attract,” she adds, “creating a kind of dramatic tension that can lend excitement and unique complexity to a room. When you see something you don’t expect, it makes you pay attention. That kind of layering makes for more intelligent design.”

“We’ve gone back to the ‘60s,” adds Julie Mussafer, whose popular gallery, Jules Place, in Boston’s South End has long been patronized by residents from Wellesley and Weston. “It’s odd, but the flat screen TV has helped redefine the art and furnishings of home interiors. Now, it’s all about clean lines, minimal living, and a fresh, individual look with an open floor plan and a contemporary feel. The art on my gallery walls reflects that sensibility.”

While the art we choose for our homes plays a decorative role, it’s worth remembering that it is first made for contemplation – and in that sense the way we think about the world and relate to it through our own taste and values is enriched and made stronger. 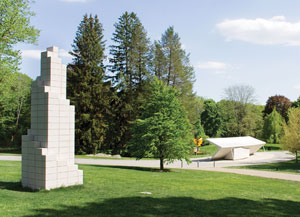 Throughout Greater Boston, roughly $1 billion is now or has recently been invested in new museum facilities, a figure exclusive of the vast trove of art – perhaps as many as two million pieces – available for display across New England, with many coming into public view for the very first time due to newly-expanded facilities.

In a region that every day goes head-to-head with scores of urban centers across the globe in the competition for money, brains, and talent, the quality of life represented by our cultural institutions is a significant factor in our success. They epitomize the artfulness of our communities while informing the grace and sensibility with which we live our own lives.

Throughout Greater Boston, from Wellesley to nearby Waltham and Lincoln and all over the region, new museums, galleries, and shows are opening and the world of art is in a state of flux. Museums everywhere are asking new questions and answering them with new plans, facilities, and exhibitions – in many instances with sensational, even awe-inspiring results.

“There is an explosion in museum building,” says Helen Molesworth, chief curator of the Institute of Contemporary Art, “in part to accommodate developments in contemporary art and for a variety of other reasons, including new forms that require enlarged spaces.”

We look to cities like New York, Paris, London, and Madrid as great centers of culture, and while the Met, Louvre, Pompidou, Tate, and Prado encompass fine art on a scale far beyond the capacity of any of our institutions, recent initiatives undertaken in the Greater Boston museum community are moving us toward a whole new level of engagement. 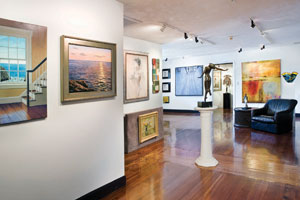 It may not yet quite be time to launch the equivalent of Art Basel Miami at Elm Bank in Wellesley and the great annual auctions held in London and New York may be far beyond our reach, but the museums of Greater Boston have certainly emerged collectively with a heightened level of public engagement and in possession of a world-class reputation.

At the corner of Quincy Street and Broadway in Cambridge, just beside Harvard Yard, chaos reigns. Like some monstrous dragon rearing up out of the earth, a huge red crane swings across a chasm crisscrossed by bulging, rust-covered pipes. Fifty feet below ground level in a vast, open foundation construction workers guide cement-spewing nozzles over a field of rebar.

The deafening hiss of sandblasters overlays the scene; the antique façade of the old Fogg Museum, skirting one side of a vast, open pit, is cloaked in a privacy screen of white plastic sheeting, the better to protect the environment from cleaning and restoration work.

Turning my back on this frenetic scene, which in a year or two will result in a fabulous new museum facility, I dodge the traffic on Broadway and cross the street to the Sackler Museum. Until 2013 it will serve as a temporary teaching gallery for Harvard’s combined collections. Harvard, ever mindful of its place in the larger community, allows ready access to its museums, a policy that enables me to slip into an otherwise non-descript gallery on the Sackler’s first floor.

While the room to which I gain entry is without distinction, its contents are altogether another matter. As I stroll along I am overtaken by a growing sense of astonishment. In a presentation probably defined by a professor of art history (and a most discriminating one at that) I find myself in the presence of a canonical collection of modernism.

In its scope and completeness, it stands as a monument to Harvard’s patrons and an academic tradition of the first rank. Allow me please, to share the attribution notes I jotted hastily (in pencil, please, no pens allowed in the gallery) as I strolled. Perhaps we should set this libretto to music!

I next encounter works by Gustav Klimt, Hans Arp, and Marsden Hartly. Along another wall are hung paintings by Max Ernst, Emil Nolde, Paul Klee, and Cezanne, followed immediately thereafter by Picasso and Braque. In stabile, stone, and metal sculpture; in portrait and landscape I gloss much of what constitutes the modern epoch in a transit of but ten minutes!

There, with the clatter and clutter of new museum construction occurring just across the street, Greater Boston’s artistic spirit has been consolidated into one, modest gallery. Across the Charles at the MFA, the new Linde Family Wing galleries resonate with a different sensibility, if no less vibrant.

Whether you find your artistic sensibilities fulfilled close to home in Wellesley or Weston, or somewhat further afield, the universe of art around us is a resource overflowing with beauty and vibrant energy.

In a way, it is miraculous. And to those who have made it all possible, the artists, patrons, museum staffs, our neighbors, colleagues, and those who have come here to be educated and moved on, we can only express our most profound thanks.

Is contemporary, modern, or more traditional art something you might want to consider for yourself? Schooling your collector’s eye at even more regional museums might be well worth considering.

Peter Golden views the American experience through the lens of local history and culture.