An Interview with Jack Williams

If we’re lucky, during our lifetime, someone might recognize us. We might get a distinction for our work. Maybe a handshake, a pat on the back and a small plaque for a job well 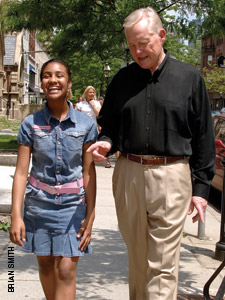 done will follow. Jack Williams sits in an office with more than 100 of these recognitions on the wall—a space completely covered with frames, photos, honors and impressive gold seals. From honorary degrees to awards of high esteem from the White House, he has lived several lifetimes of recognitions. Every single one well-deserved.

To read the long list of those who recognize Williams and his important work is tiring, and his time spent on these selfless expressions probably more so. But it’s certain that people have noticed his strong commitment to life, learning, living, and giving.

Williams has twice been a guest at the White House for presidential appreciation (a Presidential Citation from President Ronald Reagan in June 1986 in the Rose Garden; and the first Adoption 2002 Excellence Award from President Bill Clinton and the First Lady in 1997). He has been awarded four Emmy Awards for reporting excellence, seven honorary doctorate degrees from schools throughout New England, and hundreds of smiles from passersby who respect and admire him for his accomplishments.

The year 2005 brings a 30-year anniversary for Williams and CBS-4—three decades of bringing the news to local viewers. After a long career of nighttime reporting, today Williams finds himself behind the afternoon anchor news desk weekdays at noon and from 4 to 5 p.m.

But beyond the news and charities, this special Weston neighbor takes time out for himself, with a round of golf, a little yard work, some classical music and a nice night at home with his wife of 32 years—someone he affectionately calls “a wonderful gal.”

Wellesley Weston: You were off to an early start in radio, when you were just 13 back in Idaho.
Jack Williams: A friend helped me build one in my basement. My mother was bed-ridden at the time, so we did a direct wire upstairs and put the speaker by her bed. I would read her the Idaho State Journal and play my sister’s old 78’s.

WW: How did it become a profession?
JW: My buddy and I started hanging around a radio station and they gave us jobs. I was 15. It was the first rock and roll show in Idaho. I was a disk jockey after school. Then during my senior year in school I went to another radio station and did the morning show. I left home at 17 and went to various stations, and then I realized that I had to get myself a college education, so I went to Eugene and graduated from the University of Oregon.

WW: What was your transition from radio into TV?
JW: When I was in college, I was named Broadcast Student of the Year by the National Association of Broadcasters, even though broadcasting wasn’t my major. They flew me to the NAB Convention in Chicago. Every owner of every TV station in America and every station manager was there. I had 35 job offers that day. So when I graduated, I picked Seattle and went to work there.

WW: You joined CBS-4 30 years ago. You’ve found a real home here.
JW: I love it. We really like New England. We like where we live, we like the people. It’s a great part of the world. It’s a part of the world where the news is still taken seriously. 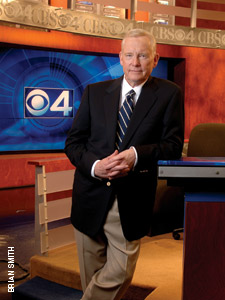 WW: Besides doing the news, you also champion special needs children. How did you start “Wednesday’s Child?”
JW: It was a way to say thank you, to give back to the community. At one time, like all stations, they were thinking about replacing talent. The rumor went out and tens of thousands of people responded, with phone calls and letters. They had never seen anything like it. I told my wife Marci, this is a wonderful place and we should really give something back. So we came up with a plan to use television.

WW: Why this particular group?
JW: Until I looked into it, I didn’t realize that there were thousands of special needs kids just waiting for adoption. It was not easy to convince the State to let us do [“Wednesday’s Child”]. No one had ever done this before. Social workers were very skeptical. They were afraid that we would exploit the kids. I told them I would write it and produce it, so if they didn’t like it they could yell at me. They could pick the child and the family, since I’m not a social worker.

What really got it going was the Assistant Secretary of Health and Human Services Doris Hardy under Ronald Reagan. She visited Boston a year after we started, and was very excited about what we were doing. She asked if we would mind if she shared it with the country. They put out a brochure on what we were doing to every television station in the country. Then it became big. At one time there were as many as 100 different “Wednesday’s Child” programs [throughout the country]. Of course I have no control over those; I just shared the idea.

WW: One well-known fundraiser for “Wednesday’s Child” is the annual Ski Race.
JW: I’ve been an avid skier my whole life. I was even a national ski patrolman at one time. Being raised in Idaho, I grew up on some pretty good mountains. The first race was 22 years ago, and it just keeps growing. Dave Thomas [of Wendy’s] heard about “Wednesday’s Child” and told me that he wanted to be involved in the fundraising. That was about 12 or 13 years ago. We still give away the Dave Thomas award as a legacy to Dave every year. He was a good friend.

WW: How has “Wednesday’s Child” grown?
JW: Five years ago, my wife and I created our own charity called the Jack Williams Endowment for “Wednesday’s Child.” We run the charity out of our home and we don’t have any employees. Primarily we have our money go towards either programs that help kids in transition get into adoption or services after they are adopted. We give away a quarter of a million dollars a year to various charities through the Endowment. Recipients of grants include MARE (Mass. Adoption Resource Exchange), St. Ann’s Home in Methuen, Italian Home in Jamaica Plain and the Walker School in Needham.

WW: What are some of the challenges you find with aligning yourself so closely with a cause?
JW: It takes an awful lot of time. Because I put my name on it, I want to make sure it’s on the up and up. So that’s a big challenge. And we also haven’t been able to just say enough’s enough.

WW: It’s hard to let something like that go.
JW: I get angry if I see a child get hurt. So far, no one else has ever stepped in, which is surprising. They are like a forgotten entity in our society—special needs kids, kids who are wards of the state, a lot of them abused, battered, neglected. It’s society’s dirty little secret, but we’ve exposed a lot of that. It’s better today.

WW: You are also heavily involved with Phi Beta Kappa?
JW: This is a part of my activities that most people don’t know about. I graduated Phi Beta Kappa from college, and in 1996, they contacted me to be a Phi Beta Kappa Fellow. There are 100,000+ Phi Beta Kappa grads, but only 300 Fellows. These are people who have taken the ideals of Phi Beta Kappa, which is the love of learning, and applied them in their lives. I was selected to the board; now I’m an officer on the board and was recently appointed to the Council Nominating Committee, along with a few well-known academics and Pulitzer Prize winner David Levering Lewis.

WW: What is your passion about learning? 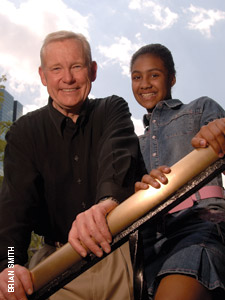 JW: I’m quite fearful that too many young people are ignoring news. They aren’t reading newspapers or watching television news like they used to. I think it’s very much a danger to our country. Many of them think you can go on the Internet and get a couple of headlines, but that’s not going to work. If I find it important enough to read five newspapers a day, plus the New Yorker and American Scholar, then how important is it for a young person?

Another problem is that too many people today going to college just want specific skills. But everything is changing so fast that the only hope they have is to learn how to learn and have a broad-based background. Learning is a life-long experience. You have to learn how to learn. That’s why I’m very active in the push for liberal arts education.

WW: What is the job you would love to do besides television?
JW: Historian. I love history. I would love to be the next David McCullough.

WW: You have returned to your love of radio a few times.
JW: I’ve been a guest twice on the Mike Barnicle show. I did a lot of radio before David Brudnoy died. I did over 100 of his shows to help him during his illness. And I did a lot in the last year of David’s life, when he was quite ill.

WW: Have things changed for you now that you are an afternoon anchor?
JW: I worked nights for 33 years. Now I do the news in the early afternoon, and it’s wonderful to go home. Marci and I can actually sit down, spend some time together, have a glass of wine. It’s something I never had.

WW: How have you accommodated all of this fame into your life?
JW: We like to keep our private life private. I’m always polite to people, but if I don’t want to be recognized, I dress out of character—khakis and a baseball hat. Unless I talk, people don’t pay attention. But people are nice to us. It’s not like I’m a real celebrity. I’m more of a neighbor. It’s not like people see me and say, “Oh golly.” It’s more “Hi, Jack.”

Each week, “Wednesday’s Child” features a special needs child who is in search of a permanent home. Over the years the segment has helped more than 490 special
needs children find loving homes. Williams is responsible for raising more than $3,000,000 for the Massachusetts Adoption Resource Exchange, a non-profit agency that matches special needs children with adoptive families.