Local Architects on Designing With an Eye to History

The historic homes of Wellesley and Weston are an important part of the defining character of these stately communities. Tree-lined streets, surrounded by well-maintained homes 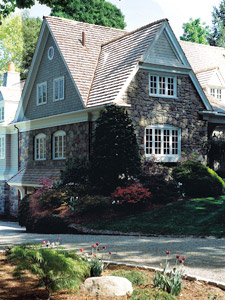 with distinctive architecture, sets these towns apart and is an immediate draw for visitors and soon-to-be homeowners, as well as residents who relish the inherent grace embodied in this architectural style. Celebrating and preserving these stylistic elements is an art that has been perfected by several local architects and builders who take their responsibility very seriously. The homes they have helped restore and remodel throughout Wellesley and Weston give us an architectural history lesson that should be cherished for its reverence for the past and its eye on today’s style of living.

Whether Colonial or Shingle-style, Craftsman or Victorian, in the restoration, remodeling, or addition of rooms, stories, entries, or cottages, perhaps the most important factor for the architects of these improvements is the sympathy they show to the existing structure and the seamless changes they are able to create.

Jan Gleysteen, of Jan Gleysteen Architects in Wellesley, for instance, feels there is a cultural commitment in New England to the architectural standards that have been set over the past three hundred years. Imbued with colonial roots, there is a obligation to make buildings that endure the test of time. Jan is a purist who sees much in modern building that lacks the structural reliability our predecessors would never have tolerated. “Older architecture,” he says, “has been refined and refined.” The evolution of the forms and building practices has therefore resulted in homes of intrinsically higher quality, which is evident in their age, beauty and relation to their settings.
Attracted to New England for the historic nature of the surroundings, Jan loves both the traditional and modern styles, but is drawn to classicism. He is moved by the rhythm and relationship to the human scale as well as the very defined structure and symmetry that are so much a part of this school of architecture. He explains that the “hierarchy of the architecture, a major wing, a minor wing,” are classic strategies he employs in his work. “Everything has been done,” Jan offers, suggesting that we study and learn from the past and implement these rhythms in current design. “We discover who we are by looking at the past.” He adds that enduring design that still appeals today, even with the use of some modern elements, illustrates the strength of these architectural principles.

There is an ethos of classicism, he explains, and an intellectual basis for why things are placed as they are, “rooted in humanism, designed to fit around us,” and wed to human scale. Jan utilizes all these principles in his architectural practice and believes they help him create better homes for his clients, ones in which they feel they belong. “The fundamentals that touch us in older homes reach out to us with their charm, scale and handmade character.” Older homes can really feel comfortable and appealing while preserving two things: “We are preserving spirit, and a flavor of the past, and adapting this to modern functions.” In our fragmented and over-programmed lifestyles, the past helps anchor people back down.

John Chapman, principal at John Chapman, Architect of Wellesley, is another local architect who professes to be sympathetic to the environs in which he is working, paying careful attention to the philosophy of the original style. For the restoration of a 1690’s home in nearby Dover, John brought a portion of the home back to its origins with a museum-quality approach, using old growth wood, for example, that would fit in and maintain the true colonial feel. 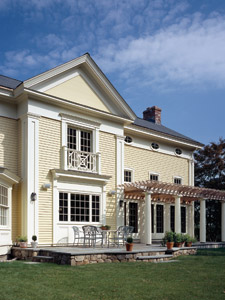 John kept the exterior of the house in scale, putting on an addition that had “sympathetic” rooflines to the original structure. The interior, however, was greatly expanded to accommodate a more modern lifestyle, but he scaled down the corners, adding in soffit work and cozy niches so the historic ambiance would not be altogether lost. To ease the transition between old and new, John employed some traditional materials that have withstood the test of time for both durability and style. Materials such as old brick for the fireplaces, brick floors, soapstone in the kitchen, and old wood plank flooring, wood ceilings, and details that evoke the past were specified to recognize the authority of the home’s important roots.

John suggests “preserving the essence” of the home and being “sympathetic to the character” as the best methods for preserving the past and building on in the modern age. If it is too historic it becomes a museum piece and may not be comfortable for today’s lifestyles. And while he likes to match detail on the exterior, he believes you should liberate yourself on the inside and leave the fussiness behind. A few of his particular favorite resources include Long Lease Lumber in Somerville for old wood flooring and beams, and the Period Home Catalog, which can be found at http://www.period-homes.com and is an excellent source of lumber, hardware, lighting fixtures and connections to craftsmen.

Yet another approach is exemplified in the work of Wellesley resident Patrick Ahearn, a principal at Ahearn Schopfer and Associates of Boston and Edgartown, on Martha’s Vineyard. Keeping an eye on the past, Patrick prefers romantic and intimate houses of character that imply history rather than being scripted by it. He interprets historic models in classic architectural forms that recognize their charge to serve today’s way of life. He uses the past as a vernacular guide and refers to his work as non ego-driven architecture, taking a cue from existing structures, while creating seamless updates and remodeling.

Much of this philosophy is exemplified in his own home that has seen five major additions, including a pair of two-story wings, a new front entry, and a garage. Growing from its lineage as a 1936 Royal Barry Wills stone cottage (originally built for Miles Standish Jr., who must have been several generations removed from our colonial founder) the home grew organically over time under Patrick’s design direction. Important details, such as lintels, stonework, and columns, were retained in each of the remodeling projects. This technique ensures that the new pieces will look as if they have always existed on that site.

Remaining true to architectural roots, creating seamless improvements that blend in with existing homes and neighborhoods, and having a reverence for and understanding of the details that matter, enables these architects, and many others in the local building trades, to retain the charm and sophistication of Wellesley and Weston. Challenged by the proliferation of tract developments and the McMansioning of the American suburbs, these professionals are keeping our standards high and bring distinction and recognition to the towns for their architectural significance for generations to come.