Imagine sitting on the edge of your seat, captivated by an intriguing combination of surprise and wonder, mixed with an intimate physical and emotional closeness. Your neighbor, of all people, looking vulnerable as an underdog heroine, has just taken you to 19th-century England. You are astonished as the shy young man you remember from your daughter’s kindergarten class belts out a verse with surprising confidence. You hold your breath as your spouse delivers, flawlessly , the monologue he has been rehearsing “just one more” time for weeks. 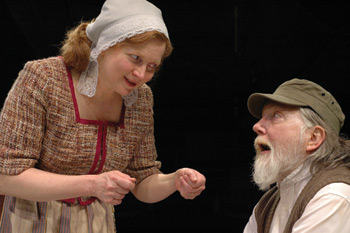 Welcome to the world of local theater, alive and well in Wellesley and Weston. We live amid an extraordinary wealth of talent of all ages, for all ages.
“People are running around so much, they tend miss what’s in their own backyard,” says Betsy Soule, president of The Weston Friendly Society of the Performing Arts. “It’s hard to find a feeling of town cohesion. [Community theater] is a great opportunity to work it into their lives and their traditions.”

For as little as free and as much as (gasp) $22, you can find excellent theater in your community. From Bye Bye Birdie to Brigadoon, the Bard to the boy next door, there are opportunities to experience the arts in an intimate setting. Just you and 400 of your closest friends.

Approaching its 122nd season, The Weston Friendly Society of the Performing Arts is the second oldest theater group in Massachusetts. Originating as a forum for group readings of classic books, poetry, and the Bible at a Weston estate’s small theater, the Friendly now welcomes audiences over 300 for their two annual Town Hall performances. 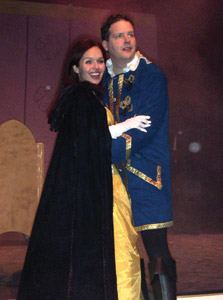 A concerted effort has been made to target family-friendly musical shows, according to Wardwell, with past performances including Beauty & the Beast, A Funny Thing Happened on the Way to the Forum and Oklahoma!

“It can also be a real social event,” she adds. “We put in cabaret tables, so people bring in food, wine, champagne and set a whole spread for themselves.” For those who prefer not to cook, refreshments are also available.

The mission of the Society is clear (and friendly). They describe themselves as “a non-profit performing arts organization which promotes community service and fellowship through support of local charitable causes.”

Although Wardwell has acted in a few productions (South Pacific and Annie Get Your Gun), it’s this idea that’s the real appeal for her. “They don’t just put on plays, but they also donate money back to the community,” she says. Beneficiaries have included a Weston-based special needs Cub Scout troop, the Juvenile Diabetes Research Foundation, Waltham Food Pantry, domestic violence centers, and a hospice.

“I think people in the local community appreciate the fact that we’re giving back to their community,” agrees Soule.
The Friendly also established the Evangeline and John Condakes Memorial Scholarship, named after a long-time member couple. It is awarded to qualified students so that they may attend the Weston Drama Workshop summer theater camp.

“We give out awards to a senior boy and girl at Weston High School,” says Soule. “It’s usually a kid who doesn’t necessarily get the leads, but who gives back to the community. It’s not about talent all the time.” 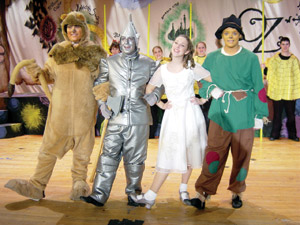 It certainly is about the talent at times. And often that talent surprises.

There are a few opportunities to watch Wrobleski’s students at their best—a fall musical, a winter play, and a spring play. Excellence is the result of intense commitment: five days a week, three hours a day. It all paid off this year, when the students’ production won in the Massachusetts High School Drama Guild Festival.

“It was a banner year for performing arts in Wellesley,” boasts Wrobleski. “The quality of the shows and the level of confidence and ability – you can’t judge it because they’re young. Some of these kids might be the future people you’ll see in Boston.”

“They haven’t performed this stuff 52 times in three months,” adds Elizabeth Perry Scanlon, Wellesley Public Schools Performing Arts Director, commenting on the freshness of watching student performances. “You see an excitement that you might not get from people who are repeating the same show over and over. It’s a passion for the kids.”

And it’s this passion that keeps not only family and friends, but local theater-enthusiasts glued to their seats during such Wellesley productions as Damn Yankees, How to Succeed in Business Without Really Trying, and The Wiz.

Weston High School has also had its share of amazing performances, including Les Misérables and Shakespeare’s Measure for Measure. There’s even a check mark in the win column as 2005 state champions in the same competition that Wellesley captured in 2006. This year’s group was also chosen to represent American high school theater at the Edinburgh festival in Scotland, a trip they were sadly unable to make due to budget cuts.

“Some of the acting you see in a high school is more raw and honest than you’ll see with a lot of professional actors,” says Shawn Cody, graduate of Weston’s Class of ’94. A self-proclaimed “theater fanatic” in high school, Cody began his own theater group called Shakespeare East with a few fellow Weston classmates. Shakespeare East is still going strong, with performances both locally and in New York City.

“There’s an emotional intimacy as well as a physical intimacy with local theater that you won’t find in Boston,” he continues. “They aren’t worried about a paycheck and it’s not just a job. You’re seeing someone at the beginning of their lives, and isn’t that thrilling?”

“When you’re watching a student-run performance, it’s very close to home. The audience can appreciate the work and realize how hard it is,” adds Alexandra Siegel, Weston Class of ’06. Siegel has set her sights on the Tisch School of the Arts at New York University, as a winner of the Massachusetts High School Drama Guild Acting scholarship. “Since they aren’t expecting the level of Broadway, when they see the capacity and how amazing the kids are, it’s more striking.”
The man behind the curtain of Weston’s success is John Minigan, drama teacher at Weston High for the past 19 years. His students put on three shows a year: a fall play, an original winter piece, and a musical in April. A smaller cabaret style performance in June delights audiences with monologues, comic improv, and musical acts.

“Part of it is how are these kids going to achieve this and then they actually do. It’s more remarkable and miraculous than when you see professionals.”
Some talented students go on to bigger stages: graduates from both schools have garnered places in Julliard, the National Tour of Bring in Da Noise, Bring in Da Funk, New York City cabaret, and Broadway, not to mention television favorites Coupling and Desperate Housewives.

Both schools can give the parents a standing ovation for their support. Wellesley’s Parents of Performing Students (POPS) and Weston’s Community Alliance for Student Theater (CAST) are extremely active in helping these students achieve thespian status.

Regardless of the potential future fame and fortune, we can say, “we knew them when.” It’s this relationship with the people on stage that’s the fun part of local theater.

“There are people that you know on stage,” says Wrobleski. “That makes everything even more intimate.” Minigan echoes the sentiment, “There’s more of a connection to what’s going on, because the theaters are smaller.”

The Wellesley Players
In a local theater production, you might see people from your neighborhood on stage. But their furniture as well?
“Everyone’s living room has been on our stage,” laughs Robby Morse Levy, past president for The Wellesley Players and current development chairperson. “Another thing about supporting local theater, there are surprises—like seeing people’s furniture in shows.”

In this group’s case, you’ll also see a mix of generations, as local high school students add to their school-play schedules with a few Wellesley Players performances.

“Differentiating between the high school seniors and the community theater groups, we are intergenerational,” explains Levy. “A lot of our children are active in the Wellesley Players,” she continues. “And they have gone on to do great things. We’re proud to nurture the next generation and impact them with our love of theater.”

Eighty-one seasons and more than 150 productions after their 1925 founding, they’ve found a new home at the Sorenson Center for the Arts at Babson College, a “state-of-the-art gorgeous wraparound mini-opera house with 420 seats and gorgeous sound and lights,” describes Levy.

They put on two shows a year (a fall play and a spring musical) and past productions have included La Cage aux Folles, The Diary of Anne Frank, and The Wizard of Oz (a signed performance through a grant from the Decibels Foundation). “We’re always looking for new and exciting things to keep theater alive and keep people’s passion,” says Levy.

“The quality of the Players productions is really unbelievable,” says Cathy Spear, president of the Wellesley Players. “People have said that if they had paid $100 for a ticket to some of our musicals, they would have been thoroughly satisfied. There is a sense that you’re supporting the community and also seeing some fabulous theater.”

Their talent shows, with several awards from the Eastern Massachusetts Association of Community Theaters, including best actress, best ensemble, and best stage manager.

“The theatre company has been around for eight years, and serves as a conduit to which students come through the college productions and then intern with the company, taking on larger roles as time goes on,” explains Nora Hussey, director and founder of The Wellesley Summer Theatre Company and the director of Theatre and Theatre Studies at Wellesley College.

“The company is a professional offshoot that works in tandem with the academic program. It incorporates and blends members of the Boston community with our graduates, alums, and some students,” she adds.

Within its eight annual shows, the academic program has performed a wide variety of productions including A History of America, The Scarlet Letter, and Noises Off, to name a few. The professional company adds to that list with its Barstow stage children’s show, as well as a summer and a winter show, both in the Black Box theater. Past shows have included Pride & Prejudice, The Philadelphia Story, Enchanted Sleeping Beauty, Alice in Wonderland, and Cinderella. The Black Box was a generous donation of Ruth Nagel Jones (Class of ’42), the daughter of Conrad Nagel, founder of the Screen Actors Guild. Jones also bestowed an operating fund for the professional program.

Your Own Stage
Whether you find yourself laughing during Much Ado About Nothing or sobbing through Angels in America, there’s a stage set for every emotion in Wellesley and Weston.

“The opportunity to really belong to a piece of theater doesn’t happen downtown,” says Levy. “Downtown you’re entertained. In community theater, you have a personal connection.”