Funky, Historic and Full of Life

College-area residents see themselves as caretakers of history
The second in a series of articles where we explore the history, traditions, and people that create the unique character of each of Wellesley’s distinct neighborhoods.

There’s a neighborhood in Wellesley that has been home to the first settler in town, the first golf course in Massachusetts, the first sawmill in the United States, to minutemen, an 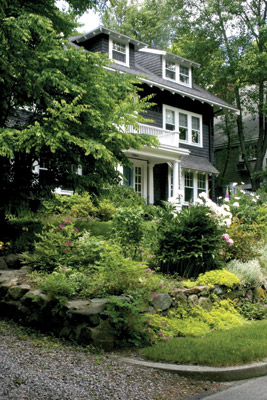 astronaut, a shoe factory, and a Nobel Peace Prize winner.

It’s a quirky place that delights in its eccentricities, an area its residents call “funky” and “the closest thing the suburbs have to Cambridge,” a section where architecturally creative 19th-century bungalows and cottages nestle closely together, next to Gothic brick apartments on established, tree-shaded lanes.

The “College Area,” with its borders roughly extending along Washington Street between Dover Road and the shops clustered around the century-old E.A. Davis, is anchored by Wellesley College, and the number of faculty who live there give it a distinctly proud, academic flavor.

“We feel like we’re part of the extended Wellesley campus,” says Marjorie Damon, who has lived on Belair Road for 37 years. “Having the college nearby is great — we audit courses, have picnics by the lake, walk to concerts, had student babysitters, and there have always been intellectually stimulating faculty members interwoven throughout the neighborhood.”

The neighborhood is thickly populated now, but 350 years ago it was home to only a few members of the Massachusetts Tribe (the name meant those who lived “around Great Blue Hill”), led by Chief Waban (“the Wind”). In those days, it was the guttural Algonquin language you would have heard as you walked their winding forest path from Newton to Sherborn (later to be named “Washington Street” after the President who rode its shady length and said “nature seems to have lavished all her beauties here”).

When in the 1660s English settler Andrew Dewing built his garrison house, the first in what would become Wellesley, he settled next to the Indians, seeking their protection. His neighbors had recently added a new venture to their ancient survival skills of fishing and hunting: they’d built a sawmill near Lake Waban, reportedly the first in the country.
A century later, a different group of residents lay claim to the area. On April 19, 1775, Wellesley’s (then West Needham’s) minutemen gathered at the town’s central meeting place, Bullard Tavern (now the East Lodge of the college, on Washington Street opposite Upland Road). Led by innkeeper Ephraim Bullard (who, ironically, had served ale to British soldiers for years), these farmers marched from there into history.

But the area’s most lasting historical legacy began in the mid-1800s, when Charles Lovewell built his shoe factory near the corner of Washington and Cottage Streets, followed by dozens of the cozy, charming little homes that gave the latter street its name. The factory produced the tops of shoes; workers did the “bottoming” in their homes, producing up to 17 per day.

Unfortunately, a new factory followed in 1875 (the same year that Wellesley College began across the street), a monstrous (and monstrously ugly) four-story wooden building right on the corner. Its steam-run machines, shrilly piercing whistle, and deluge of out-of-town workers resulted in what the newspaper called a “blight on the otherwise lovely countryside.”

And so, eventually, the neighborhood’s most prominent citizens (town benefactor Horatio Hollis Hunnewell and Mrs. Henry Fowle Durant, the widow of the founder of Wellesley College, both of whom lived nearby) bought it. They tore down the offending factory and restored “peace, quiet, and beauty” to the area they loved.

A century later, Wellesley declared the Cottage Street area its first “Historic District,” commemorating the architecture and story of those early little homes, and protecting them from change. 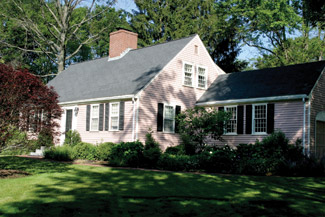 “There’s a wonderful sense of mingling history and the present for Cottage Street residents,” says Suzanne DeGruttola, who has lived there since 1969. “We feel very strongly the responsibility of being caretakers for these historic homes. It’s a legacy we cherish.”

Residents speak of a strong feeling of neighborhood binding them together, a spirit they celebrate through progressive dinners (each course at a different house) and block parties (where they close off the street all day and bring out folding chairs and grills). They point proudly to a number of “creative eccentrics” in their midst, musicians, artists, and one man who housed an antique fire engine in his garage.

“We’re very keen on preserving our Historic District, because it is Wellesley’s unique past and will have great meaning to future generations,” DeGruttola says, noting that many people who move to the area have been attracted to it because of its history, undaunted by the building regulations the town imposes. “We really enjoy the feeling of the past, the history is very important to us.”

Many residents display in their living room some antique treasures they have discovered in the attic, the basement, or even the walls of their homes during renovation; the DeGruttolas have old traveling trunks and some 1800s coins their children found while digging in the backyard.

Cottage Street came to the attention of the literary world when Pulitzer-Prize winning poet and Wellesley professor Richard Wilbur wrote one of his most-anthologized poems, “Cottage Street 1953,” about his first meeting with Wellesley poet (and future Pulitzer winner) Sylvia Plath, then a college student (on the brink of the events of The Bell Jar summer), in his mother-in-law’s home there.

At the other end of the neighborhood from Cottage Street is the Nehoiden Golf Course (named after the Indian Chief, and where author John Updike learned to play), one of the oldest existing nine-hole courses in the country, and located just a few hundred yards from the first golf course in Massachusetts (set up in 1892 on Arthur Hunnewell’s property).
The area in between Nehoiden and Cottage Street has been home to Wellesley professors like Jackie Jones (winner of a MacArthur “genius grant”), Chilean poet (and U.N. Leadership Award in Human Rights recipient) Marjorie Agosin, Lolita author Vladimir Nabokov, and world-renowned experts on Russia and China, Marshall and Merle Goldman.

A representative of the Norwegian parliament came here to present the 1946 Nobel Peace Prize to 79-year-old Emily Balch, the Wellesley professor who spent the last 35 years of her life at 17 Roanoke Road, and who was too ill to travel to Oslo for the ceremony. She called her few tiny rooms at the left of the shared house “Domichek,” Bohemian for “the Little House,” and tended her garden of tulips and valley lilies, dubbed “the Thicket.”

“It’s a very congenial atmosphere,” says Carol Johnson who, with her husband Roger, a retired Wellesley religion professor, has lived here for more than 40 years. “The area is rich in people who have chosen to come here because of academics — either because they want to enjoy the closeness of the campus for learning and cultural events, or because they are faculty.”

Wellesley College owns many homes in the area and rents them to professors, and also has a number of dorm-like apartments for younger teachers. There is even French House, a dormitory for students who want to speak around the clock the language they’re studying.

It’s an atmosphere of creativity and intellectual stimulation that has nurtured such recently-discovered young talent as fiction-writer Adam Haslett, who grew up here, as a recent college graduate was a finalist for the 2003 Pulitzer Prize, and received a prestigious Guggenheim Fellowship.

It’s also a neighborhood that is, as a long-time resident calls it, “full of life.” There are block parties, intense political debates, play-reading groups, street volleyball games, many book groups, and star-watching parties on the Nehoiden Golf Course. Recently, more than a dozen residents opened their yards for a neighborhood garden tour to benefit the Edward Everett School in Dorchester.

“It’s a great place to live,” says Marjorie Damon, who moved here in 1969. “We enjoy each other tremendously. The location is also key. We walk all the time — not only down to the shops, but around the lake and golf course, to the aqueduct, and primarily along the Brook Path. What a fabulous treasure that is to have right at the end of our street.”
The spiritual center of the area is St. Andrew’s Episcopal Church, near the site of the old shoe factory. Looking like a rose-encrusted piece of England, it harkens back to that country’s village feeling.

“Our neighborhood is a wonderful little micro-community,” says the Reverend Addison Hall. “We know our near neighbors, who go by our door every day, and who walk over to join with our larger community in coming to special events.”

One of the most popular of these is the Blessing of the Animals, held each fall, where nearby families come with dogs, cats, chickens and even sheep. Reverend Hall leads the service in the courtyard near a bronze sculpture entitled “The Animal Lover,” by local artist Merrilyn Marsh. Earlier this year, at a separate ceremony, the church’s new organ was dedicated in memory of lifelong neighbor Walter Hunnewell, the descendant of the town’s founder.

Other residents who don’t want to leave their neighborhood have chosen to have their ashes buried in the church’s Memorial Rose Garden.
In the shadow of St. Andrew’s is the Denton Road area, home to not only an astronaut (space shuttle specialist Byron Lichtenberg), but also the Denton family, who in the 1890s were world-renowned for their extraordinary and pioneering collection of butterflies, more than 1500 of which are now at the Wellesley Historical Society.
Also within walking distance is the neighborhood’s 68-year-old Hunnewell School, named after the town founder whose mansion still graces Washington Street.
“I am certain that Horatio Hollis Hunnewell would be proud of the current school community that bears his name,” says principal Dr. Sharon Hobbs. “He would find his legacy playing out in the children who love poetry, who read over 2200 books and walk over 25,000 miles, who care for the bugs on the playground and each other.”
The neighborhood families come together at the school for the annual Fun Fair, ice cream social, sock hop, PTO auction, and skating party; they build the school float for the annual town parade; they provide for area shelters through “Hunnewell Helps;” and they celebrate traditions, such as protecting the 300-year-old tree in the front.
Someone who clearly understands the sense of the neighborhood, with its respect for the past and enjoyment of the closely-knit feeling of the present, is Rob Skolnick, who grew up here, attended Hunnewell School, and is now President of E.A. Davis (at 102, the oldest business in Wellesley, and a landmark in the cozy crop of shops that mark the eastern boundary of the neighborhood). His father bought the store in 1975 when Rob was just a child, so its history and role in the community have always been integral parts of his life.
“We see so many familiar faces every day, neighbors who stop in just to say hello, customers who bring their dogs, those who feel like this is ‘their’ store,” Skolnick says.
“My Dad always emphasized that we are custodians of a legacy. We just happen to be here now. Wellesley is losing so much, so it’s even more important to keep a sense of its history, its relationships, its charm. We may change with the times, but we’re loyal to our roots as well. This is a very special neighborhood, and we’re proud to keep its unique traditions alive.