An interview with Howie Carr
Wellesley’s own shock jock reveals his kinder, gentler side

Wellesley resident Howie Carr is a familiar voice to talk radio listeners in the Boston area. In his Boston Herald column and on his WRKO drive-time show, he lambastes politicians, mobsters, and any newsmakers of the day whose antics he finds amusing, reprehensible, absurd, or peculiar. Since February, Carr has gained national recognition with the publication of his book, The Brothers Bulger: How They Terrorized and Corrupted Boston for a Quarter Century, which spent five weeks on The New York Times best-seller list. 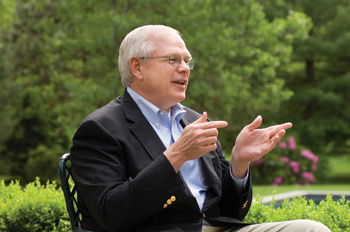 At home, surrounded by family portraits, Carr’s persona is gentler. He serves a guest coffee on the terrace overlooking his swimming pool, then reaches down to lift one of his black pug puppies into his lap while he talks.

Carr moved to Wellesley in 1993 when he married Kathy Stimpson, a Wellesley realtor and native of Weston. The Carrs have three daughters: Carolyn, 12; Charlotte, 11; and Christina, 9.

WellesleyWeston Magazine: What would you consider to be the defining experiences that led you to where you are today?

Howie Carr: I was a student at Deerfield Academy and they said you had to have extra-curriculars to get into a good college. I wasn’t a good athlete, but I looked around to see if there was stuff I could do. I’ve always read a lot of newspapers, so I went to work for the Deerfield Scroll, the school newspaper. Pretty soon the Greenfield Recorder was taking columns out of my paper, and I was stringing for the Boston papers, writing the local high school football game stories.

Then when I got to college, the University of North Carolina, I started writing for the daily Tar Heel. That’s how I got into journalism.

After college, I got a job at the Winston Herald Journal, then I moved back to Boston and worked at the old Herald American. After that, I worked at Channel 7 ( the old WNEV-TV) when it was owned by David Mugar. I went back to the Herald when Rupert bought it and I’ve been there ever since.

WW: How did you get involved with writing and talking about politics?

HC: I got sent up to City Hall around 1980, to cover Kevin White’s last term as mayor. It was just an amazing time for a reporter. Everything was totally out of control — people were being indicted and dragged out of City Hall every day. A lot of them were street criminals who had been moved up in the organization. That was when I first realized that there was this tie between street crime, or organized crime — whatever you want to call it — and political crime.

WW: On a recent 60 Minutes show, Bulger henchman Kevin Weeks claimed that he waited in a graveyard next to your home in Acton, and even had you in his rifle sight. Is it creepy to think about being a target of the kinds of guys you wrote about in your book?

HC: What happened was, in the late 1980s, I worked at Channel 56 in addition to the Herald. Channel 56 is at the Globe, so I had to drive between the Herald and the Globe every couple of days. And you go right by the liquor store, the South Boston Liquor Mart, where they hung out. Whitey would be hanging out on the street with Steve Flemmi. They’d be right outside the store, because, number one, it was a good place to get sun, and number two, they couldn’t bug him because there was that rotary right there. So it was a nice place to do business.

At that point, he knew everybody, or at least he knew a lot of people that went by. And he knew who I was, and he’d just stare at me. One night Jack Hines walked into the liquor mart, and they said, “How come Howie never comes in here? You tell Howie that we have a dumpster ready for him. He’ll be another Robin Benedict.”

When Jack told me that the next day, I thought, I’d better really start watching myself. Probably when they deliver a threat they’re not going to do anything, but you can’t really count on it, because they’ve killed people just because they were around and they didn’t like them. When Whitey was around, I was really scared. I went home a different way every night. And I was never in a bar, or a gloomy area after dark. I didn’t want someone to call him and tell him I was there and he’d just grab me, or probably shoot me. Once he was gone though, I never really worried about it.

The funny thing was, 60 Minutes came to me like I was going to be really frightened. They said, “We’ve got some things we can’t tell you about now, but we’re going to tell you when we interview you.” And I said, “Is this about the graveyard?”

I told them to look in my book – I mention the graveyard. Weeks knew that I lived next to a graveyard because his brother lived right behind me. He told that to Herald reporters and photographers as far back as 1997. The State Police used that as part of their affidavit for holding him and Kevin O’Neill. Weeks just had to embellish a story to sell his book. That’s why I didn’t have too much to worry about. And also, he said that he was lying in the leaves and shooting at me, and I didn’t realize this until after the interview, but there was a four-foot high stone wall on the graveyard border.

[The 60 Minutes interview] was good for me — it turned out better for me than for him. I’ve outsold his book, I don’t know, five-or-six to one. Weeks was really angry with me because I called him out on it. I guess I was supposed to cower. Come on! I’m not going to cower for Kevin Weeks. 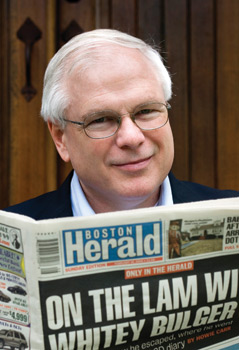 WW: Where do you think Whitey is today?

HC: I think he’s in the UK. I’m positive he isn’t in the US and hasn’t been since 1996. He could be any number of places, but I tend to think as he gets older — he’s 76 now and wasn’t in the greatest health when he left in ’94 — that he’s probably just hanging out somewhere. I don’t think he has contact with anyone in Boston. It’s too dangerous at this point. He doesn’t control the FBI anymore.

WW: Why the UK? Wouldn’t that be a hard place to go underground?

HC: They don’t have the kind of power that they have here, where [the authorities] can get phone records easily and get a subpoena quickly. You have to go through Interpol to get to Scotland Yard, and they have all these privacy rights.

WW: Do you think the blanks will ever be filled in? Or do you think Whitey will be kind of like Jimmy Hoffa?

HC: In terms of being a legend, I think he’d rather be someone like Jimmy Hoffa, or D.B. Cooper, or Judge Crater, or someone like that.
But I get the feeling that if he goes, someone will try to claim the reward. That’s one thing about the Bulgers, they never leave anything on the table. And this is a million bucks. Plus he’s got the woman with him. Some people think he killed her, but I don’t think so. If you have an elderly man and a woman traveling together, and they look like tourists, that’s not too suspicious. But just a really strange-looking old guy with the general demeanor of a serial killer — that’s going to stand out.

WW: What’s that — the general demeanor of a serial killer?

HC: He can be charming, but he can change in an instant. He just has this terrible temper, or he did. He always carried a knife in his boot, and he would explode at any time. If he didn’t like you, he’d just stare at you silently, and then jump up and threaten to kill you. He’s not a nice guy!

WW: Was it difficult moving from day-to-day journalism to writing a book?

HC: Yes, it was. There are no real Maxwell Perkins-type editors in New York. They make you hire a book doctor. He’d go over the things with me. I ended up turning in a manuscript that was 460 or 470 pages, and it was too long. I had to go back and cut it out again. Most people are into reading 350 pages; they’re not into reading 500 pages.

WW: Did you leave out anything juicy?

HC: No, there’s some stuff that I’ve found out since then that I would have put in, but that’s the way it goes. Sometimes when you’re riding home from the station, you think of something you should have said, it would have been a great line. That’s the great thing about newspapers or radio, it’s like baseball — you’ve always got another shot at it the next day. You can make up for it if you struck out two or three times.

WW: What’s your favorite subject for a show or column? Is it crime or politics? Or is it something completely different, like dogs?

HC: No, I’d never write about dogs. I like politics. All I want to do is amuse people. A perfect radio show for me would be Patrick Kennedy getting into that auto accident and then going into rehab. I was the first one who printed the police report of Portsmouth, Rhode Island two weeks earlier. It was pretty clear he was stoned out of his mind. It was my story. And people just love ripping Kennedys.

WW: Do you have assistants or interns who go through everything and pick up these stories, or do you do it yourself?

HC: I do a lot of it myself. I’ll go downstairs and start going through the Internet. My readers help me out a lot. With “Patches” Kennedy, somebody sent me the tiny little three-paragraph story they put in The Providence Journal and said “look how they tried to bury this, Howie.” I called and got the police report. We put the police report in the paper and on the Internet. And then I gave it to the Weekly Standard to get some national publicity.

WW: Do you plan to write other books?

HC: I’ll do something — I don’t know what it’s going to be. I have another few weeks of book signings, and then I have to sit down and think about what I want to do. Most of the people at the book signings would like a Kennedy book. The [first] book did very well, but it was mainly a New England book.

WW: Is there anything people would be surprised to learn about you?

HC: I don’t think so. I’m on for four hours a day — too long every day to lie. If I lied, sooner or later I’d forget. So I have to pretty much put all my cards out on the table.