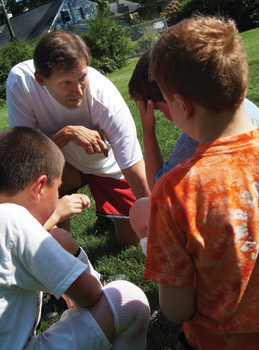 Wellesley resident Scott Wilson had worked in the business world for 20 years, with high-powered, high-pressure positions in venture capital and investment banking. By the time he hit his early 40s, he thought about switching careers so that he could work with young people and spend more time with his children. Then a friend of his, who had children about the same age as Wilson’s, died of a heart aneurysm, instantly and without warning.

That tragedy was one of the factors that ultimately motivated Wilson to make a transition in his career. Other local residents have made a similar decision for more mundane reasons: an early retirement, children leaving the nest, a chance to try something new. For these people, mid-life is a time not for crisis but opportunity.

According to Tim Driver, founder and CEO of Wellesley-based RetirementJobs.com, nearly seven out of ten people want to continue to work after they leave their primary career. These mature workers will make up 20 percent of the U.S. workforce by the year 2012.
“The 50-plus workforce is the most underutilized segment of the labor force,” he says.

His recently launched company, whose Web site matches employers with older job seekers, conducted a survey showing that these workers desire flexibility, a short commute (something Driver enjoys as a Wellesley resident), and social and intellectual stimulation. Many also seek to use their skills and life experiences to serve others.

For Folly Shaffer, 59, her new career has brought her to a place where she can help children in crisis. A psychotherapist, Shaffer left her Wellesley home last year to stay with a friend in Baton Rouge, Louisiana, while recuperating from a broken hip. Then Hurricane Katrina struck, killing hundreds and leaving survivors homeless and traumatized. Shaffer answered a call to work with schoolchildren, using expressive therapies such as music and drawing to help them recover. 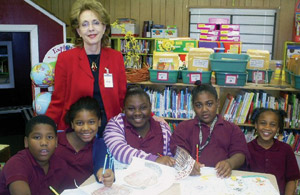 It has been “an unbelievable opportunity to do something totally different,” says Shaffer, who planned to return to Massachusetts after working on a summer program with the children in Louisiana. She has traveled a long way in more ways than one. A former children’s librarian while in her 20s, she had always gravitated toward human services, she says; even while working at the Boston Public Library, she was most interested in the life stories of the people who visited. But the jobs she took since then provided little satisfaction. So after she raised her children and divorced, Shaffer returned to school at age 49, earning a master’s degree in counseling and psychology from Lesley University in 2001.

“At that point I said I really need to find a purpose in life. I wanted something that challenged me, that I could put my energy into,” she says. “It’s like diving into a pool when you’re really not sure you can swim. Sooner or later you have to jump in or walk away.”

Occasionally she wishes she had jumped sooner to pursue the career she calls her true calling. Then again, her life experience has enhanced her ability to perform her job and make a difference in people’s lives, she says.

“You choose things when you’re in your 20s that maybe are not your true calling in life,” says Shaffer. “I think a lot of people can relate to that.”
Or, in the case of Wilson, 52, you choose something in your 20s that you return to later in life. After college, Wilson taught high school math at Worcester Academy. He left to go to business school, doubting he could support a family on a teacher’s salary and unsure whether he could sustain a passion for the job for the rest of his working life.

When he decided to go back to the classroom, most people he knew encouraged him. Yet a few warned him about the kids “these days”: young people didn’t want to work, they said, and he’d be sorry. Luckily, Wilson says, they were wrong.

“I think the heartening thing is that kids are just like you and me,” he says. “We all want to be respected and appreciated by our peers and by our elders and recognized for our good work. I don’t feel kids these days are any different.”

He got his first teaching job the second time around after he contacted an old friend at Worcester Academy to have lunch and get feedback. But Wilson got much more – a job offer from his old school. He stayed there for four years, and has now moved on to teaching math and economics at Noble and Greenough, a private school in Dedham.

When he started teaching, he didn’t talk much about his former career. But he found that he could incorporate his experiences in the classroom to the benefit of his students. Now, he says, in his teacher evaluations, both peers and students encourage him to keep telling stories about what he’s done in his prior life.
For the most part, however, Wilson has left that life behind. He once had a corner office and a secretary to handle all the details of his professional life. Now he does his own photocopying and doesn’t have his own phone at work. Still, he says he doesn’t miss the perks (except for the Red Sox tickets) and the power of the business world.

“I’m happy in what I’m doing,” Wilson says. “Teaching is my life right now and I don’t look back. I am focused on creating the best classroom environment and experience for my students today.”

Howard Hayman of Wellesley never would have imagined that his second career would also be devoted to education – the education of dogs and their owners, that is. A former vice president with Verizon, Hayden had been with the telecom company and its previous incarnations his entire career, and had long planned to retire at age 55. He just wasn’t sure what he would do next. 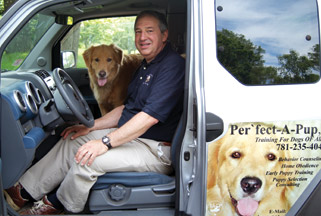 One thing he did do was get a dog, a golden retriever, who joined the household after the death of another golden a few years before. Hayman, who had dogs throughout his life, worked with a trainer and was intrigued by the process. So he went with his new pet to the National K-9 Learning Center in Columbus, Ohio for a training program to become certified as a dog trainer and behaviorist.

The job dovetails with the zeal for customer service he displayed in his previous career, says Hayman, 58, who’ll run to clients’ homes if they have any problem with their dogs. Although he’s training the pets, he’s really training their owners, he says.

“Having had so many people work for me and understanding their different personalities in different situations really plays to the business that I’m doing now,” says Hayman.

Like Wilson, Hayman enjoyed the executive perks of his former job. When he arranged his own itinerary to travel to a recent dog-training conference in Texas, he realized the luxury of once having a secretary who planned his schedule. He acknowledges that he sometimes still clings to the status of his former job, telling people that he’s a retired officer from Verizon before revealing his current pursuit. Indeed, if someone would have told Hayman five years ago that he would become a dog trainer, he would have laughed at them, he says. But now, after about a year in his own business, he embraces his new life in service to his customers – and the people who own them.

“What is very clear is that you need a reason for being,” Hayman says. “It doesn’t have to be a high-powered job.”
Driver notes that many retirement jobs may not have the status and power that people were accustomed to in their former careers. He counsels mature job seekers to expect, for example, that younger people may supervise them in a new job. He also urges them not to overlook an opportunity just because it’s different from their past experience. One of his site’s corporate partners, Borders books may offer a good fit for those interested in literature, he says, even if they wouldn’t normally gravitate toward a retail job.

“People at first blush thought of a job as not being quite appropriate for them,” says Driver, “and then realize that it’s really interesting and stimulating.”
Shaffer recalls family members who told her that psychology wouldn’t be right for her. They didn’t understand the field and in those days didn’t believe it could be a profession for a young woman. She went with the safer path, she says, and became a librarian instead. It would have been safer as well not to return to school with people half her age, with whom she was “scared to death” of competing.

In the end, she got all A’s, which was much better than she did in her earlier school years. It made her understand of what she is capable, as well as others, no matter what their age.

“It’s good for people to know that age is a state of mind, and as long as you’re alive you can do amazing things,” Shaffer says. “All of us can. All of us should.”