Wellesley Country Club has a lot to celebrate this centennial year. Its new 53,825-square-foot clubhouse is fully operational. Its 18-hole golf course is playing host to several major tournaments that included the 101st Massachusetts Open Championship in June (see sidebar). To cap it off, the Club’s history will be preserved in a time capsule to be opened in the year 2060 – a history that reaches back to the American Revolution and the founding of the Town of Wellesley.

Highlights from that history can be found on the six-foot high obelisk fronting Wellesley Avenue that was donated by Wellesley Country Club right before the old clubhouse there was torn down in November 2008. The obelisk’s dedication ceremony was attended by Town officials, Club members, and long-time Wellesley residents. 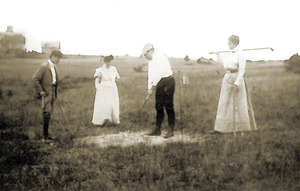 Dwight Lueth, chairman of the Wellesley Historical Commission, spoke of the importance of historic preservation and the reflection of values and care that go into buildings. He thanked the Wellesley Country Club for preserving the outline of the foundation of the building. In addition to the foundation being saved, the 1874 flooring was removed in its entirety from the second floor as well as two 1838 lunette windows, the 1874 entry newel post, and several stairs with attached railing. All are in storage until their reuse is determined.

Wellesley resident, author, and Club member Beth Hinchliffe wrote the monument’s inscriptions and also penned a history of the site titled This Splendid Acreage of Precious Space when the Club celebrated its 75th anniversary back in 1985. Her tale begins with the fateful night of April 9, 1775, when the alarm sounded of the British advance toward Lexington and Concord. The 40 or so members of the West Needham Minutemen gathered at the home of their company commander, Captain Caleb Kingsbury, before beginning their march into history.

The homestead remained in the family as a working farm until 1806 when Emily Kingsbury, a widow with no heirs, sold all 76 acres to the Town of Needham for $2,550. At that time, towns were responsible for caring for their indigent. Similar to other communities, Needham established a “poor farm” where locals in need could work the land in exchange for room and board there.

The first floor of the Kingsbury homestead became living quarters; the large gathering room on the second floor became Needham’s first official town hall. In 1838, the town demolished the original farmhouse and added a piggery, out buildings, and an almshouse–as communal housing for the poor was then called. Among the appropriations, $10 went to build a bathing-tub at the almshouse that was available to any citizen who so chose. A small pox hospital was constructed in the early 1870s as well as a lockup to detain prisoners, considered an improvement from housing them in school basements.

By this time, the surrounding area of West Needham had become quite prosperous and its citizens had submitted 15 petitions to the state legislature to form a new town separate from Needham. On October 23, 1880, citizens from West Needham packed the town hall with every available adult male, each of whom had an equal vote under the town meeting system. 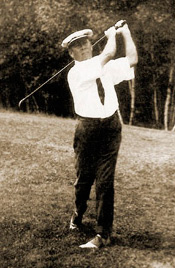 In her history, Hinchliffe writes of the “jostling elbows, muttered curses, and hot tempers” that flared past midnight as the vote passed to form the new Town of Wellesley. When leading benefactor Horatio Hunnewell later donated a new town hall and library to the growing community, the Kingsbury homestead was no longer needed for town offices or meetings. Some acreage was sold to Judge Josiah Abbott (for whom Abbott Road was named), but most of the land where the Wellesley Country Club is set today remained as a poor farm at the turn of the century.

The first game of golf played in Massachusetts was in 1892 in Wellesley. Arthur Hunnewell, the sixth child of Horatio Hunnewell, was hosting his niece Florence Boit who had just returned from Pau, France. She had learned to play golf in Europe and had brought her clubs to Wellesley, assuming there would be local courses. There were none.

Under her guidance, seven small holes were laid out on Hunnewell’s Washington Street estate. Five-inch flowerpots were sunk into the ground to serve as cups and the hazards included roads, clumps of trees, beds of rhododendrons, an aviary, and a greenhouse. Hunnewell invited friends to play all summer long.

One delighted guest petitioned his Brookline Country Club to build its own course, but only if such work would not exceed $50. It did not. Seven years later, there were 29 golf courses within a dozen miles of Boston. 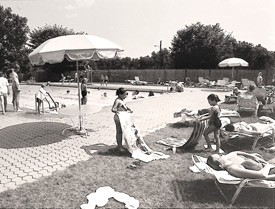 In 1897, a nine-hole course was built on the Abbott Estate, but there was no clubhouse for those calling themselves the “Wellesley Hills Golf Club.” Many of these same players joined together in June 1910 to execute a lease with the Town of Wellesley for full use of the 66 acres of the now unoccupied poor farm. The yearly lease was $300 and came with a few stipulations: Wellesley would continue to haul rock and stone from the gravel pit on site and no liquor was to be sold on the premises. Of the 33 founding members to sign for the incorporation of the newly named “Wellesley Country Club,” three were women.

The estimated cost to build a nine-hole course (designed by Donald Ross), two tennis courts, and a croquet area was $2,300. A similar amount was needed to convert the existing building into a clubhouse. The former town hall meeting space became the ballroom; the small pox hospital, the pro shop. Tennis was not popular at the time and Hinchliffe’s history notes that the courts were not kept in the best of shape – a rainstorm could put them out of commission for a week. In the winter, however, they were flooded and turned into popular ice-skating rinks.

Members were wary of investing too much in property that was leased. So in 1921, Club members banded together to buy the 66-acre parcel for $30,000. To raise the purchase price, the Club sold 250 Certificates of Ownership for $200 each. That number remained constant for 40 years and the Club still retains the certificate-owning practice with some 700 members today.

What was the Club’s first official expenditure as landowner? Eighteen small signs that read: “Replace the Turf.” That bit of history comes as no surprise to Marty Ryan, who has served as the Club’s general manager for the past 19 years. 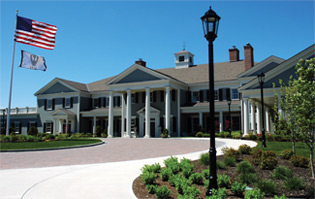 The new clubhouse has ample space to host all types of events.

“Golf is king,” Ryan said of Wellesley Country Club as he rode a cart around the property, stopping to pick up any item out of place or to say hello to employees and members he passed – each of whom he seems to know by name. This is no easy feat come summer when scores of children fill the swimming pool and run on the lawn adjacent to the patio that wraps around much of the new clubhouse. (The swimming pool was added during the post-war baby boom. The first tennis pro was hired around that same time.)

Ryan points to details such as the painted columns along the front elevation of the clubhouse that help retain the feel of the old Club, while new amenities such as the fitness room that opens at 5:00 a.m. is in keeping with modern demands. There is now ample space to host all types of events from grand weddings to regular bridge matches to charity benefits, Ryan says.

He credits Executive Chef Craig Cobb and his cooking staff for drawing members in to enjoy a full menu in the expanded dining areas that include a family section and an English-style pub nook, as well as casual seating. In the height of summer, however, Ryan says most members choose to be on the patio taking in the views of the links that have had an evolution of their own.

What started as a nine-hole course, today has 18 holes of championship quality. Some might say it was the gift of timing that the Club was founded after Coburn Haskell invented the rubber core golf ball in 1898. The more aerodynamic design traveled much farther than its predecessors, and new golf courses were designed with greater distances in mind.

In 1960, the Club was able to purchase 38.7 additional acres that abutted the Club’s land from the Academy of the Assumption. Geoffrey Cornish designed the nine additional holes and they were completed in 1961 with modifications in later years by Brian Silva (1993) and Craig Schreiner (1999). Club member Phil Fecteau currently holds the Competitive Course Record of 64.

Some of golf’s greats like Arnold Palmer have enjoyed Wellesley Country Club through the years, but none as storied as Brookline native Francis Ouimet. In 1913, Ouimet shot two rounds of 88 at the Club. One week later he became the first amateur to win the U.S. Open after a stunning 18-hole playoff against Britons Harry Vardon and Ted Ray, then considered the top two golfers in the world. Club lore claims Ouimet is to have said that he got all his bad shots out of his system the day he played at Wellesley.

Author and historian Gary Larrabee is collecting these anecdotes and more for an updated history of Wellesley Country Club focusing on the last 25 years. While Joseph E. Murray may be known to the rest of the world as the co-recipient of the 1990 Nobel Prize in Physiology or Medicine (with E. Donnall Thomas) for the discovery concerning organ and cell transplantation in the treatment of human disease, Larrabee writes of how he is most renowned at Wellesley Country Club for his smashing forehand.

Larrabee’s book will be included among the items collected during the year-long Centennial celebration being chaired by Club members Patricia Palmer and Thomas Nash. Perhaps also included will be one of the arrowheads that can still be found on occasion on the Club’s land with a recorded history that dates back to 1681 when it was purchased from Chief Magos whose tribe lived on its rolling hills and swales.

This year’s contenders played a considerably longer course than in the previous two times the Club has hosted the event. Nine of the 18 holes have been lengthened since 1999, the last time the event was here. From the black tees, golfers faced a layout of 6,903 yards. The par-70 course has a rating of 74.2 and a slope of 137. 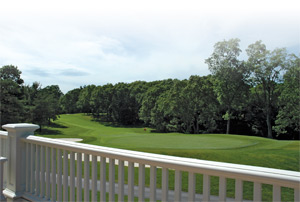 Mini-tour veteran Jimmy Hazen of Florida took home the $15,000 purse. Hazen, 28, fired a final-round, 3-under-par 67 to finish the tournament at six-under. Two favorite sons also competed in the first two rounds: former Club member D.J. Hynes and assistant golf pro Todd Anzlovar. Hynes grew up at Wellesley Country Club and was one of its junior champions. Anzlovar, who has been at the Club for three years, had to be granted special exemption to play because of his role at the host club.