Bringing Hope to Women in Afghanistan 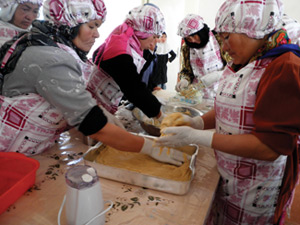 Many of us gladly support our friends who are running or cycling or walking for a cause. It’s our pleasure to prepare home-cooked meals for grieving neighbors and acquaintances feeling under the weather. We readily send non-perishable food, warm coats, and gently-used toys with our kids to school for local families in need. But do you ever question if you are doing enough to make a difference in the world?

Amy Letteney and Tricia Glass, two women from Wellesley, clearly are making the world a better place. As co-directors of Project Development at ARZU STUDIO HOPE, Amy and Trish work to help Afghan women break the vicious cycle of poverty. ARZU is a social business enterprise—a true public/private sector partnership sustained by revenues from the sales of high-end rugs and supplemented by generous donor support.

ARZU was started in 2004 by American businesswoman Connie K. Duckworth, who retired as a successful private sector financier to build a business empowering women through artisan-based employment. In 2003, Duckworth joined the U.S.-Afghan Women’s Council, a bi-partisan commission formed to insure Afghan women a voice in post-Taliban Afghanistan. Connie boarded a military cargo plane to the city of Kabul to see firsthand the hardships the women faced. There, she met desperate mothers living with their children in bombed-out buildings with no windows, heat, furniture, sanitation, and little food or clean water. On the plane home, Duckworth outlined her vision for a non-profit business she would later name ARZU — inspired by the Dari word for “hope.” 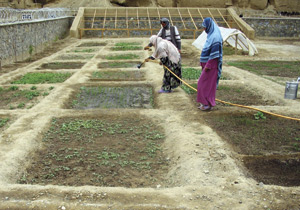 ARZU brings hope for a better future to women rug weavers and their families through education and job training, basic healthcare, and clean water. Central to ARZU’s innovative approach is their “social contract” with weaver families. ARZU pays women a 50 percent bonus over market rates. In exchange, families must agree to send all children under age 15—both girls and boys—to school full time, to allow all women in the household to attend ARZU literacy classes, and to permit ARZU to transport pregnant women and newborns to clinics for pre- and post-natal care.

After September 11, 2001, Amy and Trish were compelled to build bridges between the United States and Afghanistan. While neither woman lost a relative in the terrorist attacks, they supported a friend who did as she launched “Beyond the 11th,” an organization that raises money and awareness for the plight of Afghan widows. Through their pioneering work with Beyond the 11th, Trish and Amy were introduced to ARZU and realized that shaping local programs was the next step in their journey to improve the lives of Afghan women.

Today, Trish and Amy work with an ARZU team in the United States and Afghanistan to design facilities and programs in Bamyan Province that support the women weavers and their families. Thanks in large part to Trish and Amy, ARZU broke ground in June 2009 on the construction of a privately-funded “trio” of community facilities in Dragon Valley, including: a Women’s Community Center, a Community Garden/Greenhouse, and a Sports/Wellness Complex. As with all ARZU activities, these projects are developed with the cooperation and engagement of the local women’s and men’s “Shuras,” or Councils, and are being built with local labor. 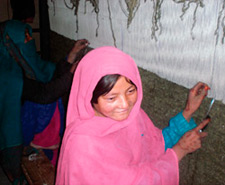 Sharifa, an ARZU weaver, working on a rug at the new Community Center.

A pivotal member on the team with Amy and Trish is Razia Jan, ARZU’s Country Program Director. In fact, Amy and Trish speak to Razia at least four times a week. Razia, who Amy calls a “force of nature,” joined ARZU in 2008 and oversees all education, healthcare, and social benefit programs in Afghanistan. Born in Afghanistan, Razia moved to Duxbury, Massachusetts in 1970 and returned to her home country in 2008. Over the years, Razia has worked to forge connections between people in the United States and Afghanistan. She began by rallying her adopted New England community to send over 400 homemade blankets to rescue workers at Ground Zero after September 11, 2001. A member of the Interfaith Council, “No Place for Hate,” and on the Board of Directors at Jordan Hospital, Razia has received many awards for her humanitarian work, including the 2007 Woman of Excellence award from Germaine Lawrence Inc.

The first ARZU facility in the trio, the Women’s Community Center, was completed in December 2009. This year-round multi-purpose compound houses a heated, indoor “laundromat” so women no longer have to wash clothes and dishes outdoors in frigid winter conditions; a tea room where women can socialize; rooms for literacy classes and meetings; a two-story loom workshop with four looms too large to fit in weaver homes; a kitchen; flush toilets; and a courtyard walled for privacy.

While affecting change across the globe has its share of challenges and frustrations, Amy and Trish’s work is hardly “nameless/faceless.” Take 25 year-old Sharifa, now an ARZU rug weaver, who escaped with her family after the Taliban killed her father and burned Sharifa’s family’s home and possessions. Too poor to flee to refugee camps in Iran or Pakistan with friends and neighbors, Sharifa, her mother, and eight siblings spent years alone destitute, often with little more than a piece of bread to eat at mealtimes. “We suffered a lot of problems,” Sharifa remembers. 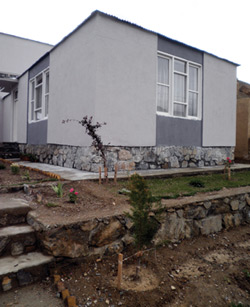 But each year since Sharifa arrived in Dragon Valley, her life has improved. Sharifa now earns a steady income plus cash bonuses for each rug she completes. With her earnings, she provides food, clothing, and other necessities for her family. Sharifa is enrolled in ARZU literacy classes and all of her family members have access to health care.

With the opening of the Community Center, Sharifa enjoys much more than the basics of employment. She collaborates with other weavers on rugs in the sunlit, two-story weaving atelier. For the first time in her life, she can gather with women outside her home to share skills and conversation. The Center’s tea room offers her and her colleagues an unprecedented space to relax, socialize, and read books from a library of donated titles. Finally, Sharifa can now wash clothing and dishes in a safe, protected space with solar-heated hot water. Access to the ARZU facility has been life changing for Sharifa and about 350 other women and their families already, with that number expected to grow to about 1,500. Trish comments, “It is amazing what we take for granted.”

In addition to offering rug weaving programs, ARZU recently launched a baking program, training women to prepare sweet and savory items to sell to ex-patriots in Bamyan longing for a Western-style muffin or baguette. The baking program also teaches women how to improve household nutrition by incorporating whole-food ingredients. Sharifa’s mother and two of her sisters are enrolled in the baking program. Having four women earning income in one household eases Sharifa’s financial burden and offers her siblings and extended family members the chance to move well beyond subsistence living. 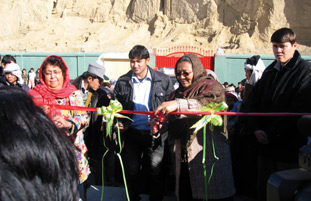 Razia Jan, ARZU’s Country Program Director, (on left) with the governor of Bamyan at the official opening of the Community Center.

Men in Bamyan Province also find employment as a result of ARZU’s local initiatives. Each phase of construction provides opportunities for new apprenticeships in carpentry, bricklaying, and general construction. While the Community Center is complete, the Garden/Greenhouse Center is under construction, soon to offer a walled co-op where women will learn best practices for soil enrichment, planting, and harvesting nutritious produce – practices women can replicate in their own family garden plots. The Center will also house poultry rearing and briquette production for women. Men will work at the Center to produce cement, sand, and gravel water filtration systems, called “biosand filters,” for use in area homes. After the completion of the Garden Center, construction will begin on the third facility in the trio, the Sports/Wellness Complex, with an outdoor soccer field and volleyball court, and an indoor recreation room with space for ping-pong and exercise and health classes.

ARZU also employs an Afghan team to work closely with weavers and their families to maintain a safe, healthy, and productive environment. Since Afghanistan is a gender-segregated society, with different cultural and tribal customs depending on region and ethnic group, local men and women serve as monitors. The health and education monitors visit weaver families weekly to ensure the children are attending school and that families are treated for any illness or injury. ARZU monitors also ensure that child labor is not employed on ARZU rugs and that weavers receive payments for their work.

Amy and Trish admit that it is hard for them not to get stymied by the enormity of the needs of the people in Bamyan Province. Afghanistan is among the poorest nations in the world, ranking 181 out of 182 of the poorest, according to the 2009 United Nations Human Development Report.  Only 17 percent of rural Afghans have access to safe water, only 25 percent to adequate sanitation, and only 6 percent to electricity according to a 2006 UNICEF report. Unemployment hovers at roughly 40 percent, due to the lack of alternative sources of livelihood in rural areas. International watch groups estimate that the illegal poppy economy fills this void and accounts for over one-half of Afghanistan’s GDP. Yet, according to the Afghan Ministry of Rural Rehabilitation & Development, the rug industry is Afghanistan’s best short-term prospect for re-establishing global trade. Carpet making provides opportunities for employment, particularly in rural areas where unemployment is so high. As Trish puts it, “The more we work, the more opportunities we see.”

left: ARZU founder Connie Duckworth and members of the ARZU team in Bamyan at the top of the Buddha caves, which are now empty after the Taliban destroyed the ancient stone sculptures. right: To learn more about ARZU, including their wonderful collection of traditional and contemporary design rugs, visit www.arzustudiohope.org/home.

And as if Amy and Trish’s work in Afghanistan isn’t enough, closer to home, Trish has served on the boards at her daughters’ schools and supports organizations that offer education opportunities to children in underserved neighborhoods, including The Steppingstone Foundation. Locally, Amy is active in planning and implementing a children’s event that supports the Pan-Mass Challenge, a bike-a-thon that has contributed over $239 million to support cancer research.

Amy Letteney and Tricia Glass inspire us all to find our philanthropic passions and embody the spirit of Margaret Mead’s famous quote: “Never doubt that a small group of thoughtful, committed people can change the world. Indeed, it is the only thing that ever has.”