Candid Conversations – Talking to Your Kids about Sex 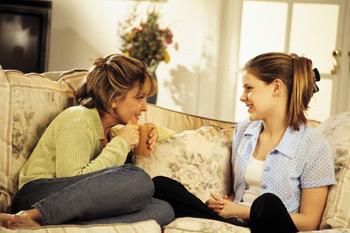 Rather than having “The Talk” with your child about sex, Corinne S. Ertel, MD, of Weston Pediatric Physicians, advises parents to engage in an ongoing dialog about being comfortable with yourself and your body.

A good place to start is to use anatomical names for body parts rather than euphemisms. “If we can talk about lungs and hearts with our children,” Ertel said, “we should be able to talk about little boys having erections without being embarrassed.” That way, when the topic moves on in later years to sexual behavior—such as being respectful and safe or the use of birth control—the language will be more natural for both parent and child.

Ertel has practiced in Weston for 27 years and now has “grand-patients” as she likes to call the babies of her patient’s children. Watching her patients grow up and mature is one of the joys of her job; but, much like parenting, can be among the most challenging during puberty when so many physical, emotional, and social changes are all happening at once.

“More than anything else, kids want to know that they’re normal,” Ertel said. Normal does not, however, mean the ‘same’ as everyone else. Growing up, and exploring one’s sexuality, is all part of the process of developing and gaining confidence in one’s unique identity. Young people clearly seek reassurance from their peers, but they also crave it from trusted adults as well, though they may not show it. It’s okay for parents to initiate these types of conversations.

“I may ask a teenage girl, for example, if there’s a particular person she likes,” Ertel says, “then I listen carefully to her answer.” A lot of the conversation around sexuality with young people is more about listening than talking. It’s about finding out what they know—or think they know, Ertel said. “The myth’s still out there that you can’t get pregnant during your period,” says Ertel, citing just one example of how young people need basic facts.

On occasion, Ertel will be asked to have the “sex talk” with a patient because the parent is uncomfortable doing so. She always agrees, but is also quick to invite the parent to join in. If the parent declines, Ertel steers her (and it usually is the mom) toward the bookshelves stocked with sex education materials for all age levels. 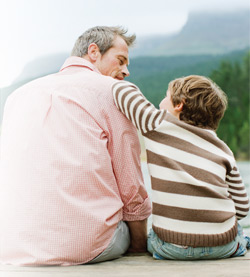 “Problems arise when parents don’t understand their own emotions or prejudices about sex,” Ertel says. “They need to rise above their own anxiety and become comfortable with the conversation.”

Becoming comfortable talking about sex with their children was precisely the goal of the three dozen or more mothers gathered in Jenny Seeman’s living room last spring. Seeman, who has four children under the age of 12, volunteered to host a Planned Parenthood League of Massachusetts “Home Talk” presentation at her home in Weston. While geared toward mothers of middle school girls, the facilitator from Planned Parenthood fielded questions about issues facing girls of all ages.

“No one wanted to leave, even though it was time to go pick up our kids,” Seeman said of the daytime event. Weston resident Jodi Goldstein hosted a similar presentation weeks later geared toward the mothers of boys. (See sidebar: Best Time to Start Talking with Kids about Sex?)

Seeman described herself as a private person and that talking about sex with her kids “has not been the easiest subject for me.” But she grabs “teachable moments” when they arise, like when the family rabbit was taken to the vet to be neutered several years back. The kids asked what “neutered” meant.

“I hadn’t planned a big talk, but in two minutes I explained how babies were made,” Seeman says. While brief, she made sure to end on the note that if they had any questions, they could come to her any time.

And that can be a challenge, said Janice Tuckman, LICSW, a chief social worker at Human Relations Service, Inc. in Wellesley Hills. HRS is a non-profit mental health agency serving families and children in Wellesley, Weston, and Wayland.

As parents begin to answer a child’s question, they need to constantly check in as to how much that child actually wants to know. Tuckman recounted the classic story of the child who asks, “Where do I come from?” After his mom gives a long and very detailed explanation of how babies are made, he replies, “I meant Johnny is from Chicago. Where do I come from?”

Parents also need to recognize that times have changed from when they were young. “Being a sophomore at Wellesley High School in 2010 carries very different challenges,” Tuckman says, than in years past. Rather than casting judgment or laying down edicts, Tuckman advises treating difficult situations as genuine dilemmas that young people face today, whether it’s provocative clothing, electronic social networking, or “friends with benefits.” Tuckman suggests working through the issues with your child.

Parents shouldn’t be afraid, however, to share their own values about the consequences of certain behaviors such as “hooking up”—to use the lingo du jour. “It’s okay to say: ‘I’m not so sure you’ll feel good about yourself if you do.‘“ Say what you believe and then listen to the child’s response. Tuckman stresses the importance of really listening and to keep asking questions.

A common complaint among parents is inappropriate sexual content of television shows their children seem so desperate to watch. Rather than making shows like Gossip Girl or Glee off-limits (which only heightens their appeal) or “giving in” and letting them watch unsupervised, Tuckman recommends watching the show together.

Serial shows with complex teen relationships often provide good starting points to talk about difficult situations that do not directly involve the child or his or her friends. “It can become more of a conversation about values and choices in less personal terms,” Tuckman says. These “what if” conversations help the child develop his or her own code of behavior which, ultimately, is the one that really matters.

Tuckman believes that when parents do a lot less lecturing and a lot more listening, they may be surprised by how much their children do choose to share with them and how the parents’ values factor into their decision making—even if they don’t show it. Parents may even hear more than they were expecting to hear, like permission to get birth control or attend a co-ed weekend away.

“That’s great that they’re asking,” Tuckman says, but it’s also okay to take time to think through your answer. “Say: ‘Thanks for sharing this with me—I really want to respond. Let’s talk again tomorrow.’” Talk over your values and concerns with your partner or trusted friend and be open to hearing about the realities young people are facing in the world today. And then pick up the conversation where you left off, Tuckman says. It is a conversation that will deepen over time when given the chance.

Best Time to Start Talking with Kids about Sex?

It’s best to start as soon as children begin getting sexual messages. And they start getting them as soon as they’re born. Children learn how to think and feel about their bodies and their sexual behavior from things we do and say—from the way we hold them, talk to them, dress them, teach them the words for their body parts, give them feedback on their behavior, and behave in their presence.

But don’t worry if you haven’t started yet. It’s never too late. Just don’t try to “catch up” all at once. The most important thing is to be open and available whenever a child wants to talk.

Some Conversation Starters
Sometimes asking your child a question is a great way to open up a conversation. Here are a few questions you might ask:

Preteens
• People change a lot during puberty. What have you heard about the changes of puberty? How do you feel about going through puberty?
• At what age do you think a person should start dating? Have any of your friends started dating?
• Do you think girls and boys are treated differently? (If yes …) How?

Reprinted with permission from Planned Parenthood Federation of America.

For more information on this topic, visit: www.pplm.org/education.