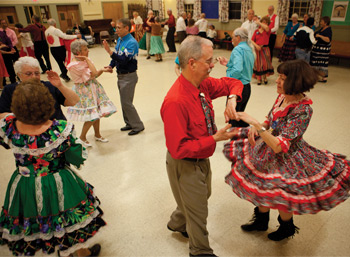 When their youngest was a junior at Wellesley High School, Marianne and David Laffitte began anticipating their lives as empty nesters. “We needed something as a couple—we needed a date night,” Marianne recalls. So after a 17-year hiatus, they began dancing again with the Natick-Wellesley Square Riggers in 2008. They were elected co-presidents this past spring.

Established in 1965, the Square Riggers is one of the oldest, continuously running clubs in the area dedicated to preserving traditional round and square dancing. The club offers weekly classes for beginners and advanced levels at The First Baptist Church in Natick and hosts a monthly dance at the First Parish of Westwood.

“If you can walk, you can square dance,” Marianne says, but it still challenges your musical and mental skills. “As an engineer, my husband found square dancing fit his personality. David enjoys thinking of the patterns…and approaches dancing technically.”

Round dancing is “choreographed ballroom” in which the steps (or “figures”) are called out by a “cuer.” Typical rhythms that might be cued at dances are the waltz, rumba, two-step, cha-cha, and fox-trot, and the music can be just as varied. 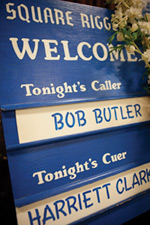 The same holds true for square dancing. The music can be anything from Michael Jackson to Jimmy Buffet. “As long as the rhythm is correct, it can be used for dancing,” Marianne says, adding that she enjoys all varieties of music from show tunes to rock to traditional country and western.

One does not have to be an experienced dancer to get started in either style. “A lot of men, in particular, will beg off by saying they have ‘two left feet,’” Marianne says. She’ll counter that, unlike traditional dancing, men do not have to lead in square dancing. Rather, the steps are called out for all to follow. Although the man is supposed to lead in round dancing, Marianne says that “David and I have agreed that I will lead, and I don’t think that is uncommon.”

No matter where you go in the world, square dancing is always called in English and the steps are the same. What does change, however, is the level of difficulty. All newcomers start off at the “class” level and progress through a year-long series before graduating to “mainstream.” There are eight more levels after that, going all the way up to Challenge 4.

The level of a dance is always publicized ahead of time. While those farther along can dance at the levels below them, it is not considered proper etiquette to join in beyond one’s skill level. Not knowing the steps can result in the square breaking down. To be as inclusive as possible, most Square Riggers dances are class, mainstream, or Plus level.

“Many people are surprised to learn that at club dances, the style alternates between square dancing and round dancing,” Marianne says. Like the Laffittes, most couples start with one style and then, over time, learn the other. 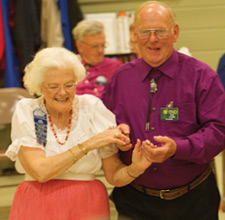 An American Tradition with Local Roots

In 1982, President Ronald Reagan signed an act declaring square dance the country’s “official national folk dance.” Its roots can be traced back to the original New England settlers who brought with them the popular dances of their native countries, such as the schottische (Bohemia), the quadrille and minuet (France), the jig (England), and reel (Scotland) to name a few. After toiling all week, they would gather in the community center on Saturday evening to dance their old-world favorites.

As the community grew, so did its repertoire. It became increasingly difficult for the average person to remember all the different steps and the role of the figure caller emerged. Usually outgoing by nature, the caller was someone who knew the various figures and could prompt others to keep in sync with the music, sprinkling in colorful sayings—or “patter.” Callers often taught the dances of other communities or developed dances and routines of their own involving groups of four couples; hence the name ‘square’ dancing. 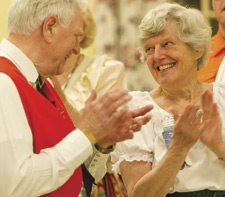 As the population spread southward and westward, so did the dances — at first. Newer dances introduced in populated areas started to phase out square dancing, except in the more isolated areas. By the 1930s, differences among regional dances were so pronounced that a square dancer from one rural community often would not be able to dance in another.

But a twist of fate at the Wayside Inn in Sudbury changed the course of square dancing in America. The inn was a favorite vacation spot of Henry Ford and his wife Clara. The couple so enjoyed the inn’s dance program of squares and rounds led by Benjamin Lovett that they invited Lovett to come teach in Detroit. Lovett declined, however, because he was under contract. According to the history on the inn’s Web site: “Ford solved that problem by buying the inn and Lovett’s contract.”

To Detroit Lovett went. Together, he and Ford established a program for teaching squares and rounds that included radio broadcasts and lessons for schools. More and more figures were introduced for square dancing; similarly, more round dances were choreographed for couples. Its popularity spread and new groups began forming around the country for decades to come, such as the Fairs ‘n Squares in Framingham in 1962, the Square Riggers in 1965, and the Great Plain Squares in Needham in 1974.

Today, there are local, regional, and even international dance federations that support clubs and host conventions. Many groups maintain archives, like the Mid-Atlantic Challenge Association from which much of the above historical information was culled. Indeed, one of David Laffitte’s tasks as a new co-president is to ferry boxes filled with decades of Square Riggers flyers, photos, and other memorabilia up to archives of the Square Dance Foundation of New England in Manchester, New Hampshire.

The Square Riggers have around 50 paying members, most of whom take turns shouldering the administrative tasks necessary to keep the nonprofit group running smoothly. Jack and Jill Whiting of Wellesley—who have traveled the world attending dances and conventions—currently oversee the club’s Banner Raids. Others pitch in on dance committees, refreshments, and board meetings.

Gibson said the club is open to all ages and is a great way to make new friends, especially if you’ve just moved to the area. She enjoyed sharing how Ed and Laurie Snead, who now serve as class advisors, fell in love as a result of square dancing. They were co-workers when they decided to partner up and give square dancing a try. During the course of that first year of lessons, a romance bloomed and they got engaged. “They even had a square dance wedding,” Gibson says.

Gibson began dancing with her husband, Duncan, in the early 1990s when the Square Riggers met in the basement of the Village Congregational Church in Wellesley center.
“My husband went reluctantly,” Phyllis recalls, but was soon won over by the warmth of the community. They danced happily to­gether for the next few years.

It was this same close-knit community that embraced Phyllis after Duncan passed away, bringing food and keeping her company. When the time felt right, club members encouraged her to continue dancing, promising to find partners for her.

Keeping with the square dance culture of kindness and welcoming all into the fold, “regular” club members took turns sitting out, so Phyllis — and other single women in attendance — could dance with their partners. It is also not uncommon for women to volunteer to dance the man’s part when there is an imbalance in numbers. 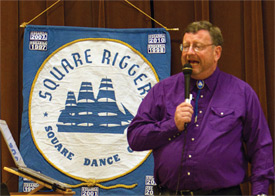 And then there’s the fun of connecting with other clubs in the area through the tradition of ‘raids’ or ‘retrievals’ in which one club, Gibson explained, “will descend upon the dance of another club.” Each club tries to outdo the other in terms of food, decorations, and numbers in attendance. “The Square Riggers are known for our excellent refreshments,” Gibson says, and for the skill of their experienced caller Bob Butler.

Dances typically cost $6.00 and no special outfits are required, though many enjoy dressing up. Some couples match men’s shirts with women’s dresses and there are special dancing shoes for those who want them.

“It’s affordable, fun, and it’s great exercise,” Gibson says. A club brochure titled Are You Tired of Being a Couch Potato? noted that one hour of square dancing is equivalent to running two miles.

“Nobody expects perfection. You just need to give it time and put effort into it,” Gibson says. She encourages those who are curious to attend a dance and “if it looks like fun, join us.”