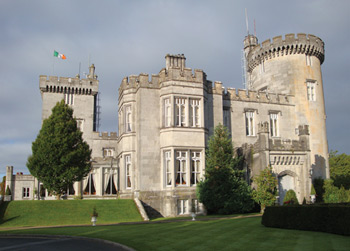 Over 40 million Americans, including many Wellesley and Weston residents, claim Irish descent. These sons and daughters of Erin are cordially invited by their native land to follow President Obama’s lead and return for a visit. And please bring friends!

With its dismal economic climate, tourism remains one of the few bright spots on the horizon for Ireland. For the tourist, a trip to the isle across the sea, with its storybook castles, rugged coastline, dazzling emerald countryside, and lively cities, is still magical. And the laid-back Irishman – with a twinkle in his eye and a story on his lips – will warm the heart of any traveler.

The west and south of this compact country are peppered with ancient castles – some hollow ruins, but others converted into luxurious accommodations for visitors. The most famous of the former is Blarney Castle in County Cork. This 600-year-old collection of stone towers and parapets also boasts lovely gardens for strolling. The castle is most famous, though, for the Blarney Stone. If you kiss it you will purportedly be blessed with the gift of eloquence. The gift doesn’t come easy, though. The stone is set into the highest battlement and, to access it, one must lean over backwards – held by a guide – and deliver the kiss hanging over the edge. 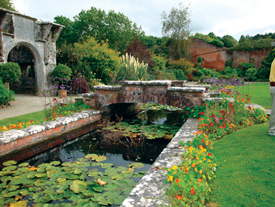 For an unparalleled stay in a castle, Dromoland Castle in County Clare has been pampering paying guests since 1840. Originally built in 1740 as the ancestral seat of the O’Brien clan, Dromoland offers everything a fairytale castle should: turrets and towers, a walled rose garden, a hedge tunnel (where barons and their ladies would meet in secret), a lake for perch and trout fishing, acres of manicured lawns, falconry with Harris hawks, opulent gold and red interiors with overstuffed sofas, mounted elks’ heads, and mural-sized oils; and perhaps the best of all: a full Irish breakfast to welcome the day.

The west of Ireland features a rugged coastline that can drop dramatically to the sea or gently kiss the shoreline. Perhaps the most famous attraction is The Cliffs of Moher in County Clare. Carved through many eons, the Cliffs, much like the Grand Canyon, consist of ascending layers of mudstone, shale, sandstone, and limestone topped by grassy moss. Stretching into the sea, they feature hair-raising drops as well as a home for nesting cliff seabirds. Here, you might spot the much-loved Puffin. The Atlantic Edge Exhibit at the interpretive center provides engaging commentary. 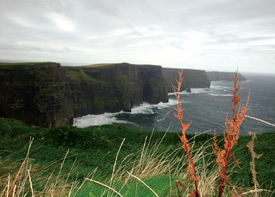 The Cliffs of Moher, County Clare

Further south, The Burren (whose name also graces a popular Somerville pub) offers sparse and lonely beauty by the shore. Translating to “a stony place,” the Burren is a flat terrain of porous limestone by the sea, covering a network of underground rivers and caves. Fissures in the limestone allow for varieties of orchids to poke through. The Burren also claims the oldest curiosity in Ireland: Poulnabrone. This primitive rock structure – discovered to be a burial and ceremonial chamber – is older than the pyramids and has been dated to 3000 B.C. Reminiscent of Stonehenge, it consists of two tall “portal” stones with a flat “capstone” roof, tilted upwards towards the heavens.

In County Kerry, the Ring of Kerry is a shoreline route circling a peninsula of mountains and lakes descending through bog land to the sea. Popular beaches are strung around the ring like beads, with many wonders to explore in between. These include the beautiful Dingle Bay, the Butler Arms Hotel (a favorite of Charlie Chaplin), Skellig Michael (a rock island that was once a monastic community), the Gap of Dunloe mountain pass, Kells Sheep Centre(where farmer Brendan Ferris and his border collies put on a smashing sheep-herding show), and the colorful town of Sneem (where the buildings are painted in rainbow hues, and you can hoist a stein at bright-pink Dan Murphy’s Bar). 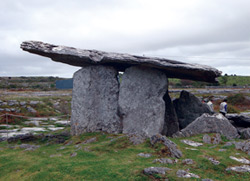 Poulnabrone, on The Burren

For Irish linen or lace, shop in nearby Killarney at Blarney Woollen Mills.

If you’re adventurous enough to drive on the left-hand side (alternatively, you can travel by bus tour or Irish Rail), Ireland’s country roads in the south and west are generally light on traffic and long on the lush green scenery Hollywood has showcased in movies such asRyan’s Daughter. Inland from the coast, the lawns and pasturelands are – just as advertised – a vibrant emerald, and provide a dazzling backdrop to yellow-flowering gorse bushes or hot-pink wildflowers. Horses, sheep, and cows graze by the roadside, while rolls of hay, ready for winter use, dot the verdant farmland. In this romantic setting, it is not surprising that the County Clare town of Lisdoonvarna has become known for an unusual annual event: a match-making festival. 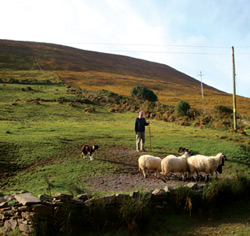 Sheparding at The Ring of Kerry in County Kerry

In Dublin’s fair city, where the girls are so pretty, sits a modern capital, buzzing with youthful energy. Students at Trinity College,in the heart of Dublin, spill over everywhere (more than 50 percent of the city is under age 28). The lovely college green welcomes 500,000 tourists each year to a major sightseeing attraction in the campus library: The Book of Kells. This illuminated manuscript of the four gospels in Latin is a 9th century masterpiece of early Christian art. Just south of the college, at the National Library of Ireland, awaits another treasure for the traveler: a recording of the late William Butler Yeats reciting his own poetry.

Adjacent to the Trinity campus is a bronze statue of Molly Malone, herself – the familiar heroine known to schoolchildren everywhere. She wheels her wheelbarrow at the entrance to one of the most vibrant parts of town: Grafton Street. This all-pedestrian way bustles with seven blocks of premier shops, cafes, vendors, and street buskers. It’s Newbury Street with no autos, and with its hair let down. “Must sees” on Grafton Street include Bewley’s Oriental Café, known since 1927 for its fresh-ground brew and velvet banquettes; Brown Thomas, the Saks of Ireland; Dubray Books, the country’s leading independent bookseller; and Butler’s Chocolate Café, for signature Irish candies and cocoa. Free street entertainment abounds, from young classical violinists, to sand sculptors carving works on the sidewalk, to mimes painted silver from head toe. 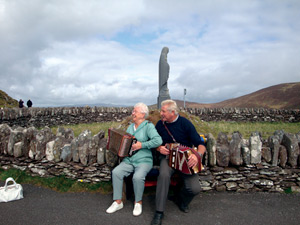 The Ring of Kerry in County Kerry

St. Stephen’s Green, a shady park at Grafton Street’s south end, offers respite for the weary. Its 22 acres of manicured gardens feature weeping trees draping into placid ponds and riots of bright blooms overflowing their flower beds. The designers of this oasis even included a Garden for the Blindwith scented plants suitable for handling.

Any Dublin day should properly close at a pub, and the choices are endless. In Temple Bar, the artsy section of town, there is Cassidy’sand Foggy Dew, while the university area features The Dukeand O’Neill’s. The latter offers a tasty turkey and roast-beef carvery, and traditional Irish flute-and-pipe music. Whatever the choice, one more Gaelic ritual remains to round out the authentic Dublin experience: downing a pint of Guinness!

Diane Speare Triant is a writer in Wellesley Hills.