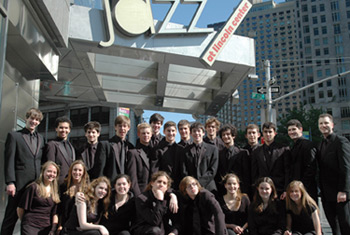 On the third floor of Wellesley High School, all the way down the hall at the very end, you’ll find the Band Room. “I have friends who say that they have gone to school here for four years, and they have never set foot in here,” says Mae Capozzi, a senior. Yet for the 25 students who make up the 2 O’Clock Jazz Band, this is the space in which they have cemented their reputation. Through the relentless dedication of band director Steve Scott and through the talent and work ethic of the students, they are widely recognized as one of the top jazz bands in the United States.

Wellesley High School is used to modestly acknowledging its powerhouse status among suburban high schools. It consistently ranks among the top schools in the state and often across the country. It sends its students to blue chip colleges and universities. Its athletes compete at a consistently high level across a dizzying array of sports. Yet this area of musical achievement flies a bit under the radar.

“They are among the best in the country and are at the top of their game,” says Joanna Massey, Director of Education at Jazz at Lincoln Center, a venue where the Jazz Band recently performed. The 2 O’Clock Jazz Band recently returned from the Essentially Ellington High School Jazz Band Competition & Festival where their selection was especially remarkable because their prior attendance put them in the most competitive category. “Only 15 bands get into Ellington anyway but only 5 can be asked back two years in a row, and we were in that category,” says Beth Perry, director of Performing Arts for the Wellesley school system. “We also attended the Charles Mingus Festival this year. We were the only band in the country to make it into both,” she adds. To some, the achievements of the Jazz Band may seem to have burst forth fully formed, but the reality is that their stratospheric accomplishments have their basis in a number of support systems and programs spread throughout the school system and the wider community. When asked why the Jazz Band is so exceptional, WHS Principal Andrew Keough answered aptly, “There are many reasons, actually.” And according to all involved, he is exactly right. The Jazz Band has its roots going back all the way to the fourth grade when students start in band. Orchestra starts even younger — in third grade. Individual lessons reinforce what’s learned at school. Six hundred students take them. Students get their first taste of jazz band in the middle school.

The 2 O’Clock Jazz Band at the 2011 Massachusetts Association for Jazz Education (MAJE) finals.

Henry Platt is a respected music educator at the middle school whose encouragement of burgeoning players instills a deep love of the jazz genre. “There is no question that we could not be reaching the levels of success that we are here at the high school if it were not for the incredible work that is happening all the way from the beginning,” says Steve Scott. “The students come to me with a love of jazz and the experience of playing jazz. I am so grateful for the work that the educators do before me.” Jazz Band members agree. “Students start so young here in Wellesley. It’s a great program,” says Callen Raveret, a junior who plays the trumpet and started playing music in New York.

In an era when art and music seem to be perpetually fighting for a place at the school lunch table, Wellesley is seen as a town that defends its programs. The community typically puts a premium on securing these “extras,” recognizing their potential for adding depth and dimension to a student’s academic workload. “In Wellesley, parents are excited about the arts, they value it, they see it as important to their child’s education. They go to school committee hearings…and stand up and will advocate for us,” says Beth Perry. 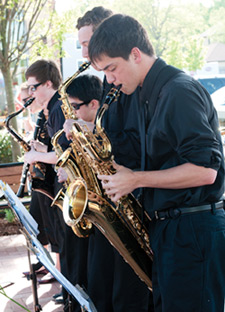 The 2 O’Clock Jazz Band was the only band in the country to make it into both the Essentially Ellington High School Jazz Band Competition and Festival and the Charles Mingus Festival.

This support translates into an eye-popping number of participants in the performing arts at the high school level. Approx­­imately 120 students participated in the 2010 production of Chicago.Twenty percent of students participate in some sort of singing, instrumental, or drama group. WHS offers students 20 different performing arts groups in which to participate, with many students belonging to more than one ensemble. In addition, students often play or sing in a musical group andplay on a sports team. Callen Raveret, for instance, is the captain of the football and wrestling teams. Interdepartmental co­operation makes this juggling act possible. “More than half of the 2 O’Clock Jazz Band plays on a team,” says Steve Scott. “We can no longer lay claim to kids and say ‘these are sports kids and these are band kids.’ Coaches are very supportive and we find a way to make it work.”

The freedom to “make it work” from the community and within the high school means that 2 O’Clock Jazz Band members get the profound luxury of exploring and making music at the very highest level. The band’s energy is sparked by the fierce loyalty and cooperation among band members which contributes to the tight, fluid style which is their signature sound. “We operate as our own little community — we may not get all the great hype that the football team does but we know we are doing it for ourselves and for each other and for the music. Making music together is what we love,” says Jonathan Ceru, a senior who plays guitar.

Engendering the love of music in a bunch of sleepy-eyed teenagers (Jazz Band meets three times each seven days at 7:30 am) requires a carrot and a stick, props that band director Steve Scott metaphorically carries with him at all times. “He doesn’t let anyone fall by the wayside,” observes Mae Capozzi, a piano player. “He will tell you exactly what you need to do to make it right. It may be hard and stressful in the moment but it makes us grow as musicians and as people.” Learning jazz means learning the larger oeuvre from all possible perspectives. “Steve Scott and Henry Platt are so wrapped up in that idiom and genre,” says Beth Perry. “I hear them say ‘go get such and such CD and listen to so and so.’ They teach the kids the language of jazz.” Their infectious zeal for jazz has transformed the uncertain possibility of attending Essentially Ellington into a reality for the past four years.

The experience is transforming. “It was one of the best experiences we’ve ever had in our whole lives,” said Anne Stewart, a junior who plays trombone. In fact, the rush of performing at Lincoln Center, the chance to talk with and learn from the program director Wynton Marsalis, and connecting with other bands around the country is still impacting the band members. “After Ellington, we are still sharing music and still sharing ideas. We are still motivated and inspired by the experience,” says Monica Roberts, a senior who plays trumpet.

The 2 O’Clock Jazz Band at a past perfromance of the Essentially Ellington High School Jazz Band Competition & Festival.

Beth Perry says that the experience boosts confidence, teamwork, and self expression, traits that will serve these students well into the future: “I think that kids who have played in front of Wynton Marsalis at Lincoln Center will have no trouble later in life getting up in front of a bunch of Board of Directors.”

Jonathan Ceru may have the last word on the experience: “When you are immersed in the language of the jazz, your whole perspective changes. Your mind starts to think differently about the music. You start to understand the music at a higher level. You come back from New York City and, without trying, you’ve improved. You’re able to speak through your instrument more fluidly and on the emotional level of Ellington. It just feeds your soul.”