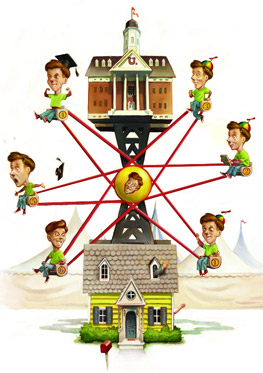 Children moving back to their parent’s home after college is not a new phenomenon, but the growing acknowledgment of and interest in this trend is relatively new. This group of young people, creatively named “Boomerangers,” a label derived from the nickname for their parent’s generation, (the “Baby Boomers”), seems to be all over the news at the moment. Now entire books are devoted to the theme, and one I recommend highly is Boomerang Nation: How to Survive Living with your Parents…the Second Time Around, by Elina Furman, (Fireside, 2005). For some, the choice is made only after exhausting all other options, while for others, it’s understood that they will come home for at least some period of time before venturing out on their own.

According to Furman, college graduates who move back into their childhood home today will find that the stigma has all but disappeared. What used to be seen as an embarrassing and socially un-acceptable option is now a commonly accepted life passage. According to U.S. Census figures, currently more than 25 percent of Americans ages 18 to 34 live with their parents. Why the attitude change? As a young adult living with my mother, I feel that I have a pretty good handle on the so-called Boomerangers. I may not have graduated from college yet, but the experiences I’ve had since returning to my childhood home, and recent conversations I’ve had with my peers, have given me some insight into why more and more young adults are flocking back to the nest.

Financial considerations are among the most obvious reasons for moving back home. Even kids whose parents can afford to put them through college tend to graduate with some amount of debt. This debt burden is especially heavy when you consider that in today’s economic climate, recent graduates are finding it very difficult to earn salaries that support the comfortable lifestyle to which they have become accustomed. What’s more, many young adults today are looking for more than just competitive salaries; these socially-conscious individuals crave work experiences that will enable them to make a difference in the world and, unfortunately, those jobs usually don’t pay very well.

The financial picture for young adults becomes even cloudier when you consider the region where some have chosen to live. It should come as no surprise that according to the 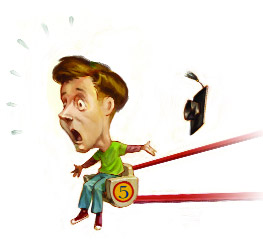 National Low Income Housing Coalition, Massachusetts is the third least affordable state in which to live, behind California and Hawaii. And according to the Boston Foundation’s third annual Housing Report Card released in September, 2005, “Greater Boston has become the most expensive metropolitan area in the United States with high housing costs playing a significant part in that development.”

So like it or not, kids are returning home to live with their parents. Living in a place with little or no monthly rent provides a needed financial break. Graduates can pay off credit card debt, start paying down student loans, and begin to build up a bit of a savings account. But that’s not to say they should be given a free ride. Most experts agree that parents of young adults returning home should consider drafting some sort of financial agreement. The idea is to help them out, not let them eat up your retirement funds.

Another major reason kids are moving back home, and one to which I can certainly relate, is the relationship that many people of my generation have with their parents. Parents these days are aging Boomers, children of the ‘60s and ‘70s who, unlike their parents before them, are much more than disciplinary figures. Parents now walk a fine line between being seen as benevolent authorities and actual friends, sometimes best friends. In an effort to be seen as peers, parents have opened the door to sharing their homes with their grown children not so much as a family unit, but as roommates of sorts.

What do Boomerangers in Wellesley and Weston think? I managed to track down three college graduates and convinced them to tell me about their experiences (a task that turned out to be more difficult than I had imagined). Contrary to Furman’s findings, there still seems to be a lingering stigma surrounding those who move home, and many individuals were less than eager to share their experiences with me. As one Boomeranger put it, “the cultural norm is that [college graduation] is the point where you start to make it on your own.” While all three of the guys that I talked to are happy and confident in the decision they made, they admit that living at home can be hard.

The first Boomeranger is a 2003 graduate of Lake Forest College with a degree in Studio Art. The younger of two children, his parents already had experience with a child returning to the nest; his sister returned home briefly after college before heading out on her own. Without a definite career goal after graduation, he returned home with the understanding that he could stay until he found a job that gave him the financial stability he needed to live on his own. After two years and a few months, he moved out last summer. His move started with a stay in a room vacated by a roommate in a friend’s apartment, and ended with a full-time job in a framing shop in Cambridge. He is quick to say that his time at home was worthwhile and enjoyable for the most part, but says that it would take fairly extreme circumstances to move home again. “I would be open to it,” he says, “but I hope that I am never in a financial position that makes it necessary.”

The second Boomeranger with whom I spoke graduated from Wheaton College in 2004 with a degree in landscape design, then went directly to Conway School of Landscape for a master’s degree, and returned last June to live at home. As an only child, his parents were more than willing to take him back into their house after graduate school. As he puts it, “my mom would be overjoyed if I stayed forever.” Their agreement (created by him) was that he would stay until he found a full-time job that made it feasible for him to live on his own, and he would pay his parents a monthly fee to cover incidental expenses. While certainly less expensive than paying rent for an apartment, chipping in for household expenses makes him feel like less of a child, and more like an adult sharing a home with other adults: “My parents are so willing to help me out, I like to feel as if I’m contributing what I can.”

The third of the Boomerangers graduated from the University of Vermont in 2003 with a degree in international business. Bilingual, he decided to take a job as a financial analyst in Argentina after graduation. After spending a year in South America, he returned to the Boston area to pursue job opportunities closer to home. His decision to move home was mostly influenced by two factors. First, instead of renting an apartment for five years and having nothing to show for it in the end, he preferred to live at home and apply the rent money towards buying a condominium or a house. The second reason for his decision was his parents’ recent divorce. It made a lot of sense for him to move in with his mother, which allowed her to have help around the house, and gave him a chance to save some money. It’s definitely not the same as it used to be, however. “Once you graduate from college and come home, it’s not like when you were in high school; I feel like I’m more in her space than in my house.”

For these three graduates, boomeranging back to the nest has been an ultimately positive decision. As in any family home, there are ups and downs, and freedom can be limited in ways that are frustrating to a young adult, but it’s a needed financial breather before plunging into the wild world of economic reality. It’s a decision that I imagine myself making next June. But I will definitely take the advice of one Boomeranger to heart: “Don’t get too used to it.”