The Game Of Life 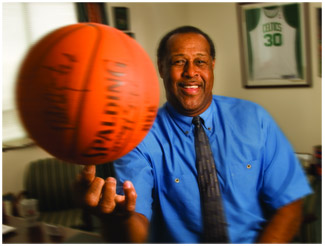 Four thousand excited Alabama middle school students waited anxiously in the gym of a local college this past April. Hoots and hollers filled the air as up-and-coming country singer Shannon Brown graced the stage. After the music, came the questions—a live interview about the singer’s life, her challenges and how she faced them.
Her message? You can overcome whatever is thrown your way. The result? Maybe some sixth, seventh and eighth graders went home feeling not so alone, realizing that even superstars deal with difficult issues.

The man behind the curtain who helped orchestrate this music lesson is Michael Leon Carr (M.L. to all who know him), former Boston Celtic superstar and present-day humanitarian extraordinaire. Through his efforts, he’s bridging the gap between children and parents, and doing it by reaching for the stars……literally.

Carr is the founder of WARM2Kids, an online resource for parents and kids, and a charitable foundation that supports youth education and mentoring programs nationwide, delivering celebrities from the spotlight and into kids’ proverbial backyards as role models. The name says it all—an acronym for We’re All Role Models to Kids.

He’s a North Carolina native, but we in the Boston area have come to think of Carr as our own. Not too many 30-somethings in Massachusetts can forget #30, now 55 years old, on the courts of the Boston Garden during his seasons with the Celts from 1979 to 1985, where he contributed to two NBA titles (’81 and ’84). After his retirement as a player in 1985, he moved into the front office, as the Director of Community Relations and later coached the Celtics for two seasons (’95-’97).

Those same children of the ’80s might also remember this 6’6” presence dominating another court closer to home…… their schools. During the late ’80s, Carr spoke to thousands of young people at numerous school assemblies through the Stand Tall Against Drugs campaign, encouraging them to “keep the lines of communication open with their families” when faced with problems.

Carr expanded those efforts by writing three influential books, Don’t Be Denied, Enough is Enough and Winning Through Persistence, and eventually founded WARM2Kids in 2002.
Once the pursuer of publicists to the top stars, WARM2Kids is now the one pursued. Celebrities like Jason Biggs, Tim McGraw, Mia Hamm, Dee Brown and Larry Bird are eager to help out, from online interviews and message boards to visiting schools, and a few even hosting large get-togethers such as the Shannon Brown show. WARM2Kids keeps striving for more, with hopes of eventually attracting celebrity giants including Oprah, Katie Couric and Jay Leno. And you had better believe Carr won’t give up until they say “yes.”
Carr still keeps his eye on the ball, as one of the investor-owners of the Charlotte Bobcats basketball team, something he considers more relaxing than the coaching and player positions he has seen with the NBA. Although he occasionally returns to North Carolina, he and his wife Sylvia have called Weston home since 1979. Keeping it a family affair, their three adult children call Carr “boss,” as Michael, Janine and Andrea all work at WARM2Kids with their dad.

WellesleyWeston Magazine talked to this gracious, charitable man about growing up in rural North Carolina pre-integration, tackling violence, eliminating “silent suffering” of kids and choosing his own role models.

WW: The groups you work with today talk about being a winner. What was your experience being on a winning team like the Celtics?
M.L. Carr: I was very fortunate. I got to play with arguably the greatest professional sports franchise in history. The common denominator in that was Red Auerbach. He used to speak about winning period, not just in sports, but in life. He took different people, from different backgrounds and made them come together as a team—Kevin McHale, Danny Ainge, Larry Bird, Robert Parish, Cedric Maxwell, myself. He said there’s a reason the Celtics’ name is on the front of the jersey and the player’s name is on the back. Because the team comes first.

WW: There was such an electric feeling with the Celtics in the ’80s. They knew they were winners.
MLC: Some people go out and hope to win. We went out and expected it. And when we didn’t win, it was a surprise. We set the bar very high, and it was already set very high by people like “Cooze” (Bob Cousy) and (John) Havlicek. Winning became part of the culture here.

WW: You used this excitement around the Celtics to reach out to kids, like your collaboration with Bank of Boston on
the “M.L. Carr Challenge–Stand Tall Against Drugs.”
MLC: I would go into the schools and use the Celtics and my sports celebrity status as a prop. Kids would open up and ask me all these questions when I was in front of them. How tall are you? What’s it like playing with Larry Bird? But then when I would leave, and the teachers would have them write letters thanking me, that’s when I got the tough questions. The anonymity of the letter allowed them to open up. And that became the genesis of WARM2Kids.

WW: How did WARM2Kids grow?
MLC: As I got further away from basketball fame, my concern for kids didn’t diminish a bit, but people didn’t know who I was anymore (laughs). So I decided to get celebrities from all different backgrounds, and that’s how we started WARM2Kids.

WW: The very name of WARM2Kids is an important message—we’re all role models.
MLC: We’re here to inform, instruct and inspire young people to make positive life decisions. Whatever they’re going through… whether it’s anxiety, depression, relationships, acne, someone has been through it. That’s why we bring in celebrities to talk about their lives, their setbacks, and how did they deal with them. 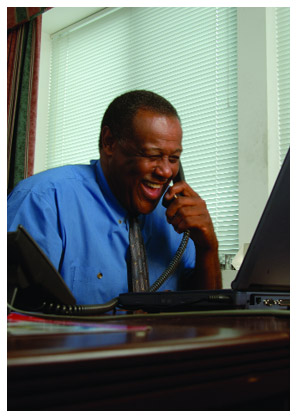 WW: Are parents involved?
MLC: We have to tell kids not to be afraid to ask for help, but adults are sometimes the hardest. They feel like they have to carry the entire world on their shoulders, and they feel that it’s a weakness if they ask for help. Somewhere along the line, we all need help. WARM2Kids connects the different groups.

WW: There are many controversies surrounding sports—player strikes, steroids, violence. What do you believe is the responsibility of sports figures as role models?
MLC: It’s not a right to perform as an athlete; it’s a privilege. And with that comes responsibility. Sometimes we fall short. We let fame and fortune get to us, and we feel entitled to do certain things. There’s an obligation, and we should hold athletes to that standard.

WW: Who are your role models?
MLC: My No. 1 role model is very clear—my father. He was an incredible guy. He had a third grade education, but he was almost a genius because he knew how to deal with people. You felt special every day you were around him.
Another role model is “Pistol Pete” Maravich because he taught me to be a basketball player. I fell in love with the game because he pulled me aside at camp as a kid growing up. Dr. King was also a role model for me because he wasn’t afraid to take on challenges. No matter what the cause, he was prepared to pay the price.

WW: What was it like to win the Martin Luther King Jr. Image Award?
MLC: It was an incredible honor. The Image Award was very vivid because it wasn’t something I read about, it was something I lived. Being from the south, there were three photos in most black families’ homes—Jesus Christ, Martin Luther King, Jr. and John F. Kennedy. They were bigger than big in the community because they were all leaders and inspirations to those who were struggling. Dr. King became a spiritual inspiration for me because he took on challenges.

WW: You’ve taken on some of your own challenges, even as a young man in pre-integration rural North Carolina.
MLC: Before 1965, in my hometown there was a black high school and a white high school, a black elementary school and a white elementary school. I used to caddy for a man named Davis Lee, another role model of mine. He was a white businessman who took an interest in a black kid in a time when that was not what you did. Davis Lee asked me, ‘This is the first year of ‘freedom of choice’ where you can choose what school you went to. Where are you going to go?’ I said I was going to the black school. He said, ‘Here’s an opportunity for you to help this area.’ I became one of 27 black kids to integrate Wallace-Rose Hill High School.

WW: That’s a very strong move for a young man of 15.
MLC: Yes, it was. But I’ve always been a leader, and it didn’t take me long to establish a leadership position at the high school. I went on to help integrate the movie theater, restaurants and the doctor’s office. Davis Lee sent me away to basketball camp where I met Pistol Pete and then eventually went on to excel in basketball.

WW: Are there any other role models of yours?
MLC: It’s a good one—Thomas Edison. He wouldn’t accept failure. Ten thousand times we’ve tried, 10,000 times we’ve failed. Thomas Edison thought of that as 10,000 experiments we don’t have to try again, 10,000 steps closer to a solution. If he were to have listened to all the naysayers, we would be sitting here in the dark.

WW: You recently spoke on behalf of WARM2Kids and the Family Violence Prevention Fund (FVPF) to the Senate Judiciary Committee about a very emotional subject—the September 2005 reauthorization of the Violence Against Women Act of 1994.
MLC: We wrote this playbook “Coaching Boys into Men” in conjunction with the FVPF that was designed to open the eyes of young male athletes to attitudes that can lead to violence against young women. Some of the senators heard about the project and asked me to speak along with other people like Salma Hayek. It’s one of the most insidious problems this country faces. And it starts at an early age. We need to call those out who are using violence against women for what they are—weak.
We had success. The act was reauthorized, but we still need to tell the world about it. People like judges, law enforcement officers, community leaders, teachers, and journalists all need to work together to make sure we address this issue because if we do, we will have a lot more people who are positive role models.

WW: With all of your time spent caring for others, what do you do for yourself?
MLC: I love writing. I shouldn’t say that because you’re a writer! (laughs) I write a lot of letters. I get these ideas and I write people about projects we can work on together. I’ve written three books, and I can’t wait until I have time to write more.