The Shops at Church Square

From unique American handcrafts, to a nationally recognized restaurant, to fine men’s and women’s clothing shops, and the northeast’s most sophisticated tack shop, the 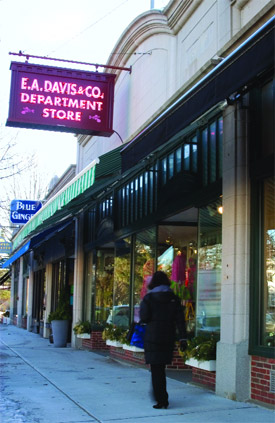 purveyors at Church Square deliver the exceptional, no easy task in urbane Wellesley! This unassuming corner of Wellesley Village could have quietly surrendered to chain stores but was saved one at a time by merchants dedicated to our distinct desires. To succeed, they worked tirelessly to find the perfect balance between the traditional and the contemporary. Their gift to us: shop after shop, a delicious and delightful feast for the eyes.

It’s hard to imagine Church Square without the historic E.A. Davis & Co., a specialty department store opened over a century ago by Wellesley resident Emma A. Davis. Her store was designed in 1920 for a merchandising style few emulate today. Before credit cards and cell phones, buying was a deliciously deliberate and tactile act. To encourage this, the shop featured three long counters running the depth of the store that displayed a dazzling array of merchandise under glass. Davis’ salespeople helped customers one at a time, elegantly removing the selected kid gloves or tailored shirt from the case for inspection. Wellesley shoppers studied the merchandise from afar, and then waited to touch the fabric, examine the stitching, and assess the buttons.

When Bob Skolnick bought E.A. Davis in 1975, he became a “custodian of the legacy.” A Wellesley resident himself, he understood what his neighbors valued most: tradition, quality, and the small-town yet sophisticated feel. After all, the trendy shops of Boston were just a few miles away. So Skolnick kept the labels, counters, cash registers, and layout as they were. You’ll find his son, Rob Skolnick any day of the week helping three generations of Davis customers and welcoming new customers to what he hopes will become “their home away from home.”

Just a few doors down from E.A. Davis is another Wellesley phenomenon, Dover Saddlery. Four US Equestrian Team members started it as a catalog business in the Washington Street basement in 1975. Several years later, they opened the retail shop above. Now Dover Saddlery does over $58 million in sales each year. While the headquarters has moved to Littleton, the original shop remains in our village and is the destination for serious riders from New York to New Hampshire who come for its impressive collection of high-end tack. Curious shoppers are welcome to admire the hundreds of beautiful European leather saddles and bridles. Here they can pay homage to the $4200 Hermès saddle and feel its buttery-soft leather. (Many know Hermès for its scarves and bags, but the company began as saddle manufacturer.) Don’t have a horse? That’s all right. Many locals come to buy the black knee-high riding boots for a stately look. Trish the manager will remind them to purchase boot hooks for getting them on and a boot pull for getting them off. Another wonder to behold: the wall of bits, or “snaffles,” countless variations of the thing that goes in the horse’s mouth. There are also myriad whips, crops and bats for that special someone. 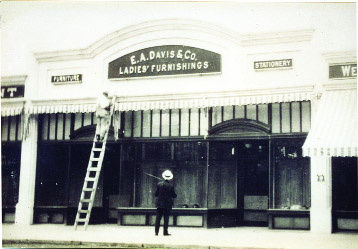 Every store in Church Square is the reflection of an owner who deeply appreciates the sophisticated tastes of resident shoppers. The Gifted Hand opened forty years ago as one of the first Massachusetts craft galleries, originally renowned for its rare Amish quilts. Anita Hausafus bought the shop in 1992. Her store now features the work of over 400 American artisans. Due to her passion for excellent workmanship, The Gifted Hand is considered one of the top ten stores for American crafts in the United States. One of her favorite objects? A large jewelry cabinet that was “a fantastic piece of work with drawers upon drawers.” The meticulous cabinet was made of Oregon-grown madrone and South American jatoba, two beautiful and rare woods. Although its intricacy came at a price, the jewelry cabinet found a new Wellesley home within a week of arriving at the shop. Hausafus credits the fine taste of local customers for making the shops like hers at Church Square so exceptional.

Like Hausafus, Lynda Evans Shotkus discovered the unusual sophistication of the local residents when she came from Pennsylvania as a newlywed thirty years ago. She turned down a job with a certain Nancy Talbot of Hingham (owner of Talbots who had nine stores at the time, now over 1,000) to open a woman’s fine clothing store, Potpourri Designs, in 1980. Shotkus imported a strategy she had developed as a buyer for a large department store. At a time when all pants hung on one rack and all shirts hung on another, Shotkus bought and organized her store by color. “My customers knew exactly where to go for their desired hues and the store looked great.” Potpourri Designs moved from its smaller Central Street location to Church Square six years ago. “There is a more exclusive feel here off of Central Street,” Shotkus adds, “and we love the space with its skylights and high ceilings. The Wellesley-Weston woman has lots of things going on in her life, she’s social, professional, very vibrant, a soccer mom who wants to look great on the field, and she appreciates excellent service as much as our merchandise.”

Karen Clift absolutely agrees. She came here from Connecticut in the mid-70s. Her mother-in-law owned The Clift Collection on 52 Central Street, and Clift opened her own women’s apparel store in Manchester Village, New Hampshire in 1979, which she sold twenty years later. She returned to Wellesley to start Barry Bricken, but couldn’t find suitable space on Central Street. She was pleased to discover the quieter, more intimate Church Square. “The shops here cater to every generation but each strives for something unique. We have very loyal customers who want well-made, not trendy apparel.”

And finally, meet Susu, baker of fresh and delicious treats at Susu’s Bakery Boutique, including coconut cupcakes and donut muffins. She is reluctant to call her patrons anything but friends and believes it is the human element that makes these shops precious. “Wellesley women are compassionate and form incredible friendships. They ask after my mother and father, and I go to their children’s birthday parties. I worry if I don’t see someone for a while.” Susu opened her Church Square store on Valentine’s Day, 2000. As evening set on opening day, “a young adorable fellow” came knocking on the door. He wanted a heart-shaped cookie to propose to the woman of his dreams. But this being Valentine’s Day, all of the heart-shaped cookies had been sold. He looked so forlorn that Susu decided to bake one cookie just for him. As she baked, “he paced the floor like an expectant father.” When it was done, she wrote Will you marry me? in icing on his cookie. “He walked out of the store holding it like it was a box of gold,” she says, “and we said ‘Hurry—lock the doors!’ We wanted to end our first day on a perfect note!” The cookie must have been irresistible. The smitten woman said yes.