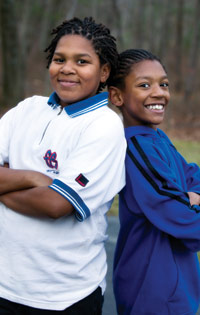 You see it in the smiles exchanged between Kristin Sands and Brenton Caesar-Allen. You hear it in the cheers at the Wellesley High School pep rally. You feel it standing in the Weston High School band room. Kids are making connections, having fun, and learning from each other.

They’ve been brought together by Metco, the small desegregation program that’s made a big difference in the lives of Boston, Wellesley and Weston families for 40 years. And perhaps what’s most remarkable about this milestone is how unremarkable the implementation of the program has been, compared to the volatility and hostility that have marked other efforts to address inequality in education.

Metco, or Metropolitan Council for Educational Opportunity, was formed in 1966, by representatives of Boston and suburban parents and educators responding, in part, to a new state law encouraging racial integration in education. But they were also motivated by the belief that suburban students would benefit as much as Boston students from the experience. The group obtained state and private funding to create a voluntary desegregation program in which Boston families applied for their children to be bused to higher quality schools in the suburbs.

Although Wellesley was one of the first seven towns to participate, support for the program was not unanimous. A group called “Operation Challenge Metco” was concerned the initiative could be costly and disruptive.

The late David Sargent, a Wellesley Selectman and School Committee member who spoke for many Metco supporters, felt it was an idea whose time had come. He wrote in an article after that first year, “Certainly the Metco program is controversial. Everything new usually is. But it is imaginative, original, and is aimed toward the solution of a very real problem—segregated education in an integrated work-a-day world.” 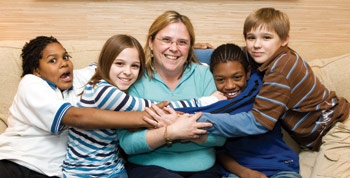 Weston joined the program the following year with previous experience in interracial education. The Roxbury-Weston Preschool began a couple of years earlier, and a group of its graduates started kindergarten as the town’s first Metco students. Imogene Fish, one of the founders of the Roxbury-Weston Preschool says, “It laid the groundwork for Metco being successful those first years.”

A central Metco office in Boston administers the program with state funding, and each town has its own Metco director as well as coordinators within some of the schools. A key component is the “Family Friends” program, which was designed to provide Boston families with a suburban “host” family on whom they could rely for an occasional overnight or in the event of an emergency or mishap.

Attending school in Wellesley and Weston is a grueling routine for the Boston students. Some of the youngest kindergartners arrive at the bus stop at 6:30 a.m. for an hour long ride each way to school. In her book, The Other Boston Busing Story (Yale University Press, 2001), Susan Eaton talks with former Metco students to learn what they felt was gained and lost through participation in the program. Most said they would go through it again, but added that it wasn’t easy living in two worlds: their suburban school culture and their home neighborhood culture.

Wellesley Metco Director, Kalise Jacobs, a former Metco student in Lexington, remembers, “It was hard for a while. I was learning my own identity while at the same time learning two identities… but it became clear to me the benefit of being bicultural.” Jacobs believes her Metco experience was crucial to her success in graduate school.

Wellesley High School Metco senior Brittany Crawford can relate: “You have a different type of personality from one community to another.” And while, Crawford explains, she might talk more casually with her neighborhood friends, she’s also comfortable communicating more formally, in professional settings. Junior Najauna Muschetta agrees: “I know how to present myself.”

Brittany and Najauna, along with junior Mekah McIntosh, are captains of the Wellesley Step Squad. It’s a tradition born in African gold mines, where workers communicated by stomping their boots. It’s popular today in fraternities and sororities at many southern black colleges. 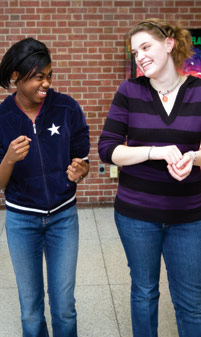 Metco students brought this unique form of movement to Wellesley High School about six years ago. And they regularly bring down the house at pep rallies, with routines that combine stomping, clapping and moving their bodies to a strong rhythmic beat. All are welcome to join, and the group teaches elementary students how to “step” at a bi-weekly clinic.

Wellesley Family Friends Coordinator, Allison Sargent, the daughter-in-law of David Sargent, says the Step Squad and a Double Dutch jump-roping program at Wellesley Middle School are great examples of how Boston students enhance the suburban school environment. “Having students from other cultures, an urban setting, brings a fresh perspective. ” she says.

Elaine Mittell, president of the Wellesley Metco Committee, an independent group that raises money to improve access to educational opportunities for Metco students, says, “When you talk to Boston parents, they take a lot of pride in what their children bring to Wellesley families.”

A fresh energy and electricity certainly pulses through the air at a rehearsal of the Weston Gospel Choir. Weston Metco and Gospel Choir director David Fuller, energetically bursts through the door and quickly tells the diverse group of Weston High School students that they have only three rehearsals to learn a new song for a big concert. A professional musician, Fuller shouts, shimmies and gestures the group to attention. As the students try to sing a new song, they seem timid at first, but Fuller coaxes them along, singing each part himself to show them the way. He dances as he sings and soon his enthusiasm is contagious. Deciding he needs to take it up another notch, he sits in on drums and really gets the room rocking.

Fuller has been Weston’s Metco Director for the past four years, but has been teaching at the high school for more than 20 years and has witnessed the evolution of the program. He says, “The culture on both sides has changed for the positive as suburban kids get what is needed to understand the real world.” He continues, “I hate to sound corny. But I think it’s a model for the way things should be.”

The bond between Weston fifth grader Kristin Sands and her Metco Family Friend, fifth grader Brenton Caesar-Allen, is just the type of comfortable connection the program hopes to foster. The children know and understand each other, and the fact that they are from different racial backgrounds is inconsequential.

As Kristin and Brenton arrive at the Weston Middle School gym for a basketball clinic, they chat easily and demonstrate the kind of easy camaraderie that develops between friends who have known each other for a long time. They’ve known each other since they were preschoolers, watching their older brothers play soccer together. When the Sands family learned that the nice Boston boy their son had been getting to know had to drop soccer because of transportation problems, they offered to feed him dinner and keep him at their home until his mother could pick him up.

Rachel Caesar, a single mother, remembers the relief she felt when she received that offer: “I was grateful that someone was willing to help.”

Rachel was also a Metco student in Weston, and she recalls how hard it was to feel connected with the other kids because transportation and logistics often made it too difficult to participate in after-school activities. “I want my kids to be as active in Weston as possible,” says Rachel.

Joan and Ken Sands have made a serious commitment to Rachel and her two boys in helping to make that happen. Over the years, they have kept the boys late after school to participate in swim lessons and social activities. And this year, they have worked to make Brenton’s dream of becoming a basketball player a reality, by helping to make it possible for him to play on a team in Weston by smoothing out transportation problems.

A few years back, when Rachel was called to active duty in Iraq for the National Guard, the Sands stepped up their commitment in a big way. They took the boys every other weekend, to provide some support to Rachel’s mother, who was caring for them.

Several photo albums chronicle the adventures they enjoyed together during that time—kayaking, skiing and the trip to a Cape Cod beach orchestrated by Ken Sands when he realized Rachel’s boys had never seen the ocean. Then there was the time Ken taught all the kids to ride bikes. Brenton’s older brother, seventh grader Marquis Caesar, laughs as he remembers how they had to scramble when it started to rain. “Dr. Ken and myself, we rode back home on the double bike while the other guys went in the car.”

Joan Sands is quick to point out that her entire family benefits from their relationship with Brenton and Marquis. She says, “As a social worker, I wanted to welcome a family into our home like this, and Ken grew up without a father.” Seventh grader Trevor Sands, says it hasn’t been too tough sharing his space and his stuff. “I feel like it’s all worked out really well. If we feel like there’s a down side to something, we’ll talk about it.”

The Metco directors and coordinators in Wellesley and Weston work hard to provide a warm and caring environment for the Boston students.

Wellesley Metco Director Kalise Jacobs seems to know every one of her students by name: “They’re my babies,” she says, “I’m supposed to know.”

Deborah Ward, the Metco Coordinator at Wellesley High School and coach of the Step Squad, says her door is always open. “This is a place where they can talk… whatever issues that arise… I’m in close contact with their parents… getting them to work through things… they call me ‘Mama Ward’.”

Finding ways to help Boston and Weston kids connect is a big priority for Weston Family Friends coordinator, Sheila Burkus. “The hope of the program is that each family would invite each other back and forth.”

To bring parents together, both towns hold some PTO meetings in Boston. And they also try to make social activities more accessible, like the annual Weston potluck supper, which is held in Boston every other year.

The program has raised some issues. Detractors say Metco students have trouble keeping up academically, though both towns have put extra homework support systems in place. And some students have been asked to leave the program for disciplinary reasons. But in its 40-year history, there have been relatively few serious problems with Metco.
Statewide, the program has grown from just over 200 students in seven suburban towns to more than 3,000 students in 38 towns. And Wellesley and Weston, with upwards of 160 Metco students each, have always had very committed participants.

Perhaps Kalise Jacobs sums it up best. “Metco,” she says, “is what’s right about this country.”