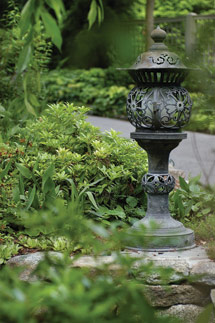 When Sherry and Dan Kasper purchased their Wellesley colonial revival home in 1976, the scene was vastly different from the garden showcase it is today. Dubbed the “haunted house” by the neighborhood children, the house sat vacant for two years and the grounds were overgrown with trees, shrubs, and weeds. Gardens and bedding areas were non-existent and the absence of light due to the quantity of overgrowth created an eerie feeling. Needless to say, the Kaspers had their work cut out for them both inside and outside the house. Today, the beautiful grounds and gardens delight the family and others who have the pleasure to visit on garden tours, most recently in June of last year on the tour sponsored by the Garden Club Federation of Massachusetts. Sherry Kasper says today, “We had the good fortune to start a garden from scratch, with the exception of some large trees, and to watch [our landscape] develop and mature over a thirty-year period.”

Not all of our landscapes are in quite the shape the Kaspers once was, but many of them are less than ideal. Before you plunge into a redesign, take some time and walk around your property. Are you satisfied with what you see? Does your landscape flow and fully utilize the space at hand? Do you yearn for a leafy retreat and for a bench to sit upon? Have the children outgrown the sand pit in which now only neighboring cats express interest?

Too often, more time and thought go into designing the interior of a house and its exterior details than do in planning the surrounding outdoor landscape. Yet your exterior landscape is an intrinsic part of your property and should provide a setting of character and beauty as well as comfortable outdoor living and entertaining areas. A well-landscaped home also improves the value of your property, so, rather than thinking of landscape design as a major expense, think of it as a useful capital improvement.

With an abundance of mature sites and historic homes, Wellesley and Weston homeowners face particular challenges in preventing gardens from becoming overgrown and useless for recreational use. From the beginning, the Kaspers showed sensitivity to the period in which their home was built, and throughout the years have gained an understanding of their landscape. Plenty of mistakes were made along the way, but as Sherry Kasper explains, “We experimented considerably and sought advice from garden designers whose work we admired.” 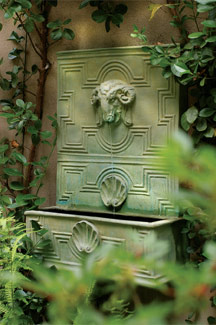 Creating an ideal landscape takes time. When executing improvements in a house or to a garden, it’s important not to be too hasty in demolition, or overly zealous in pruning trees and shrubs. Live with your landscape for a bit and discover what emerges over time. Determine which mature, rare, or specimen plants should be saved. If you are thoughtless while clearing the land, the pleasing or valuable plantings could be lost forever. Does your property appear bare and forbidding during the winter? Should there be more color or less? Would you like more texture? Continually assess the landscape, and ask what you want the space to do for you.

Julie Moir Messervy, a nationally-known landscape designer and former Wellesley resident, believes that “a house is not a home until the landscape is part of it. It should be a unified design — the interior of the house should relate to the exterior plan.” Moir Messervy, who co-authored with Susan Susanka Outside the Not So Big House: Creating the Landscape of Home (Taunton Press, 2006), also says that “there are simple ways to tie the inside and outside together by repeating a particular inside wall color outside in flowers, or repeating a particular form or texture for a harmonizing effect. You can reverse that by picking a simple form from the outside and bring that inside, too.” Another suggestion is to “look outside your windows and at the end of an axis put a focal point which aligns the inside with the exterior space.”

When the Kaspers moved into their home, the only characteristic the landscape and the house had in common was the state of disrepair. As they began to integrate their home with its surroundings, their primary goal was to be able to look out every window and see a garden. Before the Kaspers could create any garden spaces, however, they decided to change the grade of the property and the way the house was positioned. The house appeared to be ready to fall off the hill upon which it was perched, so they added a fieldstone wall to create a level terrace in front of the house. They also removed the circular driveway to create more space for a white garden on the south side of the house. To let sunlight in, they removed dead trees, pruned live ones, and moved some smaller trees to the perimeter of the property.

Moir Messervy also emphasizes the importance of what she calls an “away room” set in the landscape. Just as you have a special out-of-the-way spot in the house to escape the hubbub of everyday life, there should be an escape spot in the garden—perhaps a bench placed under a favorite tree, for example, or nestled deep within a border.

Each of the gardens on the Kasper’s half-acre lot has a magical personality of its own. Immediately adjacent to the side of the expansive wraparound front porch is a white garden area, with trellis work and a meandering grass path anchored by a large Katsura tree. Along the front of the house is an entryway garden area with mixed borders that include Lady’s Mantle, Viburnum, Annabelle hydrangea, mock orange, and ornamental trees like Stewartia and weeping cherry. At the center of these border beds, at the base of the front steps, is a small bluestone landing hedged in boxwood. A garden bench is flanked by two metal urns, which provides a charming respite and completes the scene. The family room, added in 1985, opens onto a bluestone patio on the north side and onto a pea stone courtyard and gardens on the east side. The patio, surrounded by a stone wall, includes a small round pool, complete with frogs in the summer, and charming trellis work that provides structure as well as privacy.

Landscape design is a challenging art form because it is transitory and subject to the whims of nature. The landscape “canvas” evolves over time, producing a unique beauty or quality particular to the site. It is not static like a painting or sculpture. Smaller spaces are more challenging to design, and in the Wellesley and Weston areas, older homes on small lots are being replaced with homes that have a significantly larger footprint. Achieving a seamless connection between the interior and exterior spaces is possible, but requires a very good eye and design sense.

As with other art forms, garden design encompasses similar principles of composition: the establishment of focal points, the addition of accents, and the creation of unity through rhythm, balance and harmony. The sky can be looked upon as the ceiling, which we might make lower in some areas with a canopy of trees or with a rising pergola. Walls can be made of plant material massed in beds and borders, or hedges, both of which can define a space. Fences and screens can also serve as a wall, the fence to define the perimeter of a property, and the screen to enclose the “rooms” in a garden area. The “floor,” defined as paths, stairs, patios and driveways, for example, can provide the entire framework for overall composition, and each surface is an important element to consider before making a final decision. The “floor” is literally the ground upon which all the surrounding areas stand, and will command a large portion of the budget. The type of materials chosen should be compatible with the overall landscape design as well as the design of the house. As for the type of materials to use, the designer is the best guide as to price, appropriateness, and how the materials will age. Natural materials are typically more expensive than man-made products.