The Father or Transplantation 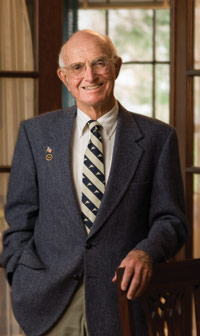 If you ask Wellesley resident Dr. Joseph E. Murray to describe his feelings on December 23, 1954, the day he performed kidney transplant surgery on his patient Richard Herrick at Boston’s Peter Bent Brigham Hospital, he’ll answer, “It was just another day—a part of our lives.”

Is this modesty or professional dispassion? Either way, his peers begged to differ with Murray’s assessment. To recognize his achievement on that day, they awarded him the 1990 Nobel Prize in Medicine.

Murray’s mid-20th century surgery proved to be the first successful human organ transplant in history, paving the way for the 28,000 US organ-transplant recipients currently granted the gift of life each year.

The Peter Bent Brigham Hospital (now Brigham and Women’s Hospital) was an exciting center of innovation in the 1950s, with the chiefs of surgery and medicine, the late Drs. Francis Moore, and George Thorn, committed to an organ transplant program. They hired a young plastic surgeon from Milford, fresh out of the Army Medical Corps, who had been grappling with an obstacle universal to all forms of transplantation: tissue rejection.

“I had graduated [from Harvard Medical School] and completed a surgical internship during the war, and was shipped out to active duty at Valley Forge General Hospital in Pennsylvania,” Murray explains. “It was a facility devoted to reconstructive surgery of battle casualties. We saw a lot of burns and we were using skin grafts to save lives. I was very interested in the biology of transplants, and why it is that a piece of skin grafted from one’s own self will live, but from another [person], won’t. I wondered how the body recognized the difference.”

And so Murray—who says he was born knowing he’d become a surgeon—began experimental operations on dogs, mice, rabbits, cats, sheep, and even horses to study the body’s immune reaction against foreign skin tissue. He was surprised to learn of one exception: In 1937, skin had been grafted successfully between homozygous (identical) twins by Valley Forge’s Plastic Surgery Chief, Colonel James Brown.

Murray arrived at the Brigham in 1951 armed with this intriguing scrap of information, primed to transfer his knowledge of skin grafts to the enigma of organ transplants. As a member of the transplant group, he continued experimenting with dogs, applying his surgical technique to kidneys.

“When our team eventually tried human transplants, they were between unrelated persons,” he says. “They were lifesaving in the sense that they might work for a short time, and would give several months of good life. Ultimately, though, they were rejected.”

But like a seed seeking sunlight, Murray’s thoughts kept returning to Brown’s skin-grafting success in twins.

“We had that bit of knowledge,” Murray explains. “We knew that if we had genetic immunological compatibility, there was a chance that [transplantation] would be successful.”
As if by divine design, a 23-year-old patient, Richard Herrick, was referred to the Brigham experiencing renal failure. His medical history revealed stunning information: Richard had a healthy identical twin, Ronald. “Suddenly, it was an entirely different ballgame,” says Murray.

While Murray’s professional life blossomed in Boston, his personal life was taking root in Wellesley. He was married to Virginia “Bobby” Link, and already a father of two. “We liked the community aspect of Wellesley, he says. “The school system is what really attracted us. All six kids went through it from K-1 through high school.”

A Wellesley resident for 56 years, the 87-year-old surgeon has a tender spot for the town and enjoys taking walks on his sun-dappled street, Abbott Road. “To live in Wellesley is a tremendous privilege,” he says. “Every time the seasons change, you just get revivified.”

Plans to raze the original building of the Wellesley Country Club sadden him, though. “I’ve been active in trying to have the current members understand the history,” he says. “It was from this building that the patriots left for Concord and Lexington. It’s beautiful to have this heritage in your own hometown.”

Looking trim in a white V-neck sweater in his cheerful living room with jewel-toned Oriental rugs scattered about, the soft-spoken doctor who gazes directly into your eyes exudes a composed yet commanding demeanor, one you’d hope to see in your surgeon. Picking up the thread of his narrative, he returns to fall 1954, when excitement was cresting at the Brigham for a transplantation attempt between the Herrick twins.

“I went to the police to get the twins fingerprinted to assure same identity,” Murray says, “That night when I turned on the radio I heard the report, ‘Brigham doctors plan daring operation.’ So the cat was out of the bag. Every day for a month there was a bulletin.”

And there was skepticism. Subjecting a healthy person to a major surgical operation “not for his own benefit” was a radical concept.

“Many prominent citizens and doctors said that it was foolish to try, that it couldn’t work,” recalls Murray. “So we had conferences in the hospital. We had surgeons; we had the Cardinal; we had a leader of the Jewish faith. We wanted to get the consensus, because we didn’t want to do something wrong. We spoke with the family many times. We didn’t advise the operation; we said we would be willing to do it. That was very critical.”

By the time the twins’ identical status was further confirmed through blood-typing and successful skin-grafting, and consent for the transplant given, Richard Herrick was close to death. Murray hurried through a trial run of the surgery on a cadaver, setting the stage for December 23, 1954.

“We knew that it was a success,” Murray says, his face glowing even more than fifty years later. “The next day the kid was hungry and had a sparkle to his eyes. We just knew it was good.” And, indeed, it was. Richard Herrick married his recovery-room nurse and survived for another eight years.

In late 1959, after dozens of successful twin-to-twin kidney transplants, Murray experienced a “eureka” moment. He learned of a cancer-fighting drug, Imuran, that displayed immuno-suppressive properties. Could the drug be an antidote to the still-insoluble rejection problem in unmatched transplant patients? Murray began animal testing immediately.
“Once we started using the drugs, we had dogs running around the lab,” Murray says, his eyes crinkling with amusement at the memory. “One female with a kidney transplant delivered a bunch of pups … We started with humans in 1962. It gave us a solution that others took up in eventually transplanting the liver, the intestines, the pancreas, the lungs, the heart.”

And the accolades came raining down. Murray received awards from the Boston Surgical Society, the National Kidney Foundation, the Royal College of Surgeons of London, the National Academy of Sciences, the International Society of Surgeons; and, later, an oil painting of the Herrick surgery at Harvard Medical School. But he never figured on a Nobel Prize.

“My good friends in Sweden said, ‘Joe, you’ll never get the prize. We’ve nominated you seven or eight times, and they just won’t give it to you. The problem’s too clinical. You work with patients, not a lab.’”

So in 1990, when Murray flew to San Francisco with his wife to deliver a talk at the American College of Surgeons, he hadn’t an inkling of how his life was about to take a somersault. “It was a Sunday,” he says, the memory sharply etched. “We were staying with our daughter outside of Berkeley, sleeping off the jet lag. At about 5:00 a.m., Meg came in, shook me, and said, ‘Daddy, I’m sorry to wake you, but I’ve got news—you’ve won the Nobel Prize!’” (Murray was co-recipient with Dr. E. Donnall Thomas.) 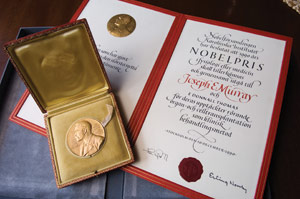 A plastic reconstructive surgeon at the core, the much-decorated doctor gave up transplants in the 1970s and devoted his last 20 professional years to developing a cranial/facial program for children with congenital deformities, retiring in 1986 as Chief of Plastic Surgery Emeritus at both Children’s Hospital and Brigham and Women’s Hospital. In retirement, though, he has been anything but retiring.

“I’ve been speaking around the world and meeting with young scientists,” Murray says. “Just the other day a couple of fellows from Austria dropped by. We chatted about their work doing transplantation of upper extremities.”

Still a strong believer in basic science (he donated his Nobel-Prize money to the hospitals that fostered his own experiments), Murray is hopeful that stem-cell investigation will one day create needed organs. “I don’t think it’s going to come in one epiphany, but a little here and there until it jells,” he says, his hands steepled in thought. “…We are human because we are curious, and curiosity is what keeps human beings looking forward.” As in 1954, however, he is sensitive to other viewpoints: “We in the scientific community have a great responsibility to the public. We can neither put on the brakes to progress nor go ahead without being aware of what the public thinks…we’re part of society.”

As his stature continues to grow, Murray squirms at his unofficial title, “Father of Transplantation,” preferring instead to credit his success to teamwork. He does revel in being patriarch of his own sprawling family, though, concluding with a personal anecdote that hints at his essential nature:

“One of my grandchildren said, ‘Granddaddy, how did you win a Nobel Prize?’ I replied, ‘Grant, I didn’t win a Nobel Prize.’ His grandson’s face fell. ‘No, I was recognized by a Nobel committee for work I was doing every day. You don’t start life to win prizes. You start life to do what really satisfies your inner self. If it turns out that you’re recognized, it’s just frosting on the cake.’”