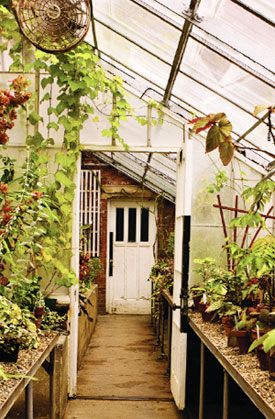 New york has its Central Park, Boston its Emerald Necklace, and just 12 miles west of Boston on the shores of Lake Waban is another gem, the Wellesley College campus. All three sites were designed by that most venerable name in the annals of landscape design: Frederick Law Olmsted, Sr. The story here though is more specifically about a few treasures found within the campus, and it begins in the latter half of the 19th century with a contemporary of Olmsted’s.

In 1870 a wealthy Boston lawyer cum philanthropist named Henry Fowle Durant and his wife Pauline decided to establish a private women’s college which would provide an excellent education for both mind and body and be on a par with Harvard College. That year they purchased a 500-acre farm along the shores of Lake Waban, its rolling landscape offering an ideal environment and setting. The Durants were keen horticulturists and familiar with Olmsted’s work, so trees and shrubs were planted to frame views of the lake and meandering paths were laid. Although everything was built for educational purposes, Durant specified it should be aesthetically pleasing in keeping with Olmsted’s ideals.

From the beginning, botany took a stronghold under the college’s first Professor of Botany, Susan Hallowell, and it was supported by the Durants’ generosity in letting students use their private greenhouses to study the tropical and subtropical plant collections. The campus woods, meadows, and swamps offered many native species, too. The impact of the botany department continued into the early 20th century with the arrival of Margaret C. Ferguson, initially as Instructor of Botany. She campaigned vigorously for new greenhouses and in 1922 saw her efforts fulfilled with the construction of fourteen greenhouses that followed her design, layout, and suggestions for location. In addition to the greenhouses, which today bear her name, a tribute to her vision and contribution to the botanical sciences, she secured funding for the Alexandra Botanic Garden and the Hunnewell Arboretum—a combined 22 acres surrounding the Science Center—all treasures to be explored.

When Margaret Ferguson joined the Wellesley College faculty, Caroline Hazard was the college’s president, and she invited Frederick Law Olmsted, Jr. to develop a campus layout plan. Olmsted continued his father’s design philosophy to preserve a site’s natural beauty, its genius loci. Upon surveying the site, Olmsted was impressed by the glacially-created topography with its meadows, valleys, woodlands, native plant communities, and the beautiful lake, all of which he unequivocally advised the college to preserve. 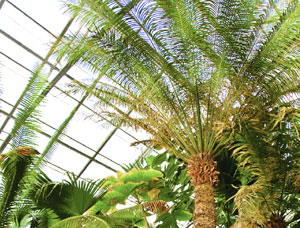 Today walking along the curving paths that follow along the lush valleys with buildings dotting the hills, one can truly appreciate the picturesque style of Olmsted’s design. Sitting atop a hill is the Science Center with the Ferguson greenhouses attached. Here I met with Kristina Jones, Director of Botanical Gardens, and a plant ecologist by training who oversees the greenhouses, botanic garden, and arboretum and is assisted by a staff of three. Jones also teaches an Environmental Horticulture course. Wellesley College prides itself on small classes but this course attracts 50 or more students and is filled within a few hours, attesting to the continued popularity of biological sciences.

Appointed in 2005, Jones is clearly excited and enthusiastic about her work and accomplishments to date. She is putting the finishing touches to a plant collections policy which will be “central to the future of the department and for the diversity of plant material both inside and out…it’s invaluable.” Citing an example supporting the policy need, Jones explained that a native dogwood (Cornus florida) allée in the arboretum had succumbed to the disease anthracnose a few years back. “The dogwoods were pulled out and replaced by Japanese maples (Acer palmatum),” she said, “which are beautiful trees but not native and therefore not in keeping with the arboretum’s directive.”

To promote interest in the biological sciences, a Cultural Botany Club and a Students for a Sustainable Environment Club have been established, reflecting current interest in the environment and concern about food sources. An endowment for a fellowship in Ethnobotany is also in the works. This summer saw the completion of a new Educational Garden that is an effectively-designed three-gardens-in-one, fronted by a local fieldstone wall. The butterfly garden contains native perennials that provide nectar or host caterpillars. A conifer garden features dwarf and miniature evergreens with unusual growth habits, and many of the plants in this section have corresponding normal-size specimens elsewhere in the Botanic Garden, which provides a fun search for a sunny day. A screen/rock garden with alpine plants is set among large rock outcrops that provide a variety of microclimates. Acknowledging that there has been “a succession of amazing leaders who forged what is now the Biology Department,” Jones is clearly setting the course for a strong continuation of Biological Sciences at Wellesley College by raising its profile as an outstanding campus resource that is educationally focused and aesthetically pleasing. Durant and Olmstead would be pleased indeed.

Assisting Jones is Tony Antonucci, Senior Greenhouse Horticulturist, who arrived on campus in 1982 just as a new greenhouse was being installed. “Well not exactly new” says Antonucci. “It was a retro-fit of the 1920s Lord & Burnham greenhouses… the superstructure and heating system was left and it was made more energy efficient; now 25 years on it’s deteriorating.” And, as though to prove his point, a piece of metal structure came clanging down as we toured through the houses. Echoing Jones’ plea, Antonucci said “it’s time to get a green building… we can’t collect rainwater because there are no gutters, vents are opened by hand cranks…systems are archaic….energy use could be dramatically improved….trees planted decades ago block sunlight from the houses…so we had to cut down some trees…..[it’s] very frustrating.”

In spite of these woes the plants look remarkably healthy and Antonucci attributes this to their current horticultural regimen. “Twenty-five years ago we were applying 30-50 gallons of pesticide weekly and did that for a number of years,” he says. “Then one day we questioned why.” Gradually the heavy chemical usage was replaced with environmentally-friendly organic practices. It is an Integrated Pest Management (IPM) program whereby beneficial insects are introduced to control the undesirables, using less toxic sprays and cultural techniques such as hand removal of insects. But then another problem arose; plants were browning around the edges including the 135-year old Durant camellia and this made Antonucci very nervous. The well water was tested and was found to contain chloride which is used to treat the water and make it potable – fine for humans but not so for tropical plants since it cannot be filtered out and was building up in the soil.

Adding fertilizers only exacerbated the problem as all are salt based; replacing all the soil in the greenhouses would be a mammoth undertaking and not an option. Their solution takes organic practices a step further, to the cutting edge of horticulture and to what is known as the soil food web. Basically this means paying more attention to soil biology, to what is happening below ground. By encouraging beneficial soil organisms we in turn have healthier plants which are able to overcome disease organisms and flourish. In place of the proprietary chemical regimens previously used for fertility management, compost and compost teas are applied along with a seaweed fertilizer. The Ferguson greenhouses can be thought of as containerized plants, but on a huge scale. The natural replenishments plants would have in their native habitats are not present and are replaced with a humanly-controlled environment. For a long time the plants did well but, continued Antonucci, “using the chemicals actually killed all the microscopic organisms that were necessary for plant growth.” Now he and his assistant, David Sommers, make their own compost tea which is used to top dress the soil every six months and in the interim they spray it on as a foliar feed. “It’s kinder and gentler” said Antonucci.

Antonucci and Sommers beamed when pointing out favorite plants or unusual specimens. The warren of houses is bursting with plants from around the world – tropic, desert, and other climactic regions as well as seasonal displays. Outside are cold frames, beds for heeling in small woody plants and warm pits for over-wintering tender plants. Everything is here to make a student-cum-botanist happy.

Walking through the Alexandra Botanic Garden and Hunnewell Arboretum is a horticultural delight. The collection of specimen trees is classically arranged by family with over 50 families represented, many dating back almost 100 years. There are spectacular white oaks (Quercus alba) which pre-date the College and a waterfall which although artificial feeds the pond. The arboretum is a collection of habitats planted mostly with native trees and a bird refuge. It includes upland woods and a spectacular meadow all maintained by Tricia Diggins, Senior Gardens/Horticulturist. Ms. Diggins said her biggest challenge is “fighting invasive plant species in order to maintain a diversity of plants in the wooded areas and meadows.” She does take an environmentally friendly approach “trying to work with nature and minimal pesticide use…herbicide use is mainly for poison ivy and the cut stumps of invasive trees.” Continuing along the mown paths one is transported to another world of bird song, rustling leaves, and glimpses of wildlife scurrying about their daily business.

When you visit, begin at the visitor center run by the Wellesley College Friends of Horticulture. A friendly and informative group, they have free maps and docents available for tours.
Greenhouses are open daily
8:00 am – 4:00 pm
781.283.3094
E-mail: horticulture@wellesley.edu

The arboretum and botanic garden are open daily; they are part of the campus. As the college generously allows access to the public, please do not leave litter and please bring a plastic bag if you bring four-legged friends with you.