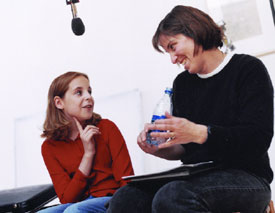 When babson college contacted Wellesley resident Mary Mazzio about making a documentary film on entrepreneurs and their mothers, they knew they had the right person. At the time, Mary was promoting her second film, Apple Pie, which focuses on high-performance athletes and their mothers. The head of marketing at Babson, Scott Timmins, wanted Mary to use that same concept but apply it to entrepreneurs. “We were intrigued by the idea of looking at the family as a key in preparing young people for success, particularly the important role that mothers play in developing entrepreneurial spirit,” said Timmins.

A mother of two, Mary is an Olympic rower who participated in the 1992 games in Barcelona. She is also an entrepreneur who gave up a partnership at a large law firm in Boston to become a filmmaker. Combining the stories of entrepreneurs and their mothers seemed like a natural fit, and the resulting film, Lemonade Stories, was released to great acclaim in 2004. The film is being shown throughout the world on television and in classrooms, boardrooms, business schools, consulting firms, and economic development groups. Lemonade Stories premiered on Israeli television in the spring of 2007, and has recently been broadcast in Hong Kong, New Zealand, Latin America, the United Kingdom, and the Middle East.

Known as one of the best schools in the country for its entrepreneurial leadership, Babson’s MBA program has been ranked number one in entrepreneurship by U.S. News and World Report for the past 12 years. Although Babson College underwrote Lemonade Stories, only one of the entrepreneurs in the film, Arthur Blank, founder of The Home Depot, attended Babson. “The folks at Babson were phenomenal to work with,” said Mary. “The school was very entrepreneurial to do this film.”

Mary and her collaborators at Babson felt that it was important to have some diversity among the film’s subjects, whether by race, gender, or age. One of the most inspiring profiles in the film is about Kelly Reinhart of North Andover, who created the “T-Pak” when she was eight years old. It’s a thigh pack that looks like a holster and is designed to hold a cell phone, camera, or keys. Like several mothers in the film, Kelly’s mother never let her children say, “I’m bored” or “I can’t find anything to do.” Kelly’s entrepreneurial idea came one rainy afternoon when her parents were tired of all the kids running around the house. They sat them down at the kitchen table and had a contest to see who could come up with an idea for a product. Kelly’s father chose her drawing and had it made into a prototype of the T-Pak, which became a huge success. Now Kelly’s father works for her company.

What did the mothers of this diverse group of entrepreneurs do to foster creativity, determination, and courage in their children? Richard Branson’s mother encouraged his independence at an early age and refused to let him be shy. Those who are familiar with Branson’s extraordinary spirit, as an entrepreneur and as modern-day adventurer, may have a hard time believing that he was a shy child, but his mother had to encourage him to have a voice. In the film, Eve Branson says, “I was desperately keen that they never be shy, because shyness to me is being introverted and thinking of themselves. If you think of other people enough, you’re never going to be shy.”

Another theme with all the mothers in Lemonade Stories is teaching their children to follow their dreams. Tom Scott is a good example. Although Tom graduated from Brown University, his mother was supportive when Tom didn’t get a traditional corporate job or enter graduate school after college. He and his college roommate, Tom First, started a business that gradually evolved into Nantucket Nectars, but Tom Scott lived in his parents’ old Chevy Suburban for several summers while he got the business off the ground.

Tom’s mother had confidence in his ability to do things his own way. “I never questioned that he would be a success,” says Jane Scott in the film. “I noticed at a young age, he could make things happen.”

Mary Mazzio’s own entrepreneurial story is as absorbing and impressive as those of her subjects in Lemonade Stories. Raised in Needham, Mary is the oldest of four daughters. When she was 12, Mary’s parents divorced, and her mother went from being a very traditional 1950s housewife to a single mom trying to provide for four children. Seeing her mother’s dependence before the divorce, then her eventual independence afterwards, had a positive impact on Mary. Her mother returned to school for her Master’s degree, became a teacher, and later worked in human resources.

“Despite somewhat limited options in her own life, my mom always thought that anything would be possible for me,” said Mary. “Her work ethic influenced me tremendously. The message was, ‘Never give up.’ That’s always been a big part of who I am.”

When it came time for college, Mount Holyoke offered Mary a very generous financial aid package. She hadn’t been looking for a women’s college, and at first she didn’t want to go, but she ended up loving it. “A women’s college prepares you in very profound ways for the real world,” said Mary. “When you don’t have the distraction of the opposite sex, you are more focused. You hear your own voice more clearly, and you know who you are.”

An immediate test came when she entered Georgetown Law School, where her class was equally divided between men and women. Despite parity of numbers, she heard more men’s voices in the classroom. Because Mary was comfortable in her own skin, she wasn’t afraid to speak out. “I figured, what was the worst that could happen?” said Mary.

After graduating from Georgetown, Mary joined the Boston law firm of Brown, Rudnick. She practiced commercial real estate law for several years before taking time off to train for the 1992 Olympics. Describing herself as “short on talent and long on determination,” Mary says that she wasn’t a star athlete growing up. But as a rower at Mount Holyoke, she made the first national team in 1983, her senior year. In 1987, she was on the Junior Varsity national team, but she knew she wasn’t going to make the 1988 Olympic team. Mary decided to go for it in 1992, taking a sabbatical from her law practice and training six to eight hours a day for a year. She made it to the Olympics at age 29.

“One of the best things my sisters and I learned from our mother was to believe in ourselves. Even if you have self-doubt, which I definitely had while training for the Olympics, keep going and put it all out there,” said Mary. “Have the courage to fail.”
Back from the 1992 Olympics, Mary considered her future direction. “My question to myself was: ‘How do I make the biggest social impact?’ I considered going into politics, but I concluded that it involved too much scrutiny and would also be hard on my family life,” said Mary. “I always thought film was a powerful medium, but none of the women in films were like anyone I knew. I wondered how I might make a difference in how women perceived themselves by telling the stories of real women who had changed the world.” 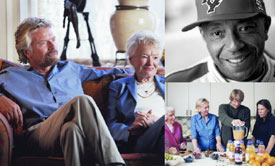 While still practicing law full-time, Mary entered film school at Boston University. She started writing screenplays and had a few meetings in Hollywood, including one with Sherry Lansing’s colleagues at Paramount, but Mary soon realized that she wanted creative control over her projects. In Hollywood, screenwriters are at the bottom of the totem pole.

After her first child was born, Mary shot a short film as part of a thesis project at Boston University. The short ended up being the precursor to her first film, A Hero for Daisy (see sidebar). Mary went back to her law practice part-time and managed to finish the film, which was released in 1999 and became a huge success, literally overnight. “I really had no idea that A Hero for Daisy would be so big or that it would catch on so quickly,” said Mary.

Although she had become a partner in the firm, Mary decided to leave Brown, Rudnick when she realized that filmmaking could be a career for her. She credits her husband for his incredible support as she made the leap of faith into starting her own business, 50 Eggs Films.

“Being an entrepreneur can be very rocky—lots of ups and downs,” said Mary. “Working at a large law firm includes a lot of luxuries. Now when there are copies to be made, I make them! But I have really enjoyed working for myself and being able to choose film projects that will be successful and impactful.”

One of the most gratifying outcomes of her film work has been the inclusion of Lemonade Stories in the curriculum for educators at the National Foundation for Teaching Entrepreneurship (www. nfte.org). Mary is currently working with NFTE on launching another film project, focusing on teen entrepreneurs.

As a mother, Mary is teaching her children to take risks, to believe in themselves, and to know that anything is possible. Her daughter’s recent efforts to raise money for a homeless shelter were empowering, and Mary is proud that her daughter is learning at an early age that she can have an impact on the lives of others. “I think that being entrepreneurial is about being adventurous and willing to take risks,” said Mary. “So many people have entrepreneurial streaks that show up in ways other than starting their own business.”