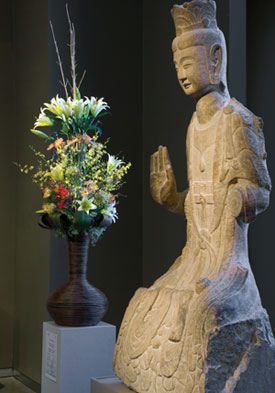 “Every flower is a soul blossoming in nature,” said French poet Gerard De Nerval. With such a heavy concept resting on delicate petals, one can imagine the inspiration one might find in every blossom. The colors, scents, complexities—flowers are nature’s revelations.

So what does one do when there’s a desire to complement something withflowers, instead of using them as the sole inspiration? How does one create a floral arrangement that will draw out the beauty of another object, whether it is a painting or a treasured heirloom?

Although it might seem intimidating, you can create lovely floral arrangements by finding inspiration in any object that speaks to you: a simple piece of art in your home, for example; or an elaborate formal gown that has been in your family for generations; even a favorite warm throw or blanket that’s in your line of sight whenever you settle onto the sofa.

“Don’t be afraid,” says Betty Call, floral designer and owner of The Floral Touch Studio in Stow, Massachusetts. “People think it’s an art, and it is to those who do floral design on a professional basis. But anything you do for your home, the family will enjoy. Don’t be afraid to try. It’s accessorizing your life.”

In terms of floral design, it could then be argued that a rose is just a rose. But pair it with some lilies, a blossoming branch of quince, and a few textured greens, and it goes beyond cliché and becomes something truly special: a delightful counterpart to the intended piece you place it near.

History in Bloom
Members of the Hills Garden Club of Wellesley watched Call create these floral inspirations when they came together with the Wellesley Historical Society for the program “History in Bloom,” where one group brought flowers, and the other a collection of antique clothing.

This well-received program last October blossomed from the imagination of Donna Fessler and Charlene Guigli, co-program directors for the club. Four exquisite pieces of antique clothing were selected from the historical society’s collection, and members watched as Call arranged designs to complement each one. This wasn’t the first time the group had been florally inspired by the beauty of antique clothing: a past meeting included “Hats in Bloom,” during which members made arrangements loosely based on selected hats from the historical society’s collection.

Just as a floral arrangement itself can sometimes have unexpected twists and turns, the “History in Bloom” program proved to have one of its own. 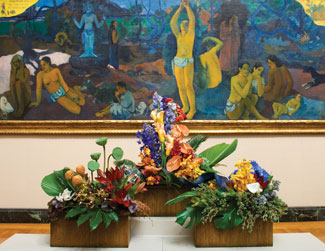 “When we began to search the Historical Society’s antique clothing collection and plan an ideal location for this meeting, we didn’t realize until much later that one of the most dramatic pieces we selected—a luxurious cobalt blue evening bodice with a silver fox trim—was [originally] owned by Mrs. John Oldham.” In a fateful, happy twist of events, Mrs. Oldham’s address, 16 Livermore Road, turned out to be the current home of Carleen Baer, who has lovingly restored the house to its original beauty. She generously offered to open its doors to the club as the perfect setting for the program.

“As a hostess gift for the centennial birthday party of the house, a woman had taken a photo for Baer of an oil painting of Mrs. Oldham wearing this bodice,” says Fessler. “We went to the Historical Society and found the actual painting, which they graciously allowed us to display for the program. We had the bodice on the mannequin, the portrait next to it, and then Betty’s floral interpretation. It was a beautiful confluence of all the things that happened.”

Art in Bloom
Signaling spring each year in Boston is the “Art in Bloom” program at the Museum of Fine Arts (MFA), which inspires creativity in today’s floral designers through yesterday’s art, only on a much grander scale. The museum’s galleries are brought to life by botanical interpretations in extraordinary arrangements inspired by over 60 magnificent works of art—from Asian sculptures to world-renowned European paintings.

Originating in 1976, Art in Bloom was created to attract a different audience and “to entice them into the far corners of the museum,” says Barbara Charlton, Wellesley Garden Club member and past president, and MFA Senior Associate. Charlton has been involved with Art in Bloom in every capacity, from co-chair of Garden Club Coordinators to being a designer herself. She also hosted “The MFA Art in Bloom Road Show” for the Wellesley Garden Club, the oldest garden club in Wellesley, where attendees enjoyed a slide program and floral interpretation demonstration of a print from the museum collection. 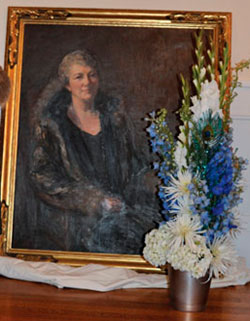 Although they’re only given three hours to complete the task, that doesn’t stop magic from happening. “Most of the arrangers are seasoned. Some of them have come to Art in Bloom for 15 years, so they’re ready to go when they come in,” says Charlton. “Nothing is judged, which takes stress off. It’s all for the public enjoyment.”

Finding the Muse
If you have the desire to create a beautiful floral arrangement but can’t seem to decide how it will take shape, relax and realize that inspiration is all around.

“Just look around your home,” says Call. “Look at the colors in your décor. You were probably inspired to pick those colors by something—your love of the outdoors, some special dishes you inherited, or something special in your home. There’s something around that will inspire you.”

Once you find your object of inspiration, ask yourself why the characteristics of the object “speak” to you, and use these (whether a color, a line, or a shape) to help bring out what is most pleasing to the eye, so that others may see it too.

“Whatever you choose will have a lot of elements in it that will be suggestive of things that you can do,” says Wellesley’s Marisa McCoy, who has been involved in Art in Bloom for 30 years, from MFA Senior Associate to arranger for the Wareham Garden Club. “You have to let yourself be creative as you look at objects, rather than thinking you have to plan.”

The object inspiring you to design will help you move forward with the arrangement. If it’s a room, focus on the color of the walls and rugs. If it’s an object in the room, such as artwork, pick up on the decorative motif, shape, or patterns. A painting usually responds well to an appeal on color, textures, or composition, whereas a sculpture allows you to play with line and volume.

Regardless of element, one thing is sure. Once you’ve chosen the inspiration, don’t just copy it. Complement it.

“My aim is to have people see something in the art that they might not have seen if I hadn’t picked it up in the floral design,” says McCoy. “We’re not saying, take elements and repeat them. Instead look for something subtle that becomes much more visually important when it’s picked up in the floral design. It could be a texture, color, line, or pattern.” 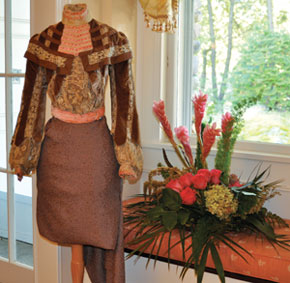 Sometimes the container itself is inspiration for an arrangement, with flowers ironically playing second fiddle to what holds them.

“If it’s a container you want to use, something that’s an art object in itself, use flowers that complement the shape, texture, and style of the container but don’t dominate it,” says McCoy. “This way it becomes a total piece of art, a creative piece created by putting the two things together.” Think of a lined wood container for a natural appeal or galvanized French floral buckets for a flower-market feel. One of Charlton’s favorites is a twig basket resembling a large bird’s nest into which she puts simple spring bulbs.

With most floral designs, the container is a service piece, holding the blossoms with quiet pride. In this case, choosing a matte finish and neutral colors, rather than white or shiny, will put more emphasis on the florals.

Color for flowers is an easy starting point, but don’t stick to primaries. Try complex combinations you wouldn’t think would work. They just might.

“Broaden your sense of what you can do with color. We were taught ‘this goes with that,’ but it really depends on shade,” says McCoy. “If I say, orange and purple, you wince. If I say peach and plum, you realize it looks good.”

Call also suggests walking through your backyard for things you wouldn’t otherwise think to put in a vase—twigs, budding branches, spring foliage. McCoy recommends quince, apple, plum, and cherry blossoms, all of which can be pruned to complement impressionist, Japanese, or Chinese art or decor.

Lilacs, tulips, and peonies are plentiful this season, and although they make beautiful arrangements, time isn’t on your side with these blooms’ staying power. The best arrangements require the least upkeep, which means a week of healthy blooms. Good seasonal standbys that hold up well and come in a variety of colors are roses, chrysanthemums, ranunculus, and carnations, a flower that’s coming back into vogue according to Charlton. Wellesley was, in fact, the carnation capital of the world once upon a time, with greenhouses lining Weston Road. 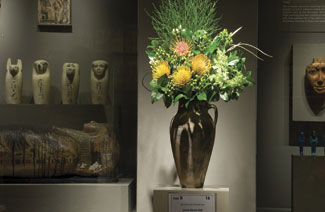 With texture and balance elements to consider, other tips include mixing larger flower heads with smaller ones, choosing greens with different shapes and textures, and thinking about three-dimensional design. One of the flowers McCoy particularly enjoys using is Queen Anne’s Lace, which adds a veiled effect, as if looking through to another flower.

“Choose flowers with character to them in texture and shade, so that they’re worth looking at,” she says. McCoy warns against using some flowers in large groups. “I don’t see using a huge bunch of roses as being as effective as using a few combined with others like lilies and peonies. This way you’re getting texture, one complementing the other because of the juxtaposition of attributes.”

When you’ve created your masterpiece, McCoy recommends going out of the room for a few minutes and returning with a fresh eye. Most problems will pop out, immediately begging to be rectified. “But don’t rationalize it intellectually,” she warns. “Respond to it artistically and do what you need to do to make it work.

“When you finally put it all together and look at it next to [your inspiration], if it has come together the way you want, it will really do something for it,” she says. “That’s what you’re after.”

In the end, your true inspiration should be the fun behind imagining, planning, and making the creation. 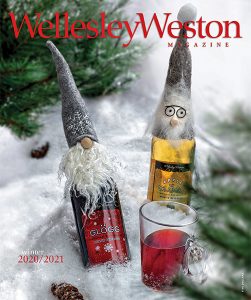