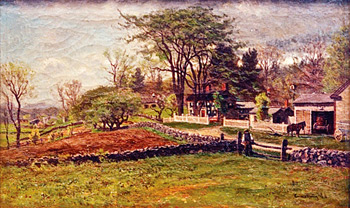 Noted landscape painter John Joseph Enneking created this nostalgic rural scene in 1884. It shows the Hastings Homestead, which still stands at 199 North Avenue and was the boyhood home of Hook & Hastings organ factory owner Francis Henry Hastings. The painting was a 1978 bequest to the Weston Historical Society from Miss Anna Hall, niece of Anna Coburn Hastings. The buildings still remain but the landscape is much altered. Note the details including the horse, wagon, and farmer closing the gate.

Since its founding in 1963 as an outgrowth of the town’s 250th anniversary, the Weston Historical Society has collected a variety of art with one theme in common: Weston. Whether the subject is Town Hall or cows in front of the Anza barn on Highland Street, art can provide a unique perspective on history. What buildings are cultural icons? Do favorite subjects change over time? Can works of art provide important information about landscapes that have disappeared, or does “artistic license” negate their usefulness?

To help answer these questions and showcase its collections, the Weston Historical Society will mount an exhibition entitled “Artists Look at Weston” at the Weston Public Library gallery from March 3 through 29. More than 30 works will be displayed, ranging in date from the late-19th century to the present day, and including oil paintings, watercolors, pastels, prints, and drawings. A catalogue will feature information on the 21 artists represented. The public is cordially invited to an opening reception on Sunday, March 6 from 2:30 to 4:30 pm. 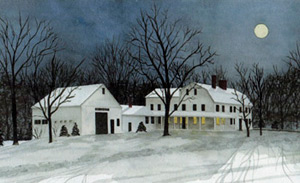 In this moonlight watercolor of the historic Josiah Smith Tavern, artist Jack Richardson depicts the building after the west part of the front porch was removed in the 1950s. The artist uses snow to obliterate the road and artistic license to get rid of unsightly electric and telephone wires, making this image beautifully evocative but unrealistic.

One of the society’s most important works is a large oil painting of North Avenue done in 1884 by John Joseph Enneking, once New England’s most popular and highest-priced landscape painter. The nostalgic rural landscape features the 1823 Hastings Homestead at 199 North Avenue and was probably commissioned by organ factory owner Francis Henry Hastings, who was born and raised there. As his vantage point, Enneking chose the exact spot across the street where Hastings built his own house “Seven Gables” in 1885. The Hastings Homestead and barn are still standing but the painting records landscape elements that have long since disappeared, notably the picket fences, stately elms, and open fields and pastures. Enneking’s work championed traditional New England values. He is often identified as an American Impressionist but was also influenced by members of the Barbizon School, who preferred green and brown tones in their landscape painting.

Not surprisingly, a favorite subject of Weston artists is the Town Green and surrounding buildings. Jack Richardson’s much-loved watercolor depictions of winter sledding and the Weston High School graduation capture seasonal activities that make the Town Green a special place. The Society owns pictures of the Josiah Smith Tavern in all seasons and from all vantage points. Ray Doyle’s watercolor portraits of eight Weston buildings including the Old Library, First Parish Church, and Town Hall were commissioned in the 1990s as an anniversary gift for Selectman Ann Leibowitz. Asked why she chose this gift, Leibowitz explained, “I was and continue to be sentimental about the town and in particular an admirer of the people and institutions of town government. These were the buildings that I felt reflected the institutions of the Town of Weston, and I loved them.” 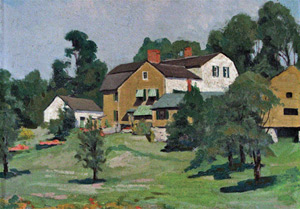 This detail from a mid-20th century oil painting by Weston resident Henry Davenport shows the rear façade of the Josiah Smith Tavern. It is particularly interesting because the wetlands behind the tavern are no longer cleared, so the building cannot be viewed from this vantage point today. The painting shows awnings used to keep out the sun during the period when the Jones sisters lived there. On their deaths in 1947 and 1950, they left the house to the Society for the Preservation of New England Antiquities (now Historic New England). The town purchased it in 1983.

In the early 1960s, as the town’s elm trees succumbed one by one to Dutch elm disease, the Burgoyne Elm became an object of veneration often depicted by local artists. The monumental elm towered over the Fiske Law Office on the south side of Boston Post Road. It was named after British General John Burgoyne, who was defeated at Saratoga on October 17, 1777, in a battle that marked a turning point in the American Revolution. The defeated British general and his troops were escorted to Boston and camped for one night in Weston in the vicinity of the elm, which became a patriotic symbol revered by local history enthusiasts for its age and link to the War of Independence. Despite efforts to save it, the diseased tree was cut down in stages beginning in 1967. The society’s exhibition includes major oil paintings of the Burgoyne Elm and Fiske Law Office by Henry Davenport and Henry Wadsworth Longfellow. 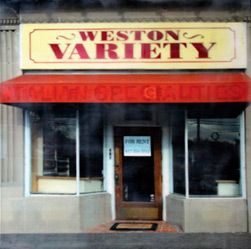 Contemporary artist Deb Hickey focuses on architectural portraiture. In this image of the Weston Variety store once located in Weston Center, she begins with a photograph and transforms it using encaustic and other materials. Her mixed media pieces transform conventional surroundings into personal explorations of color, shape, and space. 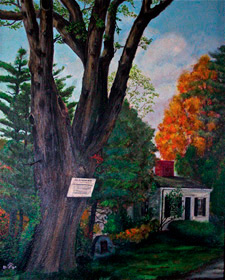 Weston resident Henry W. Longfellow chose the Burgoyne Elm and Fiske Law Office as the subject of this oil painting from the 1960s or 70s. At that time, the venerable elm was in decline from Dutch Elm disease. The Weston Historical Society focused considerable effort on saving the massive trunk and using the wood for commemorative items. The tree appears out of scale in the painting, but contemporary photographs show it towering over the law office.

Today’s artists often choose unconventional subjects that nevertheless communicate a strong sense of place. Two contemporary artists represented in the show have looked beyond Weston’s well-known landmarks. Rhode Island resident Deb Hickey uses mixed media to transform architecture and landscape photographs. Some of her subjects are unlikely to endure into the future, making it all the more valuable to capture them now. The society’s collection includes Hickey’s photograph of Weston Variety, once a favorite place to buy snacks and rent VCR tapes. The store and its distinctive sign and red awning have disappeared but the mixed media work captures a moment in time. In choosing to portray subjects like the Dairy Joy, North Avenue fire station, and Anza barn and cows on Highland Street, Hickey asks viewers to look for what is unique in their surroundings and to find beauty where it is least expected.

Weston resident Larry Grob created a series of evocative pastels in 2009 during his year as the first Land’s Sake Artist-in-Residence. The society’s collection includes a print called “Signs of the Times,” showing the Land’s Sake sign on Wellesley Street that lists what is for sale each day at the farm stand. Another of Grob’s pastels depicts the store window at Florentine Frames, which in its three decades in Weston has become its own kind of cultural icon. 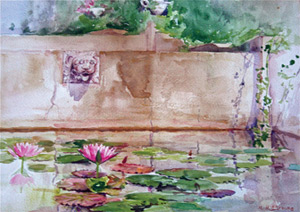 This delicate early 20th century watercolor by M.M. Brooks shows the lion’s head fountain at the Horace Sears estate “Haleiwa.” The fountain and other landscape elements still remain on the property in the 300 block of Boston Post Road.

Other works in the society’s collection help to document buildings that have been lost. Two watercolors depict an 18th century gambrel-roofed Colonial house that once stood behind the present Mobil Station on Boston Post Road and Route 128. As part of the exhibit, photographs and information about this and other buildings are included to provide historical context.

The Weston Historical Society is a private, non-profit organization run entirely by volunteers. Its mission is to collect, preserve, and make available objects, photographs, and memorabilia relating to the history of Weston, and to educate residents about our community heritage. Funding comes primarily from membership dues and contributions.