Lisa fischman leans over the fifth floor railing to take in the dramatic, sky-lit space of the Davis Museum at Wellesley College. A large-scale triangle made of yarn spans three levels, from the second-floor gallery, which houses the Perceiving Space in Artexhibition from the permanent collection, up through the atrium to the top floor.

“The yarn is from Walmart,” Fischman said of the everyday material used by the artist Fred Sandback (1943-2003). His work carves out the shapes and volumes that “coexist” with the architectural space, rather than compete.Fred Sandback: Sculpture and Works on Paper runs through March 6.

Fischman encourages visitors to start at the top and leisurely work their way down, stopping on each floor to enjoy and experience what catches their mood that day – and to return again often. Indeed, since becoming director in February 2009, one of her priorities has been to increase the museum’s visibility in the community as a warm and welcoming destination for a multitude of cultural offerings. In addition to four floors of gallery space, a print study room, and seminar room, the Davis also houses the 168-seat Collins Cinema and adjacent Collins Café.

The versatile spaces allow for many “curatorial pleasures,” Fischman says. Prior to coming to Wellesley, Fischman served as chief curator of the University of Arizona Museum of Art in Tucson, and as Gallery Director at the Atlanta College of Art. Trained as an Americanist, Fischman has focused on investigating the relationships among the fine arts, material culture, design, and popular culture. She has welcomed the integration of multimedia and other new technologies as a way to enhance the museum experience.

“Web access has massively increased foot traffic,” Fischman says of museums around the country. “The desire for someone to go from viewing a work on a computer screen to experiencing it in person is powerful.”

And then there’s the iPhone app.

Visitors can now use an iPhone or iPod to record their emotional or intellectual response to a particular work. While viewing de Kooning’s Woman Springs, for example, users can choose between “disturbing,” “stressful,” “powerful,” or “light.” They also can compare their reaction to others or add words to the database from which future viewers can choose. The app was designed by students from Wellesley’s Human Computer Interaction Lab and others interested in art on campus, including some who interned at the museum. Students can also have paying jobs as museum guards.

“Academic museums serve the mission of the college,” says Fischman. Their collections, space, and personnel should all be well integrated into the students’ experience as well as the experience of area residents, she believes. In response to the College’s increasingly diverse community, the museum has made an ongoing effort to incorporate artworks from previously under-represented cultures. The permanent collection now contains some 10,000 works.

From the Wellesley College archives: The collection over time

Founder Henry Fowle Durant and his friends began making gifts of paintings, drawings, prints, photographs, and plaster casts of classical sculpture as soon as Wellesley College opened in 1875. The Farnsworth Art Building, completed in 1889, provided space for Wellesley to quickly distinguish itself as one of the first American colleges to offer drawing and painting as well as the study of art history.

Alice Van Vechten Brown was named head of the art department and museum director in 1897. She modeled operations after the populist South Kensington Museum in London, now the Victoria and Albert Museum. Brown is quoted in College archives describing it as “a place for classes and students, but also a place in which the public may linger and enjoy; a place to bring children, and in which teachers may study; a model to every college student of what a museum may do for any town in the land.”

Brown hired Alfred H. Barr, Jr. in 1926 as an associate professor and he taught the first American college course devoted exclusively to 20th-century art. Barr went on to become the founding director of the Museum of Modern Art (MoMA) in New York.

John McAndrew, the first curator of architecture at MoMA, became Wellesley’s museum director in 1947. He built significant art collections, including works by many pioneers of European modernism. In 1958, McAndrew moved the museum into the newly built Jewett Arts Center, designed by Paul Rudolph. Rudolph was renowned for his use of concrete and highly complex floor plans, known as the “Brutalist” style.

Under the directorship of Ann Gabhart (1972-1986), the museum became an independent entity at the College, rather than as part of the art department, and its holdings doubled in size. The need for more exhibit space, coupled with the desire to maintain a position of leadership in arts education, prompted a capital campaign for a new museum. Trustee and alumna Kathryn Wasserman Davis and her husband Shelby Cullom Davis gave the cornerstone gift.

Architect Rafael Moneo was commissioned in 1989 to design a building at the very heart of the Wellesley campus that would serve as its cultural hub. His design interconnects three cubic spaces that contrast, in a formal way, with the many older, collegiate gothic style buildings on campus.

The Davis Museum and Cultural Center broke ground in 1991 and was completed in 1993. One of its most elegant features is a simple, saw-tooth skylight that defines the top of the central portion of the complex and allows natural light to spill over the main stair that rises through all five floors. (Moneo was awarded the Pritzker Prize for architecture in 1996.)

A major renovation was undertaken in 2006 that closed the galleries for more than a year. The permanent collection was returned to view in two successive phases in fall 2007 and fall 2008. This newest presentation organizes works thematically and draws upon the strengths of the collection in innovative ways that invite direct engagement.

The desire for direct engagement, Fischman said, is also reflected in the refashioned name of the museum itself: Davis Museum at Wellesley College. But to many on campus, it’s now simply: the Davis.

The Davis Museum at Wellesley College, 106 Central Street, Wellesley, is open Tuesday through Saturday, 11:00 am to 5:00 pm; Wednesday until 8:00 pm; and Sunday noon to 4:00 pm. Closed Mondays and holidays. For docent tour information, call 781.283.3382 or visit www.davismuseum.wellesley.edu. 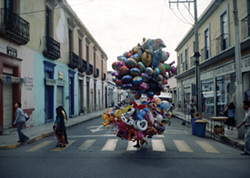 This exhibition features the Belgian-born artist’s subtle performances and extended documentation of life in the congested colonial center of his adopted home of Mexico City. Francis Alÿs specifically designed the multimedia installation for the Freedman Gallery in collaboration with Wellesley art department faculty and adjunct curator James Oles. The exhibit contains 35mm slide projections, video projections, and a light-table with slides and studies on tracing paper, demonstrating the diverse range of Alÿs’s artistic practice over the past 20 years.

Key images include the video works Paradox of Praxis 1 (1997) and Looking Up (Santo Domingo Square) (2001) and the slideshow Ambulantes (1992-2006). The exhibit is presented in conjunction with the Davis’s recent acquisition of a major triptych by Alÿs titled Cityscape (1996-97). It has been installed in an adjacent gallery along with preparatory drawings donated by the artist that are now part of the museum’s permanent collection.