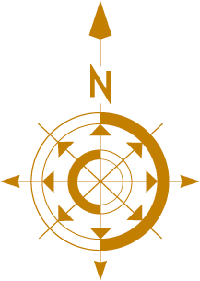 On any given weekend day, you may find Wendy and Tom Birchmire traipsing through local forests or meandering along lesser-traveled trails in the Metrowest area. Following clues and calculations from their hand-held GPS system, they travel several hundred feet in one direction, and then change course, heading several hundred feet in another. Veering from the path, they scour among standing and fallen trees, rocks, boulders, and ravines before they find that for which they came. Before calling it quits, they sign a book, trade a few items, and hide a container, carefully concealing it beneath pinecones and leaves. Sometimes, but not often, they leave disappointed, unable to complete the challenge. Although they are frequently alone, several million people of all ages and on every continent in the world are doing similarly. What are they up to? Geocaching.

Geocaching is an outdoor game, a high-tech variation on the traditional treasure hunt. Pronounced “geo-cashing”—“geo” for geography and “caching” for the hiking term referring to a place to hide or protect provisions — the game takes advantage of simple GPS technology to offer fun and challenging treasure hunts for mild to extreme adventure seekers.

Playing is straightforward: with GPS in hand, players set out to locate hidden containers, or “geocaches,” which can be hidden anywhere in the world, over the river and through the woods, and even in downtown venues. Each cache has latitude and longitude coordinates as well as other clues that describe its location. Players select their search from an online database or a listing site; plot out a feasible route to the cache; and then, using a GPS unit and careful observation, close in on it. The final step of the game is to record the adventure in the logbook found within the cache as well as online at www.geocaching.com. 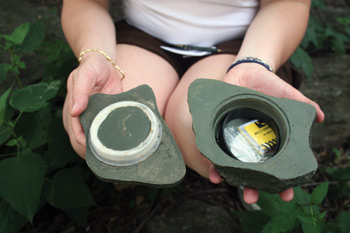 With GPS in hand, geocachers set out to locate hidden containers or “geocaches” similar to these pictured.

Some of the most enthusiastic geocachers live in our own neighborhood. Wendy and Tom, who are known as “BluEyz” and “Bugsy” amongst geocachers, have completed 3,000 “finds” over the past decade and have created several right here at N 42°17.807 W 71°17.540 (Wellesley), N 42° 22.006 W 71°18.187 (Weston), and N 42°17.006 W 71°14′0″W (Needham). Paul and Dana Gillin, co-authors of The Joy of Geocaching, which captures the stories of people engaged—and in some cases obsessed—with the game, have completed 650 finds during the last four years. On a “power run” in Texas, Paul and Dana, whose geocaching handle is “PnD,” located 102 geocaches in one day! While these are impressive numbers for sure, they actually fall short of the “obsessed” category.

“We have met people who have logged more than 35,000 finds over the last eight years,” Paul says. “One small circle of friends drove 12,000 miles – and flew another 10,000—in a mad dash to find a geocache in all 50 states in 10 days. Another team spent weeks planning a speed run that netted a record 413 finds in 24 hours.” That’s obsessed. 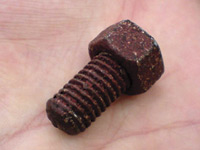 Geocaching is catchy. Over 1.2 million active caches have been registered worldwide on various listing sites since the technology became available a decade ago. On 10/10/10, 78,313 finds were completed and recorded, breaking all previous records for number of finds undertaken in a day.

These numbers make geocaching sound easy enough, and it can be. Some of the simplest finds are known as “park ’n grabs” or “cache and dash.” But sometimes caching can be quite challenging. A cache may be readily accessible, that is, once you cross a body of water or an eight foot snow bank that stands between you and the cache’s coordinates. A cache may be located underwater and require scuba gear, or on a cliff that can only be accessed with rock climbing equipment. Some involve multiple and elaborate steps and others can only be undertaken after solving encryptions and other clever puzzles.

What’s more, once you are in the vicinity of the cache, it often takes a keen eye to actually find it. The best GPS systems are purposely designed to have a three-meter margin of error, so even if you are standing on the cache’s exact coordinate point, you still have to have a good look around. Experienced geocachers will reassure you that as you gain experience with the sport, you develop a “geosense”—a knack for finding caches.

“You naturally begin to look for the oddities, or what we call the ‘UPS,’ the unnatural piles of sticks,” Paul explains. Tom adds that in his experience, ten-year old kids seem especially capable.

Although they can’t be buried, caches can be well hidden. Sometimes they are very small. The tiniest cache, or “nano,” that the Gillins have found was the size of a pencil eraser. (Their largest cache was actually a hidden Nissan Pathfinder 4x4.) Sometimes the cache containers themselves are obscure—faux leaves, light bulbs, birdfeeders, and even hollowed-out animal bones. Lest you be discouraged before you even begin, rest assured that most New England caches tend to be found in good-sized Tupperware containers and empty ammo cans. 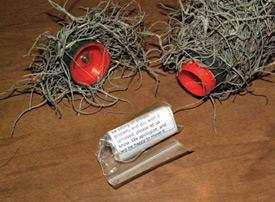 What is it about geocaching that is taking the world by storm? No doubt the thrill of discovery tops the list. What’s more, there are often fun rewards to be found within the cache itself. In addition to a logbook, some caches contain trinkets or geocoins that can be especially fun for younger seekers to find and exchange. Other items have a mission; the original owner may have designated an ultimate destination for the object—Wendy and Tom, for example, recently sent one of these “travel bugs” on its way, hoping that it will ultimately make its way to a cache near their son’s home in Florida. If players can help realize the goal in some way, they are invited to take the item and help send it further toward its destination. It’s intriguing to follow these items’ sojourns, many of which are recorded on www.geocaching.com.

Geocaching can also be a wonderful way to discover the outdoors. “It allows you the opportunity to see things you might otherwise miss, in areas that you may think you know well,” Paul says. On their first find, Paul and Dana discovered a lovely wooded nature preserve located less than a mile from where they had been living for 18 years. “We never knew this place was there,” Paul admits. “Everywhere we go we discover something new.”

“We were hooked from day one,” Wendy says. “It is something we can do together. Tom likes to climb mountains, but that doesn’t really intrigue me—unless there is a geocache to be found along the way.” 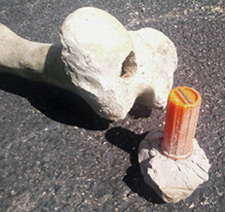 It’s also a great way to meet intriguing people. Wendy will tell you that geocachers as a whole tend to be quite clever and fun people who are always up for a good challenge. Two-thirds of geocachers venture out on finds with others; over 120 geocaching organizations around the country facilitate these gatherings. Wendy and Tom regularly plan “event caches,” that is, gatherings for which they design specific finds. (If you run into them on a find, ask them about the event cache they held in the pitch black on Halloween in the Needham Town Forest.) Once the event is over, the cache is retired—except for the memories.

What kind of equipment is necessary for geocaching and where can you get it? Although there are many elaborate GPS systems out there, Wendy will tell you that the simplest models will do the job. Can you use the GPS applications on your mobile phone? Tom, who actually writes GPS software code for the Android, says, yes, although they are still not quite as accurate as a dedicated device.

Ready to give it a try? I recently did and was lucky enough to accompany Wendy and Tom on one of their local finds, entitled “Ghost LaGuerre.” Based upon an elaborate story that they wrote about the LaGuerre cat family, Ghost LaGuerre is the sixth in their cat-themed geocache series, all of which are located near Morse’s Pond in Wellesley. It is a multi-stage find, meaning we had to solve three clues before we learned the coordinates of the cache.

Setting out on the Crosstown Trail, we wound our way in and around the loop, following clues such as “REALLY dead” and “Oddly bent tree,” to solve the first three stages. Each step was exciting, but I must admit to feeling a rush when we uncovered the final Halloween-themed cache and the spooky treasures housed within. After exploring its contents and signing the logbook, I tucked the cache back in its hiding spot, wondering if I could buy my own GPS device on eBay. Turns out I could. Until it arrives, we’ll be watching Indiana Jones and National Treasure, and wetting our family’s treasure-seeking whistle until, with GPS in hand, we can set out to discover the plentiful geocaches right here in our own backyard. 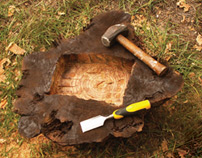 Before You Head Out

• Register for a free account at www.geocaching.com, the largest listing site in the US.

• Select a geocache by zip code or address. Consider the difficulty and terrain ratings—1/1 is the easiest; 5/5 poses the greatest challenge—and whether you need to have permission to cross private property in order to complete the find. (This is often the case in Weston-based geocaches.)

• Get familiar with your GPS system. Input the coordinates of the geocache, or the first step in the case of a multi-stage find, into your device.

top: Although they can’t be buried, caches can be extremely well hidden. above: If you look carefully, you can see a tiny piece of Velcro which is the logbook hidden within the leaf.

• Pack any supplies that you may need—food, water, clothing, some extra batteries for your GPS, and a flashlight if you are setting out later in the day. A camera and trade items make for great memories.

• Tell someone where you are headed. Your GPS equipment will not reveal your location to others.

• When you arrive at your starting point, mark the trailhead or your car as a “waypoint” to facilitate finding your way back. (It’s more effective than breadcrumbs!)

• Familiarize yourself with the geocache description and clues and then head out. Be sure to look around while you are out, not just focusing on the GPS readings.

• Once you find the cache—yea!—sign the logbook and return the container to where you found it. If you take something from the cache, leave something of equal or more value.

• Leave no evidence of your adventure except for your signature in the logbook. One of the tenets of geocaching is practicing “Cache In, Trash Out” or CITO. To really get in the spirit of geocaching, help clean up any trash you find along the way.

• Write about your expedition and share some photos with other geocachers —without revealing any important details of your find—at www.geocaching.com. Technically, it is not a completed find until you have pressed “send.”