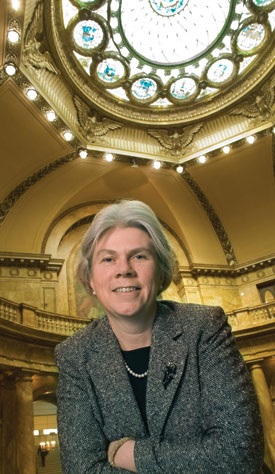 At the Statehouse, she serves on three Joint Committees: Judiciary, Housing and Higher Education. But at home in the Fourteenth Norfolk District, Alice Hanlon Peisch is the familiar woman with the distinctive black headband and striking white hair who constituents might run into at the grocery store, the library, or at Back-to-School night.

Her friends sing her praises, and it seems that almost anyone who has come to know her in the 21 years she’s lived in town considers her a friend. They speak of kindnesses unrelated to political favors, and of her thoughtful approach to the political issues she deals with.

Over a mug of coffee in the farmhouse-style kitchen of her home, Peisch acknowledges her husband Tom and their three children: Phil, Alice, and Andrew. “I would not be able to do this without the support of my family,” she admits. “Especially Andrew. Throughout his entire high school career, I have not been able to pick him up from school.” Andrew, the youngest Peisch, is a senior at Wellesley High School.

Even the older children – Phil who graduated from Dartmouth in 2004, and Alice, now a senior at Skidmore – have taken time to come back to Wellesley and support their mother.
“They get out there on election day and carry signs,” says their proud mother. “That’s been very important.”

Wellesley Weston Magazine: Can you tell us a little bit about your background, about who Alice Hanlon Peisch is?
AHP: My family is originally from the Boston area. I was born here but I grew up in Staten Island, New York.
My parents were big Kennedy supporters; I grew up in a home where the first television bought was to watch him be nominated at the Democratic Convention in the summer of 1960. There was always a lot of discussion in my home about politics, although my parents were not active participants other than being voters.
My family always came back to the Cape in the summer. Then I went to college in Massachusetts, in Northampton, and went to law school in Boston. I met my husband in Boston.
Eventually we looked for a community that had great schools and an easy commute to Boston. Surprisingly enough, there aren’t that many communities that had both. I have an aunt who lives in Wellesley, so Wellesley was the community I was most familiar with. We moved here in 1985.

WW: Then you were elected to the Wellesley School Committee and you faced some new dilemmas. How did you approach school redistricting?
AHP: I was originally elected in 1993. At that time, some modest additions had been proposed to five out of the six elementary schools (Sprague had not yet been converted into the seventh elementary school). … I can remember Karla (former superintendent Karla DeLeitis) getting out the enrollment figures. And I remember thinking, clearly this cannot be. We don’t have the space. We don’t have the money. The attitude was, let’s just wait a year and see if this is some aberration. But it wasn’t an aberration. When Karla left, one of the questions we addressed to each candidate for superintendent was: “How would you address this huge increase in the enrollment?” The first order of business was to deal with it.

WW: How do you decide how to approach situations like what happened back then? After all, it can become contentious. 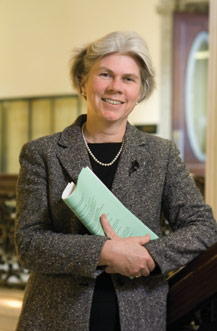 AHP: Well, the problem doesn’t go away while we wrestle with “Let’s find the perfect solution.” My view is that being right in and of itself isn’t good enough. That the best approach- the challenge- is to figure out and know when you’ve reached the point where this is probably the best you’re going to get, and then go for it. As opposed to holding out for something perfect.
Most of the time there’s no middle ground where you divide things in half. Or where something is so critically important that you can’t compromise. My view is that with compromise everyone is better off. You thrash it out. That’s the big difference between municipal government and state government. A partisan issue interferes with reaching a solution.

WW: Well, since you brought up the partisan issue and the state government, it leads to the next question. The Mass Scorecard rates Massachusetts legislators in comparison to the Democratic Party platform. In their last rating, which took into account votes through July 2004, they gave you a grade of D, or 60 percent, meaning you voted with the party platform for 17 of 28 votes.
AHP: (She laughs) I didn’t realize that I got a D! That’s a great example of the difference. There’s nothing wrong with having a political philosophy, but I personally don’t agree with every single thing that the party platform includes. There’s probably no one who agrees with every single thing.
The whole idea of representative government is that I answer first to the voters, not to the party. Not to the leadership of the State House.
It’s very interesting from a national point of view, and I think it applies to the state, too. The average voter is much more middle-of-the-road and not to either extreme. And the parties seem to be going more and more to the ends. On a variety of levels I think this is unfortunate and I’m not sure what the cause is.

WW: People who have worked with you have commented on your patience. Is being an extremely patient person a key to success in politics?
AHP: I think listening to what people have to tell you is the most critical attribute. It does take a certain amount of patience to be able to do all that listening, but in the long run, it’s more efficient to spend the time listening rather than to impulsively charge ahead and then be forced to backtrack.
I have learned that with an issue, the most important thing is learning to listen to find out where you are on common ground. Most of the time, if you can find that common ground, you can build something on that.

WW: Many constituents have stories of ways you have been able to help them that seem to fall far from what anyone would ever expect a legislator to deal with. Are there any problems you wish people wouldn’t bring to you?
AHP: There’s nothing I would not talk to someone about. The one thing different about being in the State House, rather than being in Wellesley, is that the issues you deal with in Wellesley affect almost everybody [in town]. There are things that I am dealing with now that I never would have dreamed that I’d be dealing with.
Controversial issues are the ones we like to deal with the least. Because inevitably with the decision on a controversial issue, you’re making some people upset. Of course you want people to like you. You want to keep people happy so they vote for you and you can come back and keep doing the job.
When you get to an issue that you know is going to be divisive, that’s a real challenge. We had a couple this past month. The press picks them up and they tend to sound bite. This term it has been immigrant issues. My first term it was same sex marriage. I never dreamed that I would be dealing with that.

WW: Your husband, Tom Peisch, is featured rather prominently in the book “Legends of Winter Hill,” by Jay Atkinson. Is it ever difficult to have two well-known people in the family?
AHP: (Alice laughs.) That book was written about a police detective that my husband worked with on a number of cases. At the time that those cases were active, he was certainly in the limelight. When we first met he was prosecuting a case that was on the six o’clock news every night. He’s very active and well known in the Boston legal community. Generally speaking, where our professions are most active they don’t tend to overlap. They kind of compliment each other. So it’s a non-issue.

WW: The inevitable question for a politician is, do you have plans to move on, to run for another office?
AHP: I like what I’m doing, I’m more than happy to stay with it and see what I can do. But who knows, if something else turned up I wouldn’t automatically say no. But I’m not looking for something else. I see with some of my colleagues that this is the first step on a road. They have their eyes down the road. I didn’t run for this position with my eye on something else. But this presented itself, kind of, I wasn’t anticipating it. And you never know what might present itself.