For more and more dads, there’s no place like home. 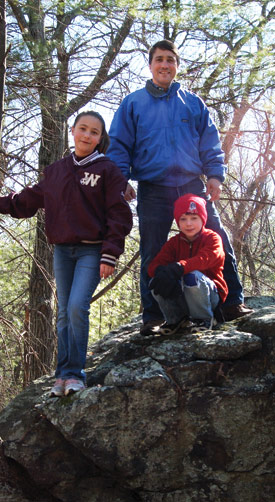 While information and advice about what defines the “stay-at-home-dad” seems boundless these days – Google alone produced 398,000 links that led to blogs, statistics, articles, and websites about the topic – one thing is clear: The tradition of father as sole income generator and mother as childcare provider is no longer the norm. Stay-at-home-dads aren’t just following a trendy fad. They’re breaking new ground as proven by the increasing number of men who have chosen the home and kids over the office.

Information about stay-at-home dads varies depending on the source and who defines the meaning behind the title. According to the US Census, from 1994 to 2004, the number of stay-at-home dads almost doubled from 76,000 to 147,000.

Stay-at-home-dad advocates claim far more exist than the 2004 number, however. They claim the agency began undercounting this group in the past few years because of the way it defines a stay-at-home parent. A dad who leaves the work force for less than a year isn’t included in the Census count. Neither is a father whose wife took time off, or a dad who earned money, whether from a part-time job or an at-home business.

A gray area still exists as to how many hours a father needs to be home in order to qualify as an at-home dad. More significantly, dads seem less concerned about that qualification andprefer to focus more on their family responsibility.

We spoke with three hard-working dads in Wellesley and Weston who often put in twelve-hour days and don’t receive a dime for their efforts. They cook, clean, drive car pool, coach, and help with homework, to name just some of their daily duties. Each of the dads we spoke with decided to stay home for different reasons, but they all agree that being able to take care of the kids during the day while their wives pursue careers at the office is an opportunity they heartily embrace.

“I say I’m the CEO of the family,” Wellesley dad Glen Magpiong, 45, jokes. “I take care of the kids, do the shopping, make sure everyone has dinner, and do everything that is supposed to be done around the house. I try to make my wife’s and kids’ lives as easy as possible. At the end of the day, I’m responsible for it all,” he says.

Scott Westvold, 45, a Weston dad who has almost nine years of managing childcare and home responsibilities, feels the same. While he admits it was a major transition, “like jumping from the pan into the fire,” when he left his job as an engineer for Raytheon to stay at home with his daughter Sarah, he says he’s never looked back.

Fifty-four-year-old Tom Russell is not completely convinced he fits today’s profile of a stay-at-home-dad, but he, too,made the choice to stay home a few years ago when he decided to start his own business, with an office in his home, and look after his son Connor.

“I realized the sacrifices I made over the past 25 years climbing the corporate ladder, relocating, starting over from scratch in new towns, and I pretty much missed my first three kids’ activities,” Russell explains. “Now I’m blessed with another child, and I’m able to take advantage of this opportunity. I can be at key events of his life and let work take a backseat for a while.”

Russell, who is a recruiter for the life sciences and biotech arenas, spent most of his previous career on the road as a sales and marketing professional. Meanwhile, his wife Rooney, who is now a senior consultant for a behavioral assessment company, cared for their three daughters, Molly, Casey, and Shaun, all of whom are now in their mid to late twenties.

“My wife is Hercules with long hair,” Russell says. “Rooney made all those moves as well. She set up the house every time we moved to a new location. She raised the children and she held either full-time or part-time jobs in those years too.”

Westvold agrees that his wife’s support was crucial to him succeeding as a stay-at-home dad.

“There was an awkward arrangement of Sarah’s daycare when she was younger that prompted me to think about saying at home,” he explains. “I asked Elizabeth what she thought about me staying home and she was open to it.”

Magpiong was a life insurance agent for 13 years in California before his family moved to Wellesley two and half years ago so his wife could pursue an opportunity with Bank of America. His wife has always had a solid career in the financial industry, but it was not as flexible as Magpiong’s job. As a result, he helped his kids, Shannon and T.J., get ready for school in the morning, and he took them to after-school activities too. 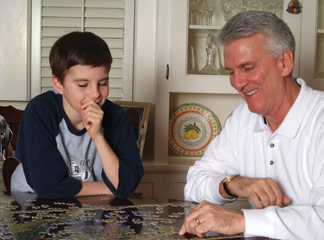 “During our move here, it made more sense for me to stay at home. I was able to make sure the transition was a smooth one for my wife and kids. My wife is more than cool with my staying at home too. Sometimes, I think she’d like to try it, but I think she realizes this is the right fit,” he says.

Magpiong’s schedule may no longer be filled with client appointments, but he needs to manage his day just as efficiently as anyone working in the corporate world.

In addition to this, Magpiong is training for an “Iron Man” competition in November. So he squeezes in a daily workout of running, swimming and biking before he heads to volunteer at McLean Hospital or teach kids (kindergarten through fifth grade) at the Wellesley Basketball Clinic.

“Then I’ll help the kids do their homework, eat dinner with them, and then we’re off to some sporting practice.”

Magpiong helps coach the local high school varsity basketball teamsas well, and he usually coaches the fifth and sixth-grade girl’s youth lacrosse team. Both Shannon and T.J. are busy with their own sports teams, so coaching gives him an opportunity to stay involved in their lives.

“My biggest challenge is probably figuring out how and what to cook, so I can have a hot dinner for my family since we all have such varied schedules,” he says.

When Russell started his business, Connor was already in school, so he felt it was an easy transition from the office to staying at home.

“I had to get used to picking up Connor mid-day. I had to get him to lessons and practices, and then make sure he got settled into his homework.”

The more involved Russell was with his son’s life, the earlier his day began and the longer it lasted. His workday starts at 5:30 a.m. and then picks up again later in the evening after his routine with Connor, which usually includes ski practice, basketball, baseball or play dates.

Westvold’s children are older now than when he first started caring for them full-time, so he has more to volunteer and coach. His routine also starts at 5:30 a.m. Then he shuttles the kids to school at 7:30, and picks them up at 3:30 and takes them to soccer practice.

“After that, I have to cook dinner, supervise homework and music practice, and then I fall flat on my face at 9:00,” he laughs. Somewhere in that schedule Westvold is also renovating his living room.

Russell says trying to balance this schedule feels more demanding than when he was working full time, but interacting with other adults at Connor’s sportspractices gives him the camaraderie he sometimes misses.

“It provides me with the social interaction I don’t have by not being in a corporate environment,” he says.

“I miss the intellectual challenge of the workplace,” Westvold adds, “but I fill that need in other ways.”

He focuses on understanding the psychology of his children and how to better support them.

“I’ve found this to be a very fulfilling part of my life,” Westvold says. “I enjoy experiencing everything my children go through and not being isolated from who they are, which can sometimes happen in the corporate world. I feel very blessed for this opportunity to be at home with my kids.”

“I don’t miss traveling,” adds Russell. “I enjoy being home every night, and I don’t miss the quarterly deadlines or meetings. After these many years, I finally found my niche.”

“I feel lucky to say I stay at home with my kids,” says Magpiong, “and I know people who think so too. My friends give me a hard time telling me to get back in the car pool lane, or don’t trip on my apron, but they’re also the first to admit that I’m a lucky man.”

Westvold, Russell and Magpiong each see this as a tremendous opportunity in their lives that many fathers can’t or won’t attempt, but they agree that anyone thinking about it should give it a try.

“It takes a unique man to accept and feel comfortable with staying home,” Magpiong says. “I think more and more men are looking at it and saying ‘you know I wouldn’t mind trying it. I wish I could do it.’”