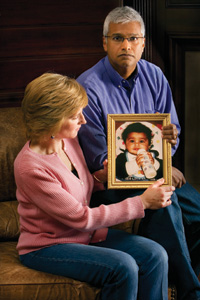 Sometimes life delivers to one family a blow so monstrous, and so momentous, that it’s almost too much for them—and their loved ones and friends—to bear. But sometimes too, the blow can become a catalyst. Instead of ripping the family apart, it propels them forward. In such an instance, family, friends, and community members harness their collective pain and rage and use them, in a systematic way, to prevent the same tragedy from happening to others.

Matty’s Legacy Then
In 1998, just one year after Debbie and Sunil (Sunny) Eappen’s 8-month-old son died at the hands of his 18-year-old nanny, the Matty Eappen Foundation emerged. It began as a group of family, friends, and co-workers met in the Eappen’s Weston living room, brainstorming about ways to memorialize baby Matthew. Many who were present had known Matty since birth.

The group knew much more than they had ever wanted to about the way Matthew Eappen had died. They had been through the perpetrator’s trial, and they had learned firsthand that Shaken Baby Syndrome, or SBS, was an especially severe form of child abuse, and a crime. The trial had made clear that prosecuting SBS cases is hard work. For one thing, the prosecution and sentencing guidelines for child abuse cases were (and still are) variable from state to state; while some states have mandatory sentencing guidelines for child abuse cases, Massachusetts does not. The group had learned that SBS wasn’t always an easy thing for doctors, social workers, or emergency medical technicians to diagnose; they needed better and more comprehensive tools and training to identify, for example, retinal hemorrhages.

Present in Matty’s case, retinal hemorrhages are uniquely the calling card of SBS; they cannot be sustained simply, for example, by rough play or a child’s fall. In order for retinal hemorrhaging to occur, a baby, with its still-delicate spinal cord and weak, undeveloped neck muscles, must be shaken violently by an adult.

Formulating A Mission
Clearly, there was a lot for the group to do. With all they had learned from this tragedy, they felt that it would be possible to wrest meaning from Matty’s death. Their goal was to save children’s lives and keep their SBS nightmare from becoming another family’s, as well.

“For one thing, we realized that we could do a lot to educate pediatricians and emergency room personnel to better recognize the signs and symptoms of a shaken baby” explains Debbie Eappen, Matty’s mother, and a physician. “High pressure in a baby’s brain can make the baby appear irritable, or vomit. It can also cause a baby to become lethargic. Without performing the appropriate diagnostic tests, mild cases of SBS can look, even to seasoned health care professionals, just like the flu.”

Educating new parents and caregivers seemed like another area where the group could really help. Creating and perpetuating comprehensive public awareness programs would go a long way toward giving inexperienced parents and others the strategies they would need to cope with the frustrations of early childcare. Additionally, supporting child abuse medical research, and providing funding to places like the American Prosecutor’s Research Center, the National Child Protection Training Center, and the work of attorney Victor Vieth at the National Center for the Prosecution of Child Abuse, would be key.

Debbie Eappen explains what was really driving the Foundation’s creation. “We needed to take control of what had happened…to do something positive. We wanted our kids (Brendan, 13, Kevin, 9, and Elisabeth, 7) to see that we shouldn’t be ashamed that this had happened to our family. We needed to try and do something for society, too. It’s true we couldn’t save Matty, but we could save and support others. One grandmother said this to me: ‘I didn’t choose Shaken Baby Syndrome. It chose me.’” Debbie pauses, then continues. “Bad things happen to everybody,” she points out. “Your life will be full of the unexpected. What are you going to do with it? Where are you going to take it from there?” 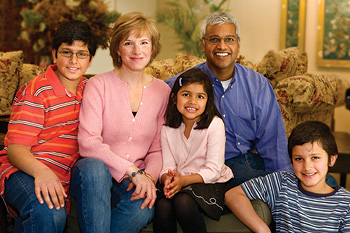 Getting Others Involved
Long before Matty was born, Paula McCue and Sunny Eappen attended high school together in Chicago. Because of their long and close alliance with the extended Eappen family, Paula and her husband Matt have been active in the Matty Eappen Foundation since its inception.

Matt McCue, who served as president of the Matty Eappen Foundation for six years, expressed his admiration for those who have pitched in from the Wellesley and Weston communities. “Many of Debbie and Sunny’s coworkers were from Wellesley and Weston,” he explained. “They really welcomed the Eappens into their midst during what was a very difficult, public, and painful time for the family.

I think Wellesley and Weston are unique; the people who live there have a real knack for being supportive and protective at the same time. And when there’s a fundraiser, they not only say they’re going to be there, but boom! They show up. Almost immediately, we had to move our biggest fundraiser to a different venue, because we ran out of room. These are towns that are filled with compassionate families who know a good cause, and really come out in support of it.”

Matt McCue stresses that the Matty Eappen Foundation is an all-volunteer organization. Since there are no paid employees, all of the funds raised go to the Foundation’s goal: to prevent child abuse of all stripes, but especially SBS. “We find out who in the medical, law enforcement, and prosecution communities needs seed money—grants—for their child abuse prevention programs,” explains Matt. “We really want to support those with new ideas.”

Recent grant recipients include Dr. Robert Reece, a forensic pediatrician who is developing an emergency room curriculum and protocols for the recognition and reporting of child abuse. With help from the Matty Eappen Foundation he writes, “we now have approval to become a subspecialty…Child Abuse Pediatrics will take its place among other subspecialties such as hematology, nephrology…and adolescent medicine.” Dr. Mark Dias, a pediatric neurosurgeon who is organizing a scientific conference on Abusive Head Trauma (of which SBS is a type), also receives funding from the Foundation. Dias’ groundbreaking conference is slated to take place in July, 2007.

Putting the “Fun” into Fundraisers
Weston residents David and Linda Ayer met the Eappens because their children go to school and play town sports together. “The Matty Eappen Foundation grows at a rate of about 20% each year. The Foundation needs to strengthen its endowment so that it can do its work in perpetuity,” says David. “There are lots of opportunities for community members to get involved.”

Currently, David is putting together the Foundation’s second annual Wine Tasting, to be held in October at the Weston Golf Club. “About nine Boston wine distributors bring in samples from their top wineries,” David explains. “Each distributor pours seven or eight high-end wines for tasting. The great thing is that if you want, you’re able to discuss the wines in depth, and order the bottles you love at a discount while you are there. It’s a lovely and casual social scene, with music and passed hors d’oeuvres. It’s a fundraiser for us, but it’s also a chance for everyone to reacquaint themselves with friends they may not have seen since the last event.”

Jen Queally is another Weston parent who is passionate about working with the Foundation. “The Eappens are wonderful people,” Jen says. “If this could happen to them, it could happen to anybody! SBS is deadly, devastating, and preventable. Our work means that Matty died for a bigger cause…to prevent other children and their families from becoming victims.”

Others feel the same. This past April, twenty-four Boston Marathon runners solicited donations for the Matty Eappen Foundation; each runner (including Debbie Eappen) raised at least $3000.00. Every year, about a week before the marathon, the Foundation holds its signature event: a huge party at Jordan’s Furniture of Natick or the Children’s Museum in Boston. Several hundred kids and adults come together for fun, food, music, and games, and all of the proceeds benefit the Matty Eappen Foundation and its work.

Matty’s Legacy Now
Sunny Eappen talks about the Foundation that bears his son’s name. “What strikes me is that all of these people at our fundraisers are helping to bring SBS out into the open, where we can actually do something about it. By talking to Debbie and me, to our kids and our parents, to all of our friends and family and to others around the country…that’s what makes SBS real, gives its victims a voice and connects us all. The Foundation has become a very dynamic and human tribute to our son and to all of the other victims, family members, and survivors of SBS, no matter where they are from.”

In the end, Sunny sums up his own thoughts about Matty’s legacy. “To expose the fact that it can happen anywhere, anytime…
sure, that’s a critical part of the Foundation’s work. And of course to that end, we can put up posters, print brochures, sponsor speakers and programs, and raise money for the greater good. But the most incredible thing about the Matty Eappen Foundation is that it enables us to make connections organizationally, and as individuals. The Matty Eappen Foundation brought us together…and now, it’s bigger than all of us.”