…and go gently into that good night… 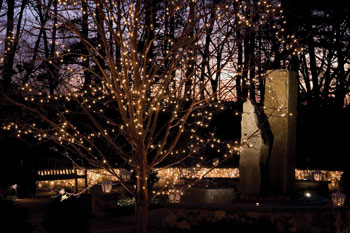 Is there really such a thing as a good death? In Wayland, a small but vital community institution that services Wellesley and Weston helps ensure that the answer can be yes.

Whether it comes upon us quickly or lingers on the margins of a long and happy life; whether we can count the days or surrender all at once at the end of a hard-fought struggle; death always finds us.

And how will it be for you and me? At home, comforted in the embrace of those we hold dear or perhaps in some less salutary place. Sixty percent of us will die in acute care hospitals. No wonder we are a people that seeks to endure – to grow old and older still.

Ask not for whom the bell tolls

We can fear death, welcome it, stand against it with all our might. “Do not go gentle into that good night/ Old age should burn and rage at close of day,” wrote Dylan Thomas.

Or we can seek to understand death; find ways to ease the burden it conveys; reach out to others, not only for solace, but for day-to-day things that suddenly matter so much: medications, clean sheets, calming music, or something so apparently simple as how to extend a welcome when the raising of a hand in greeting may be all the welcome we have to share.

This business of dying is complex, even after one has dealt with all the legalities, the cluttered attics, and the endless webs of relationships that make up a marriage, a family, and friendships – make up a life. And then there are the final days – the weeks or months called “passing” – for that is what we do when we die.

It is in that time that the idea of hospice may become a consideration for each of us. For however we go into that good night, there is information and support to be had, whether we determine to die home or in a residential hospice setting. Knowing about that option can be a comfort in itself, as those who have turned to Parmenter’s Wayside Hospice Care and its Miriam Boyd Parlin Hospice Residence in Wayland know. 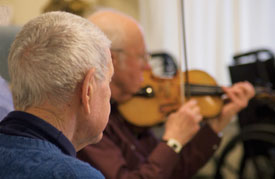 Life, as the saying goes, is a miracle, and for anyone with an appreciation for cosmic complexity and the tentative nature of human existence, of that there can be no doubt. Sometimes, surprisingly, miracles evolve rather than come upon us all at once. That most certainly was the case in the early 1990s, when the disposition of the old Paine Estate became an active topic of discussion throughout the Wayland community.

On the agenda were an extraordinary parcel of land and an imposing, old brick mansion. Traditions of Wayland, as the large assisted living and condominium residence eventually constructed on the east end of the property came to be called, ended up using the old estate mansion in a most creative way. Happily, Greenways, a substantial reach of open space that defined the old estate, was kept largely intact.

And now we come to the miracle: The leaders of Parmenter Com­munity Health Care suggested the assisted living facility might be best configured if it allowed for a small, residential hospice.

“Parmenter,” as it is familiarly known, has been a provider of nursing and other clinical services to Wayland and 26 other communities, including Wellesley and Weston, for decades.

“We’ve been intersecting with people around here for a long time at the most vulnerable points in their lives,” says Parmenter’s executive director. “People gave serious thought to the idea of a residential hospice as a complement to our home services; eventually, everyone agreed it was a good idea,” she adds.

And so, in 2001, Parlin House came into existence. Named for Mariam Boyd Parlin, whose adoptive family gave generously to its support, it is, as one would expect, a quiet, out-of-the-way place set virtually out of sight to one side of the assisted living facility.

Recently enlarged through the benevolence of supporters and furnished to accommodate ten residents, it is managed by a staff of nurses and aides with the assistance of a social worker, chaplain, bereavement counselor, and loyal group of dedicated volunteers.

“Skillful, discrete, and endowed with love and care,” are a few of the qualities often attributed to those who devote their time to this special refuge. But perhaps that understates the case. It bears noting that the operation of such a facility requires enormous logistical skill, administrative prowess, and unstinting amounts of patience and kindness. 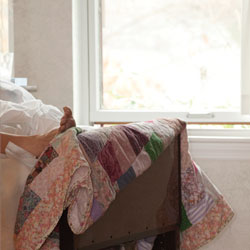 We all do the best we can in making healthcare decisions, but how to determine the circumstance and conditions of our own, eventual passing or that of a loved one? And especially so in the midst of the travail that might ensue were we to become disabled or subject to severe illness?

Parmenter has answered that question for many years as part of a home hospice program supported by Medicare and Medicaid, as well as private insurance. A skilled team, interchangeable with that assigned to Parlin House, goes out into the communities within its service area, lending care and comfort to dying patients and their families.

Most of us want to die in our own homes, but a majority, as noted earlier, will die instead in an acute care hospital, with others dying in nursing homes. Only a third will actually pass away at home.

Yet, others may seek a residential hospice setting, which speaks to that little miracle, again. Other than a facility in Needham, one must go to Cambridge or Worcester before encountering another residential hospice facility. With only nine in the state, there are not all that many from which to choose.

And how shall we pass?

Late at night, when a hush falls over Parlin House and the woods and meadows of Greenways; when one’s family has gone home and the last friend has left, when the television is shut off and the DVDs put away, the night nurses and aides go about their business, moving swiftly from room to room.

Pain levels are assessed and meds administered, skillful hands change sheets, give backrubs and soothing bed baths. Charts are filled out and records checked. A dish of ice cream or a favorite snack is retrieved from the kitchen. Then slumber, merciful, blessed slumber, comes upon the residents.

Much of the time, this image describes the routine well – but not always. One comes here to die. And in those final days and hours of passing, things begin to change.

Just as it should be, virtually everything that transpires here is explained, discussed, considered, and reconciled. Careful attention is the order of the day. Residents are given special comforts, held lovingly, sat with, and talked to. Small children are shown the diversions of a lovely play room, while adults have access to books and lounges, where inviting chairs promote reminiscence and a well-deserved nap.

The pain of loss expresses itself in all sorts of ways, but if there is one balm to stay the bitterest of losses it is knowledge – the kind gained from the rich wellspring of nurture and support, the kind offered by Parlin staff and volunteers. Now, one fully learns the meaning of the term “grief counseling.”

Can it be there is some special comfort and meaning in all of this? Answers can be found in the words of those who have turned to Parmenter-Wayside and their hospice programs. 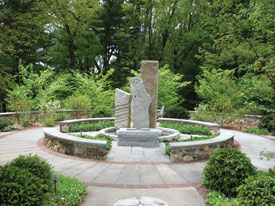 “Once a person reaches a hospice they are at a point of acceptance.”

“Mom was diagnosed with pancreatic cancer, which is exceptionally quick moving. She was adamant about not wanting to impose on our family. Highly independent and proud, she knew she wanted to be in a residential hospice. She started taking chemo at home and the doctors gave her three months, at best. She stretched that into a year and a half, and traveled everywhere with my dad. But then they were on a cruise and it became clear she could not go on.

At Parlin House she liked to sit in the Healing Garden. Friends would come and play the recorder. She was comfortable and her pain was controlled. We’d ride over from the house to be with her throughout the day. We had family suppers in the dinning room. In ways it was like being at home, not a hospital setting at all. But she was dying.

Once a person reaches a hospice they are at a point of acceptance; they know their destiny. Parlin recognizes this by offering a menu of resources. Along with the nursing staff, there’s a social worker and chaplain. There’s an understanding that each family has different needs. Care is individualized for the patient, but the Parlin staff looks after the entire family.

You know, I really needed some healing time. But about three years after Mom passed I started volunteering. Now, I come in on weekends to bake and cook, sit with patients and read to them, hold hands, whatever they need. It’s rewarding – tremendously rewarding.”

A good experience in a terrible time.

“He was just a wonderful boy, and there he was, not even thirty years old. I think of him every day and what I learned from his life. Your legacy is what people think of you afterwards.

He was an excellent writer, with a great interest in sports. In his junior year he was doing a semester abroad and came home for the holidays. He had a seizure. The MRI showed he had a large brain tumor in one of his frontal lobes.

He was very brave. At Dana Farber he went through surgery, radiation, and chemo and did fine for seven years. He graduated with his college class and got a job as an analyst with a retail-industry consulting firm. And then it started again. He wasn’t even thirty.

They started coming to our house from Parmenter-Wayside Home Hospice and provided all sorts of services. They made him comfortable and did physical therapy, administered medications, and showed us how we could help. It got our kids into the process, because he was the eldest and they wanted to be able to lend him their support.

It’s important to me to give back, to honor the kindness and support we were given in what at best was a terrible, terrible time. People need to know about Parmenter. It’s important.” 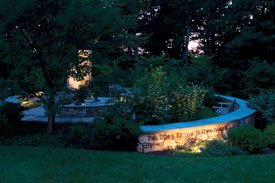 He has made a healing garden

He has made a healing garden here beside Parlin House for a sister who passed long, long ago – a sister he held dear. He prunes and weeds, transplants and thins, moving deliberately between ornamental trees, leaves riffling in the wind.

Within the garden are flowers and shrubs chosen for their meaning and long seasons of bloom; chosen for their scent and hue, especially in the fall when nature radiates with brilliant color, and then fairly or not, collects its due.

And looking on, on modest plaques, are the names of those whose lives have passed. Come June, new names will be added; new entries cast.

And in the week before Thanksgiving, with lights strung among the trees and with autumn now in full surrender, perhaps sixty or seventy gather in the Healing Garden to honor the memory of those who have passed away. Memorials are framed in the reading of names, a silent prayer, and a collective recognition of those who were held so dear.