The Islands of Maine “A World of its Own” 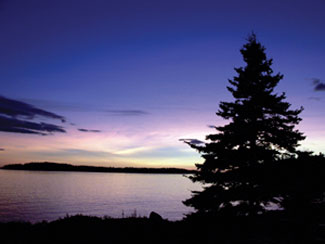 Margaret Wise Brown, summer resident of Maine and children’s book author (best known for Goodnight Moon) described the remote, rocky outcrop she could see from her home on Vinalhaven as being “a part of the world and a world of its own all surrounded by the bright blue sea” in The Little Island, published in 1947.

A time long before Brown made her observations about the area, Native Americans, including the early Red Paint People and members of the Wabanaki Confederacy, were the original “summer people” on Maine’s islands, returning for generations to the same camping and fishing grounds. In the mid-1800s, the natural beauty of the islands began to attract wealthy “rusticators” who built huge summer “cottages,” as well as artists and writers, like Brown, whose evocations of the sparkling light and craggy landscape continue to capture the popular imagination. Today, there are only 15 remaining islands with year-round inhabitants.

Below are glimpses of island vacation possibilities in three regions of the Maine coast, moving “down east,” which actually means “up the coast.” When ships sailed from Boston to Maine, the wind was at their backs, so they were sailing downwind toward ports to the east.

When the ferry’s departure whistle blows or the car breezes past the halfway point on the bridge, breathe a large sigh of contentment and leave your mainland cares behind. You’re heading for an island that is indeed a world of its own.

Casco Bay
Peaks Island, an easy 20-minute ride from downtown Portland on a Casco Bay Lines ferry (207.774.7871, www.cascobaylines.com), is a popular day-trip location. In the 1890s, it was called the “Coney Island of Maine” as resorts, amusement parks, theatres, and pleasure palaces sprang up. During World War II, up to 900 soldiers were stationed there as a line of defense against German invasion. Peaks is now a neighborhood of Portland, with 1,100 year-rounders and many more residents during the summer. Only two miles long and one mile wide, it can be easily walked or biked, offering great views of other islands, lighthouses, and the city across the bay. History buffs can check out the World War II fortifications or visit the Fifth Maine Museum(207.766.3330, www.fifthmainemuseum.org), built in 1888 as a summer retreat for Civil War veterans and their families. Lodging options include The Peaks Island House (207.766.4406, www.thepeaksislandhouse.com) and many summer cottage rentals, and restaurant choices are plentiful. Get up early to snag a cinnamon roll at Peaks Café (207.766.2600) on Island Avenue. 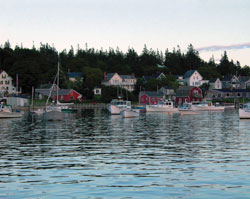 Bailey Island is at the end of a long peninsula and string of islands stretching down into the northern part of Casco Bay. At Brunswick, about 40 miles north of Portland, head down a 13-mile drive across Great Island and Orr Island, then cross the 1927 granite cribstone Bailey Island Bridge, listed on the National Register of Historic Places.The Driftwood Inn and Cottages sees vacationing families returning year after year to enjoy its rustic charm and picturesque, dramatic setting at the edge of a rocky shore (207.833.5461,www.thedriftwoodinnmaine.com) and Log Cabin Inn (207.833.5546, www.logcabin-maine.com) has famed hospitality and fabulous sunset views over the ocean. Opportunities abound to watch lobster boats – Mackerel Cove is one of the most photographed spots in Maine – and to enjoy the fruits of the lobstermen’s harvest. Cook’s Lobster House (207.833.2818, www.cookslobster.com) has been a fixture since 1955, and at Dolphin Marina and Restaurant, you can check out visiting yachts while you dine (207.833.6000, www.dolphinmarinaandrestaurant.com). Bailey’s Lands End, a spot where the rocky beach meets the crashing surf, feels just like its name. Just north of Lands End, visit the Giant Stairs, a series of huge boulders stepping down to the sea. The path can be a bit tricky to find – look for a small chapel and park in its lot. For an interesting day trip from Bailey, contact Sea Escape Charters (207.833.5531, www.seaescapecottages.com) to book a visit to Eagle Island, once the summer home of Admiral Richard Peary of North Pole fame and now a fascinating museum. 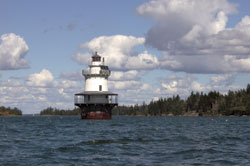 Penobscot Bay
Vinalhaven, a 12-mile, 75-minute ferry ride from the mid-coast town of Rockland via the Maine State Ferry Service (207.596.2202, www.maine.gov/mdot/msfs), is a working fishing community, boasting the largest lobster fleet in Maine. For almost a century, ending in the early 1900s, Vinalhaven was famous for its granite quarrying industry, supplying stone for the Washington Monument, the base of the Brooklyn Bridge, and the huge columns in The Cathedral of St. John the Divine in New York City. While its main harbor is a working waterfront, the island’s other “edges” are rocky spruce-lined shores, or pristine coves and basins where seals, seabirds, and eagles can be spotted. Enjoy the local seafood and island atmosphere in town; try fishcakes for breakfast on the dock at down-home Surfside (207.863.2767), crab cakes and blueberry pie at the Harbor Gawker(207.863.9365), and more upscale, though still casual, fare at The Haven (207.863.4969). For an adventurous and delicious evening, reserve a seat on a launch across the Fox Island Thoroughfare to Nebo Lodge (207.867.2007, www.nebolodge.com) on neighboring North Haven, where you can dine on locally farmed oysters and beef. Cottage rentals are widely available (check out www.vrbo.com and www.homeaway.com for rentals of a week or more), though some visitors swear by the unpretentious charm of the aptly-named Tidewater Motel (207.863.4618, www.tidewatermotel.com). The Tidewater also rents bikes and kayaks, two of the most popular ways to explore Vinalhaven. “Don’t miss” activities include swimming in the spring-fed granite quarries, hiking the spectacular trails maintained by the Vinalhaven Land Trust(www.vinalhavenlandtrust.org) or the Nature Conservancy’s Lanes Island Preserve, making a rainy-day visit to the Vinalhaven Historical Society Museum(www.vinalhavenhistoricalsociety.org), or driving to Brown’s Head Lighthouse with a stop to see the three huge wind turbines that provide Vinalhaven and North Haven’s electricity.

Matinicus: If you’re looking for a remote and rugged place to connect with nature, then Matinicus (“far-out island” in the Abenaki tongue) may be the spot for your next island vacation. The Maine State Ferry Service runs a boat from Rockland to Matinicus only four days each month during the summer; the trip is 23 miles and 2 ¼ hours. Alternatives are flying over with Penobscot Air (207.596.7500, www.penobscotislandair.net) from Owls Head or chartering a private boat in Rockland. About 50 people live on the island year-round, its children really do attend a one-room (though high-tech) schoolhouse, and no roads are paved. Its earlier reputation as a “pirate island” may have been deserved, but today’s independent, self-sufficient inhabitants work hard to make a living in a beautiful but sometimes harsh environment. Matinicus’ charms are all natural: bird-watching in the many areas of the island designated as sanctuaries, hiking on trails through the spruces, collecting shells or swimming at the two sandy public beaches, and watching the sparkling night skies far, far from any city lights. Off-island adventures include boat trips to see puffins on Matinicus Rock Island or kayaking to nearby Criehaven. Don’t expect restaurants, shops, or folks who cater to tourists, but do participate in island life by renting bikes at the small grocery store, buying treats from the newly opened bakery, or visiting the farmers’ markets and crafts fairs. 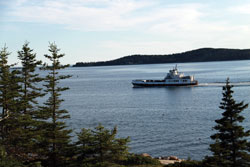 Mt. Desert Island
Bar Harbor, the largest town on the island, which is reached by a short bridge from Ellsworth, was originally incorporated as the Town of Eden in 1796, changing its name to Bar Harbor in 1918. In the mid-1800s, paintings by artists of the Hudson River School introduced society to the charms of Mt. Desert and, by the 1880s, the Bar Harbor area had become a summer mecca for prominent eastern families—Astors, Fords, Morgans, Carnegies, Vanderbilts, and Rockefellers—whose rambling “cottages” rivaled those in Newport. The Great Depression, World War II, and a devastating fire in 1947 that burned 17,000 acres and consumed most of the grand estates marked the end of the era of extravagant wealth. Bar Harbor today offers something for everyone – shops, restaurants, and hotels in every taste and price category; a vibrant art, music, and theater scene; every type of boating adventure you could dream up, from kayaking to nature trips to lobster boat rides to windjammer cruises. Here are a handful of our favorites: catching the sunrise from the top of Cadillac Mountain, the tallest mountain along the East Coast; excellent service and outstanding views at The Bayview on Eden Street (207.288.5861, www.thebayviewbarharbor.com); charm galore at the romantic Primrose Inn on Mt. Desert Street (207.288.4031, www.primroseinn.com); great seafood at the Burning Tree in Otter Creek (207.288.9331); the outdoor seating and fun, relaxed atmosphere at Café This Way(207.288.4483, www.cafethisway.com); winding down with a heavenly sunset sail on the four-masted schooner Margaret Todd (207.288.4585, www.downeastwindjammer.com). 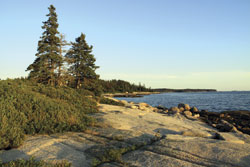 Acadia National Park: George B. Dorr, a lifelong conservationist, and Charles W. Eliot, former president of Harvard University, both from affluent Boston families, worked tirelessly to bring about this National Park, which attained federal status in 1916 and became Acadia National Park in 1929. Today the park protects more than 47,000 breathtakingly beautiful acres and includes 45 miles of motor vehicle-free carriage roads designed and funded by John D. Rockefeller Jr. The only lodging within the park is at two campgrounds: Blackwood, for which sites can be reserved at the National Park Service Web site (www.nps.gov/acad/), and Seawall,which is first come, first served; all sites are wooded and are within a 10-minute walk of the ocean. Visitors can spend days hiking the 125 miles of trails, which cover many terrains and varying degrees of difficulty. Ranger-led walks or boat cruises, bus and horse-drawn carriage tours by outside vendors, or a drive along the 27-mile Park Loop Road are less strenuous ways to learn about the park and enjoy the stunning views. Be sure to visit The Jordan Pond House(207.276.3316, www.jordanpond.com), the only dining facility within the park, and THE place for popovers and tea on the lawn overlooking Jordan Pond and the Bubbles, a pair of mountains on the horizon.