Tennis Anyone? Tennis Everyone! 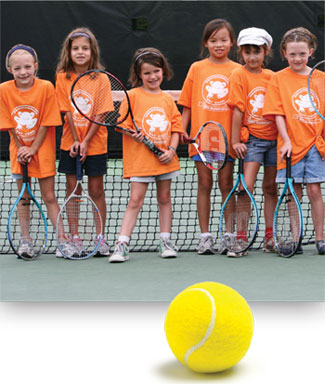 Judging from its popularity with both the young and old, tennis truly lives up to its reputation as a “lifelong sport,” and for good reason: you can burn calories; increase balance, agility, and coordination; and have fun at the same time. As head tennis pro Carel Pretorius of Wightman Tennis Center in Weston puts it, “The beauty of the game is that, at any one point in time, you could see five-year-olds having fun in a clinic, women intensely focused on a competitive match, and eighty-year-old men expertly slicing the ball for a rousing game of doubles — everyone, regardless of age or level, having a blast!”

Fortunately there are many venues – both public and private – for Weston and Wellesley residents to play this lifelong sport. Weston’s public courts are located at both the middle and high schools, at Burchard Park, College Pond, and at the Brook School Apartments. Wellesley’s public courts are located at the Schofield School, Bates School at Kelly Field, Wellesley Middle School, and the Hunnewell tennis courts on Route 16. The Hunnewell courts are lit for night-time play from mid-May until late October. To play under the lights, residents and non-residents alike must purchase a tag from the Recreation Department in the Warren Building at 90 Washington Street.

Jan Kaseta, Director of Recreation in Wellesley, supports Pretorius’ view of the universal appeal of tennis: “Tennis is one of the most popular programs we offer. And we are lucky to have two great instructors, Michael Sabin, the coach of the high school boys’ varsity team, and John Gautschi, the former high school varsity girls’ coach.” Douglas MacDougall, Director of Weston’s Recreation Department, echoes Kaseta’s sentiment about the game’s broad appeal and notes that in addition to offering instruction for kids and adults, the Weston Recreation Department also offers a clinic for senior citizens and another for adults with limited mobility at the Brook School Apartment courts.

As for private clubs in the two towns, there are several options: in Wellesley, the Boston Sports Club and Wellesley Country Club and in Weston, the Weston Golf Club, Pine Brook Country Club, and Wightman Tennis Center.

Wightman Tennis Center, named after tennis legend Hazel Hotchkiss Wightman (1886 – 1974), has a unique heritage. In a 1969 Boston Globe article, journalist and tennis commentator Bud Collins dubbed the new club, “A private club for all.” Collins elaborated on the club’s democratic approach to membership, unique at that time: “Color, race, religion, politics have nothing to do with entrance requirements.” Today, the same policy endures and 300 member families enjoy the tennis clinics, round-robins, lessons, and teams, as well as other facilities. “When I joined Wightman over 40 years ago, it was all about tennis. Now, people and families still join for the tennis, but also for the indoor and outdoor pools and the fitness facilities,” says Wightman member Les Silverstein. 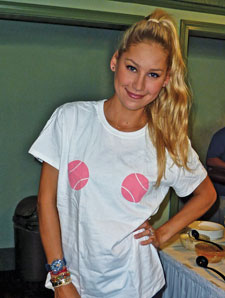 Tennis great Anna Kournikova sporting one of Didi Weinreb’s “Save the Girls” T-shirts to benefit breast cancer research. Save the Girls shirts are destined to be collector’s items, as Didi’s more demure design, called “It’s All About the Girls,” is the new style for 2011.

Another one of the clubs in Weston with tennis facilities, Pine Brook Country Club, boasts the 2010 winning USTA Women’s 4.0 National Championship team. The team was nicknamed the “Crazy-8s” by their competitors for arriving at Nationals in Tucson, Arizona last October with only the exact number of players to compete — two singles players and three doubles teams – while the other regional teams had 15 to 20 players. The Crazy 8s ability to beat the odds earned them a growing following at Nationals. Each time they advanced a round, the defeated competitors would join the Crazy 8’s cheering squad, all the way to their championship match against the Mid-Atlantic team. Four of the Crazy 8s hail from Wellesley and Weston: the first doubles team of Kerry Morton and Hilary Allinson from Wellesley and the second doubles team of Jill Tayabji Alpert and Michelle Garfinkel from Weston. Carol Amidon of Newton and Jill Alpert are co-captains of the Crazy 8s, and affectionately consider their team “The Bad News Bears.”

Not surprisingly, the public high schools in both Wellesley and Weston have impressive tennis programs and teams. 2010 was the first time ever that Weston’s boys’ and girls’ varsity tennis teams captured Division 3 state championships in the same season. For the girls, it was the second time in the school’s history, with the first in 1978. Chris Aufiero, Weston High’s Athletic Director, credits the coaches and the teams for their “incredible dedication and work ethic.” In 2010, Wellesley boys’ varsity team won the Division 1 State Championship after an undefeated season, while the girls’ varsity won sectionals, continuing their undefeated run in the Bay State Conference which began in 2008. Wellesley’s Athletic Director John Brown comments on the teams’ track records: “Both our tennis teams have had great success. In fact, the boys and girls’ teams have each won the Bay State Confer­ence all five years I’ve been athletic director.” The Rivers School in Weston also claims strong high school varsity tennis teams. Rivers Director of Athletics, James McNally, proudly points to the school’s well-coached, passionate teams: “Our boys won the 2010 New England Championship, Class C, and our girls are working hard in the Independent School League composed of 16 New England preparatory schools.” Dana Hall’s varsity tennis team plays in the Eastern Independent League (EIL) of 12 New England prep schools, achieving an overall record of 5-4 in 2010. Athletic Director John Suby calls the team “one of the most cohesive” and “always on the hunt for regaining the league championship” previously won in 2006. 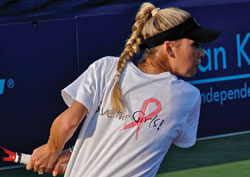 Beyond playing tennis for competition, exercise, and enjoyment, Wellesley and Weston residents are also making tennis central to their community service efforts. Twelve-year-old tennis enthusiast Ethan Bernstein from Weston wanted to find a way to use tennis to help other kids for his “mitzvah” or service project in honor of his Bar Mitzvah. Ethan and his mom, Sara Bernstein, located an organization called ACEing Autism, which provides tennis instruction to kids with autism. The organization was started by a husband and wife team – a tennis pro and a child neurologist focused on developmental disabilities — who both realized the need for affordable sports programs for children with autism. Every Sunday, Ethan plays tennis with 7- to 14-year-olds in the ACEing Autism program. Ethan loves helping kids learn how to hit the ball. But what he says he likes best is the bond he has forged with the kids: “There is one boy in the clinic who asks everyone else in the program their names each time he sees them, but he always remembers my name.”

Jennifer Lesnick from Wellesley volunteers for another local tennis-oriented non-profit called Tenacity. Founded in 1999, Tenacity provides tennis instruction, literacy, and life-skills training to at-risk youth in and around Boston. Jennifer explains her philanthropic choice: “I find Tenacity to be a great cause and perfect for me because of my love for tennis and my profession as an event planner.” In addition to helping plan their fund-raising events, Jennifer also teaches tennis to kids participating in Tenacity’s summer program. Jennifer has an impressive tennis “résumé.” She was a highly ranked junior player in the United States Tennis Association (USTA) New England region before heading to Cornell University for college, where she was played #1 varsity her freshman and sophomore years and was captain of the women’s team. Today Jennifer plays on the Division1 Dorothy Bruno team for the Boston Sports Club/Wellesley, and enjoys USTA tennis on a team hosted by Pine Brook Country Club. 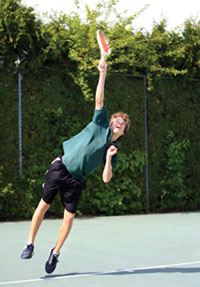 Wellesley’s Josh Suneby plays for Concord Academy and is an EIL Champion. In the fall, he will attend Connecticut College and plans to play on their team in the New England Small College Athletic Conference.

Jennifer joins other Wellesley and Weston tennis lovers committed to Tenacity, including Larry Greenberg of Weston who is in his sixth and final year as the Chairman of Tenacity’s board. Larry explains his reasons for devoting considerable time to Tenacity: “I was looking for an organization that was helping at-risk under-privileged youth…and that had a vision and a leader that could have real impact.” Tenacity certainly is having a powerful impact on many kids, including Michael Fedorouk, a rising star who reached the finals of the New England Junior Clay Court Championships last August. Michael got his start at Tenacity when his mother, an immigrant from Belarus living with her son in Boston’s West End, enrolled him in Tenacity’s summer program. Since then, Michael has earned a scholarship to Dexter, where he plays on the school’s tennis team. But in addition to being a serious student and tennis player, Fedorouk also gives back, volunteering himself at Tenacity and Charlestown Against Drugs.

Didi Weinreb of Wellesley is using tennis for the greater good in yet another way. Didi, the girls’ varsity tennis coach at The Rivers School and tennis director at Wayland Swim & Tennis Club, is a breast cancer survivor. During her recovery, Didi designed T-shirts and hats to raise awareness and funds for breast cancer. Didi has proof her efforts are working in more ways than she ever imagined. Didi was wearing her “Save the Girls” T-shirt on the way home from a radiation treatment when she was in a car accident. Soon after the incident, the other woman involved in the crash noticed a man also wearing a breast cancer awareness T-shirt, and took this coincidence as a sign that it was time for her to conduct a self-exam for the very first time. The woman actually felt a lump, which when biopsied turned out to be cancer. The woman contacted Didi to thank her for helping to save her life.

The next time you are looking for a little good-natured competition, exercise, fun, or even a way to help others, take out your tennis racquet, pop open a can of tennis balls, and head out to the courts!

For a comprehensive list of local summer camps, many of which offer tennis instruction, see the “Education” article on page 136 and visit wwmblog.com.