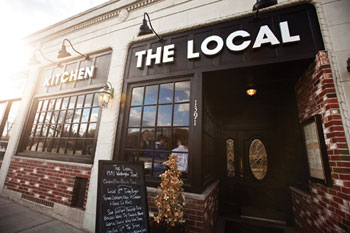 Since then, customer demand and market trends have turned their eatery into the opposite: “A good restaurant with a cool bar.”

The business partners laugh good-naturedly about the way their plans turned out. That’s easy to do when the dining room and the bar are both full by 6:00 p.m. on a Thursday night. Dark blue walls, hardwood floors, and a menu posted on a chalkboard keep the decor simple. The menu also sticks to basics but adds interesting accents. Crisp, bite-sized fries come sprinkled with Parmesan cheese as well as truffle oil, raising them up a level from pub grub. New England chowder comes with a drizzle of parsley oil, which gives it a surprisingly light touch.

Santo and Wynn also laugh about how they felt jinxed by bad timing when The Local opened in 2008, at the height of the recession.

“Everyone said we were crazy,” Santo admits. Yet he and Wynn, who met when their wives, who had become acquainted at Wellesley school events, introduced them to each other, believed that their venture could work. Santo also owns the successful Isabella restaurant in Dedham, which has given him 16 years of practical experience. Though Wynn, a health care investment banker, is a first-time restaurant owner, his father and other family members have owned eateries in Rhode Island, so he is familiar with the business. 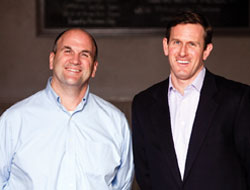 Enthusiasm tempered with practical experience seems to be carrying Santo and Wynn through a time when many restaurants are closing, or simply waiting until the economy improves. Operating as the Wellesley Restaurant Group, Inc., they feel confident enough to plan a second restaurant together in Providence, which they hope to open this year.

It was Wynn who found the spot in West Newton that became The Local on his way home from playing adult league hockey at The Fessenden School.

“I’m not good at hockey, but I do like going for a beer afterwards,” he says. The beer he ordered did a whole lot more than cap off the night. As he looked around, he saw potential, and he asked the owner if he would ever consider selling.

That night, the answer was no. A few days later, it became yes.

Santo and Wynn opened up the interior to take advantage of windows that fill much of the restaurant’s front wall. They put a wooden bar at one side of the room, and a main dining room at the other. There are seats for 20 at the bar and 70 in two dining rooms. The name “The Local” comes from what the British informally call their favorite neighborhood pub. 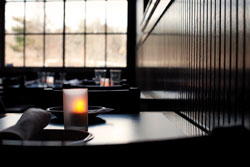 Santo and Wynn opened up the interior to take advantage of windows that fill much of the restaurant’s front wall.

“We wanted to create a place where we would like to come with our families,” says Santo. He and Wynn each have three children. Their idea works, judging from the parents and children in the early dinner crowd. Flatbread pizza with an extra-crisp crust, fries, and burgers prove popular with this crowd, but there is no specific children’s menu.

Instead, Wynn and Santo prefer a flexible menu, which starts with “Snack Things,” and progresses to “Bigger Things.” People have described The Local as a “gastropub,” a term from Britain that means a bar that serves good food, but Santo says that identity evolved over time, as food became a major attraction. On a busy night, dozens of orders for the truffle parmesan fries, crispy onions, and other “Snack Things” go to the bar as well as to tables. A signature dish, deep fried pickles with spicy mayo, tames a vinegary vegetable and turns it into something easy to eat with one hand. Traditionalists can go for the potato chips, which here are served warm with a French onion dip. Both come in metal containers lined with waxed paper, which makes for easy serving and sharing.

“Ninety percent of our customers at the bar order food. The bar often fills first, then the dining room,” Santo says.

Value is an important part of the concept, too. Prices go from $5 to $12 for appetizers and light fare, $10 to $15 for entrées. Every bottle on the wine list is priced at $28, which, says Santo, gives people an incentive to try new varieties.

New England ingredients figure prominently at the bar and in the kitchen. The beer list features Smuttynose, Allagash, Harpoon, and Mayflower, among other local breweries. Specialty Cold River vodka comes from Maine. Made from Maine potatoes, it has special appeal to any customer on a gluten-free diet.

Wynn and Santo turn most of the menu details over to Brian Counihan, Executive Chef at The Local and also at Isabella. He steams mussels in Bass ale with mustard and cream, then presents them in a bowl with sprigs of thyme and grilled slices of French bread on top for dipping in the rich broth. Another pub staple, the burger, described on the menu as “sourced by the Godfather of meat, John Dewar,” emphasizes quality. Basic mac and cheese is transformed into something more exciting with truffle and chives, or lobster and three cheeses.

Some entrées, such as pork osso bucco, cooked in a root beer reduction sauce, with roasted root vegetables and baby spinach, change seasonally. The lobster roll, marinated steak tips, and semolina-crusted fish and chips stay on the menu because they have become year-round favorites. Desserts also change seasonally. Pumpkin tiramisu topped with toasted pumpkin seeds might arrive in the fall, and amaretto-marinated strawberry shortcake in the early summer. A rich, comforting peanut butter pie stays year-round.

The formula – comfort food with interesting twists and seasonings – seems to be working quite well.

“At the end of the day, we have to do the simple things right,” says Santo. “Three page menus are difficult to execute. There’s a lot to the logistics in the kitchen on a Saturday night.”

The Local sponsors many youth sports teams, and both partners take time off to coach their children’s teams in Wellesley. Wynn volunteers for lacrosse, while Santo prefers Little League and softball.

It was community spirit more than glamour that drew Wynn into the restaurant business. “On a Friday night, I’m leaving the Financial District, and nobody is happy. I walk in here, and everyone is happy. This is a comfortable place,” he says, looking around with a smile on his face.