With her nonprofit organization, a Wellesley physician treats the bodies and souls of women who are homeless

Roseanna means doesn’t tell feel-good stories. Mostly they’re feel-better stories. Like the one about the small woman in her 60s who wears pink sweaters and looks like somebody’s 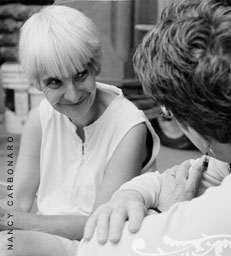 grandmother. One can picture her sipping tea in a well-appointed Wellesley kitchen. Instead, she lines up every evening with other women of various ages, nationalities and backgrounds to receive her dinner from strangers. No one in her family knows she is homeless, and she plans to keep it that way. In fact, she has strapped a certificate around her neck to show she has paid for her own cremation. In case she dies in the street, she doesn’t want her children to pay for a funeral.

There are many faces of homeless women in Boston, and it has been Dr. Roseanna Means’ mission to try to know all of them. No stranger to their individual needs, Dr. Roseanna, as she is fondly called by her patients, will be there as a doctor, a friend, and, if needed, a confidante. These lives marked by harshness and deprivation are far from “feel good” stories, but for hundreds of homeless women in Boston, at least one thing is certain: Dr. Roseanna will help them “feel better.”

For the last 15 years, Means has served the homeless population in Boston, first as a senior staff member for Boston Health Care for the Homeless, and now as the founder of Women of Means, the nonprofit she has operated since 1999. Bolstered by an initial $7,500 grant from the Wellesley Village Congregational Church, where she is a member, Means launched her organization out of her house. Last year, the nonprofit raised $350,000 through grants and donations to pay for overhead, medical supplies, and employees (Means takes a “diminished” salary, she says, and pays office staff and nurses). It provides more than $500,000 worth of free physician care with 5,000 patient visits a year, according to Means. The Wellesley resident travels to shelters every week to treat the women residents and oversees a group of volunteer medical professionals who provide free care, medicine, and supplies. They have to commit to a year of service, at least once a month.

“That predictability and familiarity is a really important statement to the women,” Means says. “We’re not telling them what to do. We’re there to mostly listen and to accept them unconditionally.”

Now coordinating the operation from her self-styled “world headquarters” opened in 2003 on Linden Street in Wellesley, Means wants to extend the model across the nation, planning to open a branch in Philadelphia this fall and in more cities to follow. That is in addition to her own part-time private practice in Needham and an appointment on the faculty of Harvard Medical School, where she teaches students and residents the challenges and, for her, the joys of serving a population that has often been invisible to the medical profession.

“She has brought the problem and the needs of homeless and marginally housed women forward and made them very alive so that many of the academic programs in Boston are eager for their students to have an opportunity to work in the shelter and learn from the program,” says James Sabin of Wellesley, a board member of Women of Means who directs the ethics program at Harvard Pilgrim Health Care and is a clinical professor of psychiatry at Harvard Medical School.
Sabin adds that Means shows aspiring physicians how to address patients’ medical problems and gain their trust: “She combines solid, substantial medical skills of the technical kind and great warmth and approachability so that people come up to her, guests of the shelter, and give her a hug.” 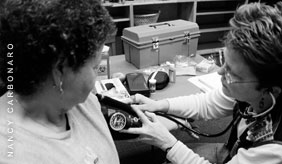 Means says she wants to get doctors out of the hospitals and to the shelters “to see what people’s lives are like.” She has seen their lives up close, and their photos adorn the walls of the Women of Means office along with photos of her husband and children. To her, they are not homeless women. They are her friends and extended family, women she cares for and cares about. She speaks matter-of-factly about going to dinner with a patient she treats in a shelter. Every year, she celebrates Mother’s Day at the Women’s Lunch Place in Boston, a daytime shelter for homeless and poor women, along with her husband, Peter Beaman, and sons Chris, 21, P.J., 19, and Willy, 16. The ladies line up to dance with her tall, good-looking sons. In turn, says Means, her sons get more than just attention from women.

“I think they have really good values about who people are and how to accept them on their terms,” she says. “I think they’ve all developed our values of helping people and giving back to the community.”

She has also influenced other young people, including interns from Wellesley College who plan to study medicine. Elsbeth Jensen-Otsu, who started working with Means in June, has learned how to take blood pressure and blood sugar levels and to communicate with patients who “can sometimes feel condescended to by people in the medical field,” she says.

“She’s taught us a lot about being a physician but also about being a woman and having lots of goals and wanting to do everything,” says Jensen-Otsu, “and she’s done it all. She’s had a really balanced and successful life.”

During her residency after graduating from Tufts University School of Medicine in 1981, Means treated refugees near the Cambodian border. A “child of the ’60s ” who demonstrated against the Vietnam War and wanted to help people in that region, she says the experience inspired her to help disenfranchised populations. Later, she would take her then young children to Costa Rica for a year to do just that. “I just loved it,” she says. “It was one of those experiences that resonates with you. I felt I could really talk to this population and that I had something to offer them. It was really a turning point in my life.”

When Means was in Costa Rica, Boston Health Care for the Homeless recruited her to run its inpatient program. Yet she says few women used the facility; they feared the homeless men who did, according to Means. The women, she says, don’t want to sit in a waiting room filled with men who had raped, robbed, and beaten them.

Determined to find how best to serve the women, Means quit her job in search of an answer. At the start, she went to the shelters and asked them what they needed. Some women would be direct; others would talk about a sore throat when they had bruises and cuts. Means learned to cut toenails, placing herself on the floor, humbling herself to her patients, she says.

“She recognizes what these women have been through,” says Grace Waruchu Wanjiku, a Wellesley College senior who has interned with Women of Means. “Some of them have been abused, and they’ve been in situations where it’s not easy for them to trust people. She has a real commitment and real care for these people that comes out. It’s not just medical care that she gives. She also listens to them in a way that lets them know that their stories are valid.”

Sabin says there is another side to Means: she is a fearsome advocate for her cause. Means, who jokes that she’s “bossy,” can recite statistics from memory of the number of homeless in the state and nation and chastises politicians, who she believes don’t do enough to help the people she serves.

Means has grown to revel in the small victories of women who may find some possibilities in lives gone adrift. The woman who worked as a prostitute, who overdosed many times and was close to death because of her lifestyle, eventually sobered up. The illegal immigrant with mental illness smiles in a photo, showing off a new set of teeth. A woman who used to be homeless secured an apartment. She had breast cancer 10 years ago and last year it reoccurred. With other doctors, Means went to the woman’s home and brought a picnic lunch and presents. For one day, she felt better and special, like a true woman of means.