Getting Older and Wiser 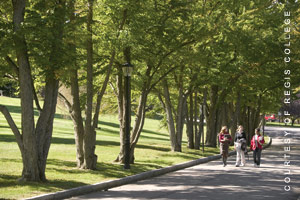 Sitting here in the classroom with Lianne Cronin, no one can guess much about her past. She is sixty-five, approachable and enthusiastic, and deeply interested in comparative religion. But it was just three years ago that Cronin retired at the age of 62 from a busy forty-year career. As unstructured time unfolded before her, she began to read. At first, she plucked books from her own shelves, books she’d lightly perused during her busy career and had put aside for another day. She read everything: fiction, non-fiction, Agatha Christie, gardening books. Then she turned to her stack of well thumbed National Geographic magazines and read the articles that went with the photographs. One day, a solicitation came from Regis College about a new Lifelong Learning program, listing seven courses for mature adults, beginning in the spring of 2005. The offerings were not the usual “Bird Carving for Retirees” or “Intermediate Quilting.” Best of all, the courses were offered during the day. She picked out two classes, sent her check, and jumped in.

Most Americans will live long past retirement, and as academics, professionals, and artists step out of the work force, they will joyfully discover the vital intellectual community that awaits them. Known as “Learning in Retirement” or “Lifelong Learning,” intensely academic programs designed by and for mature adults are appearing on college campuses to offer a rich curriculum for this burgeoning group. Lifelong Learning uses peer-led techniques to explore subjects in ways that are personally meaningful to the individual participants. So while the topics are as serious as any college curriculum, anecdotes from both the personal and professional realms of their compelling lives often creep into and enliven the discussion. Expertise and experience are respected and valued, but pedantry is definitely taboo, and this approach seems to be one key to pleasure learning for older Americans.

Lianne Cronin viewed the course offerings at Regis as a real opportunity to learn things she never had the time for before retirement. In the process, she hoped to learn more about herself. “I’m Boston Irish Catholic as far as I go back,” she says, “but ‘The Christian Roots of Anti-Semitism’ was an eye-opening course. Growing up, the only Jewish people I knew were the family that ran the local delicatessen, but I always felt that I had an open mind. My parents were from Cambridge and there were all sorts of people there. I was brought up without prejudice. Taking this course, I realized that I really had no idea what was going on. The stories participants shared about growing up Jewish here were heart wrenching. There was an awful lot I just didn’t know.” Her course on Islam was full to capacity, but six weeks wasn’t enough. Cronin is now enrolled in the second semester Islam course, which will run for nine weeks starting in the beginning of October.

Colleges and universities are delighted to provide the infrastructure, initially at no cost, to stimulate the growth of these programs that eventually become self-sustaining through membership dues. Institutions hope to benefit from the presence of the older, wiser set, and also hope to develop stronger ties to their neighbors. According to Bernard Shuster, a nine-year member of the Harvard Institute for Learning in Retirement (HILR) and a peer teacher as well, Harvard professors regularly volunteer to participate in the seminars. He said that this is mutually beneficial; HILR members have impressive backgrounds and are voracious readers. Their avuncular questioning and informed comments can provoke educators to look at material, especially history and psychology, in unexpected ways. HILR was the first program in the area, founded in 1977, and its popularity has spawned similar programs on college campuses including Tufts, Brandeis, Boston College, and Clark University. 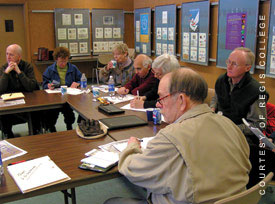 The most recent addition is Lifelong Learning at Regis College (LLARC) in Weston, established in the spring of 2005. The College hired Mary Dissette, a Regis College alum with expertise in older adult education, to create campus infrastructure for the new program while recruiting and mobilizing LLARC members. In essence, Regis College wagered that if it made the resources available, the elder campus community would blossom. With one dedicated administrator and a corps of volunteer retirees, in six months, LLARC had one hundred members, twelve courses for the fall semester, and a weekly “Lunch, Listen, and Learn” series available to paying participants.

A dedicated Lifelong Learner, Bernard Shuster came to Regis College from HILR to help get the program started. Shuster fits the profile of a great classroom mentor. He was a history major in college, but at some point as an undergrad, was convinced to pursue a career in law, and received an LLD from Boston University School of Law. Since retirement, he has led courses on Benjamin Franklin, Vietnam, McCarthyism, and 20th-century United States history, all things that catch his fancy. Mary Dissette commented, “Bernie is perfect for peer-led teaching because he really knows whatever topic he takes on. He brings to his classes his great enthusiasm for his subject and really conscientious preparation. He understands the edges of the subject and can ask the right questions to guide the learning.” It turns out that Lianne Cronin has first-hand encyclopedic knowledge of computer history. She earned a degree in mathematics from Regis College in 1961 and began work at Honeywell as one of the youngest computer programmers. Forty years later, she found herself to be one of the oldest employees by two decades at her final post at Stratus Technologies in Maynard. She’s participated in the evolution of computers since massive machines using punch cards were “faster than humans.” Talking to Cronin gives one pause; she quarries deep into time and recalls everything with passion. She is a great storyteller. Cronin is considering teaching a course at Regis, but she says, “Right now I just want to finally enjoy learning without having to fret about grades or papers.”

For Dr. William Rachlin, however, teaching is critical to the learning process. “You never really know a subject until you teach it,” he says. As a four-year discussant with Brandeis’ Lifelong Learning program, he was happy to lead the course, “Decision Making in an Era of High-Tech Medicine” at HILR. Rachlin practiced surgery and taught at Harvard Medical School for forty years until, with the turn of the millennium, he decided to retire. “I saw patients up to December 31st, but that last day was more about partying than medicine.” Like Cronin, Rachlin didn’t have a retirement strategy, but his daughter had graduated from Brandeis in 1978. He contacted the Lifelong Learning program there, and has been involved ever since. “Being in this program is like going to a high school reunion. It’s a self-selected group—everyone is enthusiastic, positive, alive.” Lifelong Learning at Regis College is unique because its inception is part of a broad and ambitious plan to bring mature adults permanently to the campus. Regis, with its preschool and older, non-traditional heritage scholars, has always been involved in learning at all ages. But in April 2003, it took the next step and formed a Senior Program Planning and Development Committee (SPPDC) to develop the program for a Lifelong Learning and retirement community on what is now known as the East Campus of Regis. The Regis retirement neighborhood will integrate the College’s mission, programs, students, and services with the developing concept of aging in place in a residential collegiate setting. This innovative model for learning will exploit intergenerational encounters for deeper learning and more meaningful exchange.

Intergenerational learning is at the vanguard of educational philosophy. One Lifelong Learning community at the University of North Carolina in Asheville offered “The Year 1968” to graduates and undergraduates as well, people who may have been born a decade or two after the year in question. Many Lifelong Learning participants volunteer to teach in the local grammar schools and high schools. Rachlin got a teaching certificate soon after retiring and Shuster has considered getting his. Cronin embraces the idea of age-integrating the classroom. “When I was fifteen, my mother’s friend needed someone to watch her mother while she went Christmas shopping. I’d never babysat before, but I was happy to grandma sit. I found this older woman so enjoyable; she had wonderful stories. I learn from everybody and I want to know what’s going on with the younger generations.”

Whether in class with 20- somethings or 60 -somethings, one thing is certain: Lifelong Learning students consider the classroom precious space. They have already paid their dues by living, working, loving, and surviving into retirement. To sit among newly minted colleagues and friends eager to learn, is considered a welcome gift, and to have the time to actually do all of the required reading is an added bonus indeed.